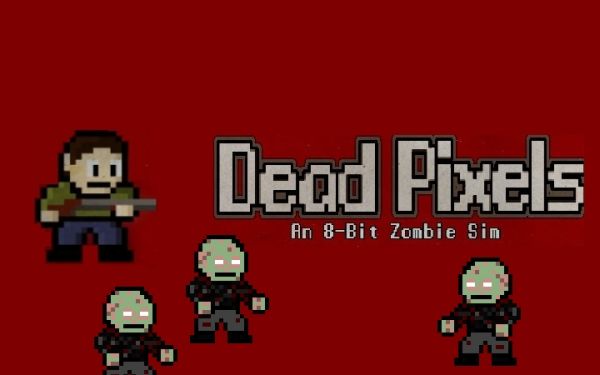 Retro-style presentation was charming once upon a time. I was once a sucker for modern releases that imitated the classics of my childhood. It was as though independent developers were saying, "We get you!" Unfortunately, as devs continually abuse trends, their effects wane. When that occurs, games have to be more than merely trendy attractions, which forces developers to produce titles with actual substance. In other words, it isn't enough for faux-retro titles to appear antiquated. They actually have to provide worthwhile material, lest they be shuffled to seemingly infinite list of forgettable, mediocre games.

Were you to select a random item from that lineup, you might snag an old school ape entitled Dead Pixels, a not-so-wicked fusion of Left 4 Dead's multiplayer zombie slaughtering and the ancient RPG-infused brawler River City Ransom. Visually, the game imitates NES's sprites decently, sporting simplistic, super-deformed character and enemy designs. However, there are some added graphical flares that weren't seen in the NES era. For example, the game's visuals appear sharper than your standard NES offering. There's also a noticeable sheen of grainy cinematography, reminiscent of Italian zombie flicks from the late '70s/early '80s like Lucio Fulci's cult hit "Zombi 2." Although some might argue that the added effects hamper Dead Pixels's retro stylization by providing more contemporary effects to what is supposed to feel dated, I rather enjoyed the more modern aspects of the graphics. It shows us that the developers are not totally stuck in the past, and are at least interested in crafting a game that accomplishes more than look the part of a retro title. 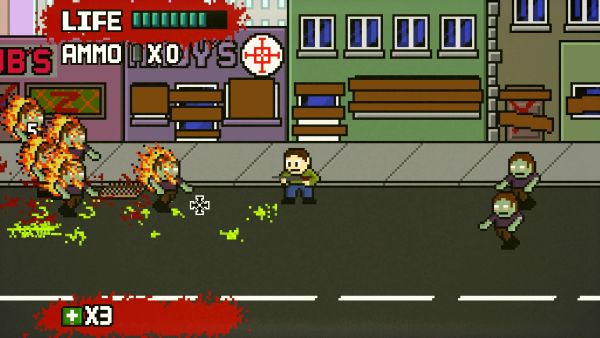 Such a notion might instill some hope into you, such that you might anticipate that Dead Pixels will deliver in terms of entertainment. You might think that maybe--just maybe--the developers accomplished more than slapping together aged graphics and tacking on some mundane mechanics. Unfortunately, such actually is the case with Dead Pixels. While the game's mechanics are fittingly basic, they're still too simplistic. Almost the entire game revolves around walking to the right and emptying your ammo into legions of shambling corpses. Occasionally you can enter a building and engage in some necessary looting, snatching up items to sell (some of which might be needed to complete an optional side quest for a merchant), ammunition, weaponry, and restorative goods. Selling loot leads to a fatter wallet, thereby allowing you to secure improved equipment and replenished ammo supplies, all so you can return to the streets to recommence the plodding shoot-fest whilst advancing to the right.

For the most part, you battle scores upon scores of the same zombies. Once in a while, the game introduces an unfamiliar foe in an attempt to keep the experience fresh and interesting, but such encounters are so infrequent that you wind up spending vast chunks of time offing hundreds of banal adversaries. To make matters worse, campaigns tend to be overlong, as they require you to traverse dozens of city blocks that are completely identical. There are no turns, corners, or any design quirks to any piece of environment. Every city block is a trudge to the right against mighty contingents of ghouls, repeated to the point that staying interested in Dead Pixels for more than an hour is arguably the greatest challenge the title has to offer. 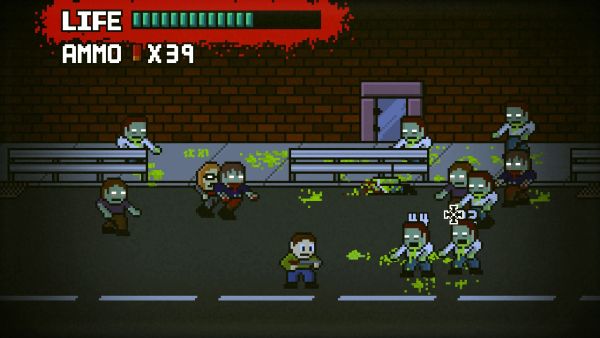 Like the aforementioned Left 4 Dead, Dead Pixels seems to be geared towards co-op gaming. In theory, banal 2D shooting is actually more fun when you have friends around for lewd jokes and laughter. Unfortunately, you'll likely find that you and your friend(s) are still playing a dull zombie game, just with more people around to sigh and make remarks about the fun-destroying repetition.

Part of what makes Left 4 Dead such a special game for many players is that it facilitates memorable experiences. Left's stage designs and wealth of zombies, not to mention its oft-chaotic gameplay, leave loads for room for hilarious happenings, desperate moments, and valiant displays of teamwork and camaraderie. Dead Pixels's dearth of complex design and its shallow rogues gallery render it a sadly lacking experience, through which few great memories can be made. To put it more bluntly, it's a vanilla zombie shooter masquerading as a nostalgic trip. 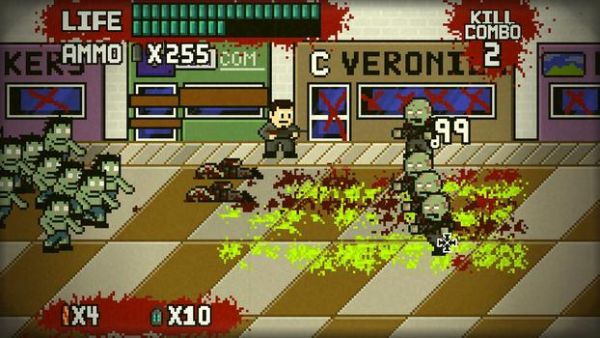 Independent developers would do well to remember why their customers play video games. Faux-retro titles can be charming, like Dead Pixels in its early phases. However, there's more to an entertaining video game than charm alone. When a game like Dead Pixels turns out to be a repetitive, wearisome experience, it comes off as a game developed for the sake of showing off aged visuals while accomplishing little else. Dead Pixels aims to be a tug on your nostalgic heartstrings, which makes it an even more painful game to play when you realize that it greatly emphasizes form over function.
2.5/5

If you enjoyed this Dead Pixels review, you're encouraged to discuss it with the author and with other members of the site's community. If you don't already have an HonestGamers account, you can sign up for one in a snap. Thank you for reading!

© 1998-2020 HonestGamers
None of the material contained within this site may be reproduced in any conceivable fashion without permission from the author(s) of said material. This site is not sponsored or endorsed by Nintendo, Sega, Sony, Microsoft, or any other such party. Dead Pixels is a registered trademark of its copyright holder. This site makes no claim to Dead Pixels, its characters, screenshots, artwork, music, or any intellectual property contained within. Opinions expressed on this site do not necessarily represent the opinion of site staff or sponsors. Staff and freelance reviews are typically written based on time spent with a retail review copy or review key for the game that is provided by its publisher.