If Shovel Knight had been developed and released during the 16-bit era, I believe it would have been about as successful as Rocket Knight Adventures or some other undiscovered platformer of its time. It probably would have done well enough to warrant a sequel, and there would surely be many gamers today who remembered it fondly.

The game wasn't released 20-some years ago, however. It was released late last month, and the medium has changed a lot in the span of time it takes a baby to be born, grow up, and perhaps have a kid of his own. Maybe they've changed enough that we'll all forget about Shovel Knight a week from now.

That would be a shame. Times may have changed, and "murder simulators" and MOBAs may be all the rage now, but there are certain gaming staples that should never be allowed to disappear entirely. Shovel Knight is an excellent reminder of that point. Not only does it look the part of a retro revival, but it actually plays like one too. Too often, it seems like retro-themed games are built that way because the developers don't have the means to do anything more complex. I didn't get that sense here. Underneath the 16-bit coat of paint--which is certainly attractive, in its charming, throwback way--beats the heart of a true platforming star. 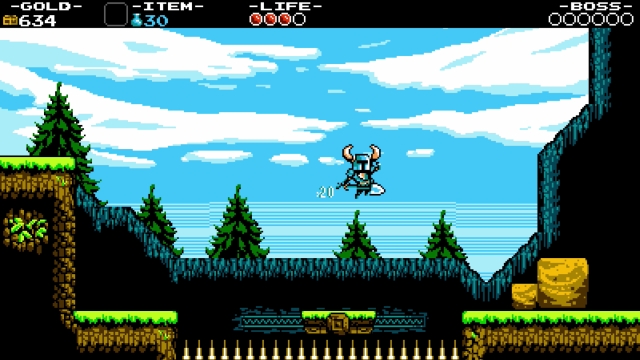 Shovel Knight is a wandering hero who faced a great tragedy when he lost his good friend, Shield Knight. The two companions had adventured together for years, and now they have been separated by a tragedy. Shovel Knight is locked outside an accursed tower, and his friend is lost somewhere within it. When evil begins spreading across the land, Shovel Knight picks up his trusty shovel and decides to make a journey to the tower. Along the way, he'll have to deal with the eight nefarious knights who together formed a group feared throughout the land as The Order of No Quarter.

As you play Shovel Knight, you shouldn't have trouble spotting similarities to classics from the medium's early days. Often, the game feels like something Keiji Inafune (father of the Mega Man series) might have developed. After an introductory stage, you appear on a world map and can advance through a handful of additional stages in any order you like, before unlocking a few more stages and repeating that process until finally you reach the tower. There's not quite the freedom that Mega Man titles offered, but you're not forced to tread a completely linear path if you don't want to.

Action stages are large and full of secrets. Mostly, you can find those secrets by hacking at suspicious walls or running along high ceilings. In that manner, the game reminded me of DuckTales. Like Scrooge McDuck, you're searching for wealth (which will allow you to buy upgrades from friendly villagers), but you're also looking for misplaced music sheets and for tools that can make your life easier. Checkpoints are conveniently placed along the way, usually just ahead of the next harrowing gauntlet you must survive, and just far enough apart to make you sweat. If you should happen to fall in a pit or take a step on fatal spikes or just lose the last of your energy because enemies were knocking you around and you couldn't find a wall that would break apart to reveal a turkey or apple, you can resume play from the last checkpoint you tagged as often as you like. There are no "lives" to worry about here, though you will want to return to the spot where you died so you can pick up bags of gold you will have dropped. 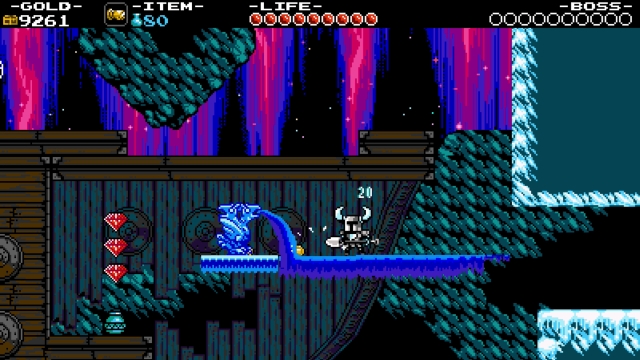 I should probably emphasize that the game can be quite difficult in places, to an extent that newcomers may find off-putting. It's about on par with some of the more difficult of the early Mega Man titles, but it's nothing you can't manage if you triumphed over such fare. Besides insta-kill spikes and bottomless pits, you'll face plenty of enemies that like to knock you back into the latter. There also are some fairly inventive sequences that test your mettle.

In one case, I landed on a mobile platform with a statue erected on it and had to hit the statue to send the platform flying forward. It left a rainbow path in its wake, and I had to run along that, continuing my abuse of the statue and using the ledge to reach the far side of a gap while I avoided natural hazards and archers. In another area, gusts of wind blew in various directions. I had to float carefully along them while crossing a spike-lined corridor. In a few instances, the foreground became a silhouette. I ran along ledges that weren't always as stable as they appeared, ferreting out false floors and steering clear of enemies that were well equipped to cut my adventure short. 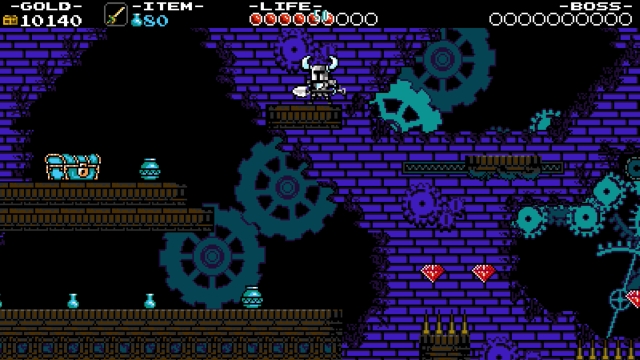 Thankfully, the abilities you find can make the journey easier. Eight special skills can be purchased, in addition to various other upgrades. I liked that aspect of the game, but I also felt that most of the upgrades were poorly utilized. There were some specific puzzle rooms and brief action stages where some of them came in handy, but a lot of them were barely even useful anywhere else. Thus, you can work through most of the game without worrying about gathering any additional gear at all. That feels like a waste, since you can't tackle the main eight stages in any order you might prefer. Doling them out two or three at a time allowed the developers to naturally ramp up the difficulty as you progress, but I would have preferred still more freedom.

Despite my few objections, though, I mostly enjoyed my experience and even wrote a Shovel Knight guide to help others do the same. The controls are a little bit looser than I would have hoped, but I found that I quickly adapted to them over the course of the adventure. The graphics aren't stunning, and yet there are some scenes that are beautiful just the same. As for the music, it contributes a great deal to the aesthetic. I still prefer old Mega Man compositions, but this is as close as I can imagine most games will ever come to that sort of sound.

Shovel Knight may go out of its way to feel like a relic from a bygone era, but the developers at Yacht Club Games were selective when determining which old conventions to revive. They cast aside most of the chaff and focused only on tasty wheat, minus the gluten. The result is a tightly constructed game that I would be quite pleased to see serve as the start of a new franchise. If any of what I've described sounds like something you might like, you owe it to yourself to take a look.
4/5

© 1998-2020 HonestGamers
None of the material contained within this site may be reproduced in any conceivable fashion without permission from the author(s) of said material. This site is not sponsored or endorsed by Nintendo, Sega, Sony, Microsoft, or any other such party. Shovel Knight is a registered trademark of its copyright holder. This site makes no claim to Shovel Knight, its characters, screenshots, artwork, music, or any intellectual property contained within. Opinions expressed on this site do not necessarily represent the opinion of site staff or sponsors. Staff and freelance reviews are typically written based on time spent with a retail review copy or review key for the game that is provided by its publisher.