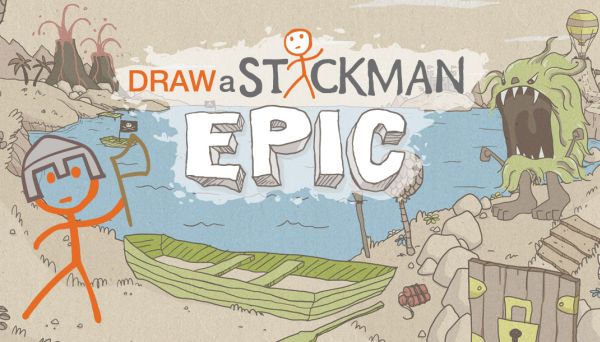 Draw a Stickman: EPIC knew that I am a crappy artist. Rather than expecting a modern Mona Lisa out of me, it commenced with a charming introduction that begged me to doodle a stick figure. I was thrilled to receive this gimme assignment, mostly because I have a terrific imagination (that is unfortunately hindered by shaky, unskilled hands). I attempted to sketch a muscular hero worthy of serving as my avatar, complete with ridiculous six-pack and bulging biceps. Once I transferred my imagination to the computer monitor, though, what I saw a collection poorly drawn circles, misshapen bits of elbow macaroni, and a failed attempt at an internet "rage face." In short, I was pleased with my sloppy video game proxy.

Protagonist invented, I now had to create a partner to accompany my hulking hero. Of course, the game didn't specify my would-be sidekick's sex, species, or medical condition, so I figured a cephalopodic wraith would serve as a magnificent buddy. So I patched together some rudimentary circles and squiggly lines, and thus Octoghost was born. With my not-so-dynamic duo brought to flesh, I couldn't wait to deck their world with horrible swoops and just-barely-adequate polygons.

Except that I had seen almost all the game had to offer in terms of actual drawing in that short intro... 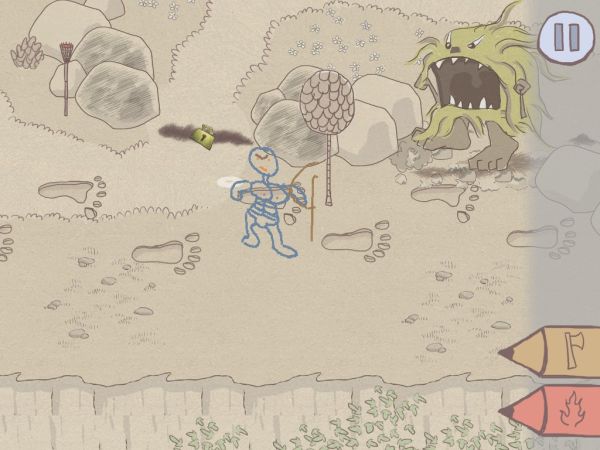 Once the cute prologue reaches its conclusion, Stickman begins a steady, downward dive. The game thrusts you into several stages of point-and-click puzzles that are only a tad engaging. You might, for instance, encounter a wooden fence obstructing your path or a swarm of bees. Dealing with the aforementioned fence is pretty obvious, as one of your abilities is pyrokinesis. To activate this talent, you only need to click on its icon and draw a flame. That poorly sketched pyre then ignites any flammable stimuli, like wooden fences. Removing the bees, on the other hand, requires a little more investigation. Doing so will lead you to small buds in the ground, which sprout into tasty flowers for the bees when you draw a raincloud over them. Once nourished, the plants act as lures for the buzzing insects.

Before long, Stickman's riddles grow wearisome, partly because you'll find yourself encountering burnable objects and locked doors, which require you to draw a key, ad nauseam. At no point do these hurdles present any more of a threat than when they were first introduced, so solving them is a matter of repeating the same simple actions. Also, any situation that demands further investigation doesn't require a terrible amount of sleuthing. The game's environment is, for the most part, bereft of unique features that might serve as red herrings. Because of that, if you encounter anything that seems out of the ordinary, you can pretty much bet that it's in some way involved in the level's puzzle. Typically, the game gives you one or two different abilities at a time, so there really isn't a lot of experimenting necessary when you spot a likely clue. So when you reach a certain level that houses a giant troll, you can easily guess that defeating him is a matter of luring him over to a cluster of large spiders. This becomes obvious when you realize that the beast is immune to your powers and that the arachnids one of two standout features in the stage. 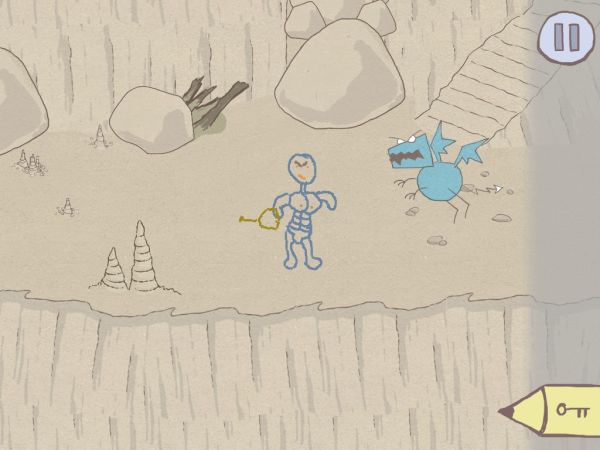 The act of drawing to conjure skills similarly becomes taxing. Suffice it to say that having to draw a quaint little campfire each and every time you want to roast something is the absolute pits. As you can imagine, I became lazy in my quest and decided to experiment. That's when I made a startling discovery: you don't need to actually doodle a flame in order to activate the pyrokinesis. I then decided to test this notion further. The fifteen-year-old that sometimes inhabits my skull stepped up to the plate and began drawing a long shaft, a bulbous tip, and a pair of dotted circles. Sure enough, after a few strokes (no pun intended) of my mouse, I had a big burning penis on my screen. A more rational side of myself experimented even further and found that a simple line can serve as a fire. There's no requirement to draw whatsoever. You make an ordinary line or any irrelevant shape and presto! Skill activated!

In other words, the game's selling point is unnecessary. If you constantly utilize it to its fullest, the experience grows tedious. However, if you decide to skip drawing in favor of a more practical method of executing spells, then you might ask what the frickin' point of integrating sketching in this game was in the first place.

Calling Stickman bland would be an understatement. The game's presentation is lovable at first, but after a while its dull background color and collection of vapid, hand-drawn environments only kill the excitement. Basically, Stickman is three hours of a sterile background color mixed with familiar trees, grass, and hilly terrain, sporting a shortage inventive or imaginative material. Sure, you occasionally see neat contraptions or murderous monsters, but such encounters are infrequent. I understand that the game's theme revolves around stick figures and crude, childish drawings, but that doesn't excuse its lackluster visuals and enthusiasm-sucking presentation. There had to have been a way to render environments that satisfy the game's motif while also instilling a sense of adventure into the experience and exuding imagination. Instead, it's a dull romp through hackneyed settings. 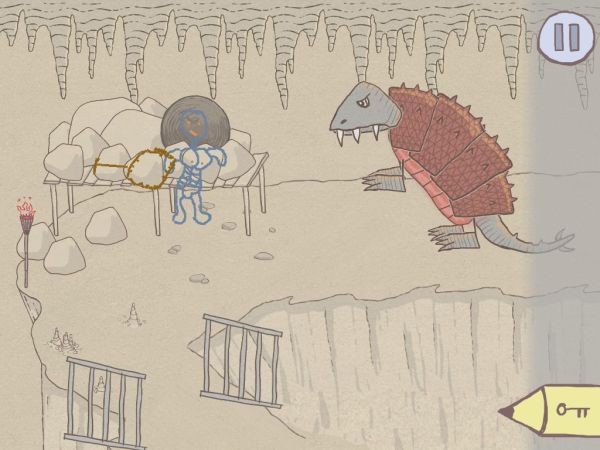 I'm not saying that Draw a Stickman: EPIC is an abysmal game, it's just a weak entry. Little of what it offers is worth experiencing, and can easily be found elsewhere with greater results. Long story short, nix Stickman and either snag yourself Scribblenauts or Drawn to Life. You know, drawing game that actually kind of utilize their gimmicks...
1.5/5

If you enjoyed this Draw a Stickman: EPIC review, you're encouraged to discuss it with the author and with other members of the site's community. If you don't already have an HonestGamers account, you can sign up for one in a snap. Thank you for reading!

© 1998-2020 HonestGamers
None of the material contained within this site may be reproduced in any conceivable fashion without permission from the author(s) of said material. This site is not sponsored or endorsed by Nintendo, Sega, Sony, Microsoft, or any other such party. Draw a Stickman: EPIC is a registered trademark of its copyright holder. This site makes no claim to Draw a Stickman: EPIC, its characters, screenshots, artwork, music, or any intellectual property contained within. Opinions expressed on this site do not necessarily represent the opinion of site staff or sponsors. Staff and freelance reviews are typically written based on time spent with a retail review copy or review key for the game that is provided by its publisher.