As I've gotten older and more cynical, it seems to me that there is one way for companies to ensure high ratings across the board for their games and that is to have a big enough budget to create something that is aesthetically beautiful. Bonus points if you can induce those magical comparisons to movies, either graphically or through dialogue. Reading reviews of these "blockbuster" titles almost reminds me of lemmings struggling to be the first to sprint off a cliff, as many of those games seem as shallow as they are beautiful with all the gorgeous locales and action movie-inspired characters unable to disguise their linearity and predictability.

So, when a game actually comes reasonably close to living up to its hype, I feel somewhat compelled to state that it deserves at least a good portion of its praise. While I don't know if I'd go as far as to call Red Dead Redemption one of the best games ever released for the Xbox 360, as aggregate review scores indicate, it was still a fun romp with only one thing I'd consider to be a glaring flaw.

Since this game was released by a division of Rockstar, it probably shouldn't come as a surprise that it could easily be described as Grand Theft Auto, except with a wild west theme. There is a large world to traverse and it's always easy to stay on point, as any pertinent quest-givers are denoted on the map. Every time you interact with one of those people, a short cutscene plays to set the stage for whatever task you'll be called upon to perform. And there will be a wide range of missions, ranging from simple ranch work such as breaking in horses and herding cattle to the sorts of bandit-obliterating you'd expect to see in a Rockstar game set in this era.

Also unsurprising, given the company, is that you'll be in control of an anti-hero. John Marston is not a good person, as he ran with a notorious outlaw gang for some time. When the game begins, though, he has undergone a new calling -- to find and apprehend his old running buddies. This isn't a task Marston particularly wants to do, but for reasons that eventually get explained, he has no choice.

His first attempt to capture one, a bearded brute named Bill Williamson, doesn't go according to plan, as he first is laughed at (for using big words) and then shot down (for not getting the hint Williamson wasn't going quietly). Fortunately, a somewhat local rancher happened to be traveling by Bill's base and she rescues the wounded man and nurses him back to health, leading to some of those ranch-related missions. Marston also sets out to find allies against his former comrade, enlisting the help of a reluctant marshal, a conniving snake-oil salesman, a demented grave-robber and an inept drunkard on an adventure that will wind up taking him all over the west, Mexico and Great Plains.

Pretty much everything about this game is self-explanatory for anyone with any experience with the more modern Grand Theft Auto titles -- even if it takes place in a far less populated area than those games' metropolitan settings. This leads to that one big flaw I noticed more and more the further I got into it. 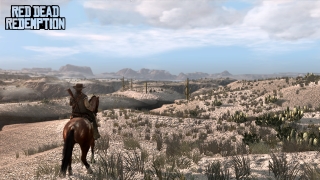 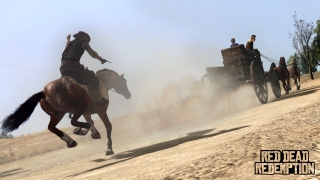 Overall, when it comes to sandbox games, I probably have the most experience with those by Rockstar and Bethesda and would describe those companies' approaches as "different, but equal". Rockstar focuses more on fast-paced action, while Bethesda is fond of building characters from barely-armed peasants into nigh-unstoppable forces of nature. Also, in an Elder Scrolls or Fallout game, you can access any building and communicate with any character not coded to be mindlessly aggressive at all times. Since a Grand Theft Auto game tends to take place in a large city, that's not feasible, so you're only given access to certain locations and random NPCs are more decoration than anything. You can shoot them, but are unable to enter conversations or hold any other sort of interaction unless they serve a specific purpose such as "shopkeeper" or "quest-giver".

The problem is that, in a lot of ways, the world of Red Dead Redemption is far more similar to one of those Bethesda titles. There are only a handful of towns, with only one of them that can be described as more than a smattering of buildings. The rest of the game: nothing but scenery. Sure, thanks to the typical great production values Rockstar has become known for, it all looks absolutely beautiful, but yeah, all that empty space with very little to break the monotony aside from random animal attacks or another dose of the same handful of random events designed to "liven up" those long horseback rides gets old after a while.

Around the time I got a little more than halfway through the game, I found myself just running from one story mission to the next, while ignoring virtually everything else. I stopped looking for hidden treasure caches, playing cards or doing any of the game's many challenges, such as picking various plants or shooting the hats off peoples' heads, in lieu of just sprinting through the story to see how John's quest got resolved. I found the game to be extremely fun, but taking place in an extremely dull world. Being able to interact with more than just the stuff that's necessary would have gone a long way towards inducing me to take my time and enjoy that nice scenery.

I'd say that, other than the story missions, the only things that really interested me were the Stranger quests and the gang hideouts. The latter tended to get me some nice rewards, including a handful of very useful guns. With the former, John would find himself communicating with and doing jobs for a number of eccentric people, with some of those missions leading to shockingly macabre moments. Or, at times, the sort of tedious fetch quest I've grown to despise, such as one where a guy trying to build a flying machine asks you to find a 10 of one kind of plant, 20 bird feathers and five beaver pelts. No dice, pal. NO DICE.

But me not finding this to be an all-time classic shouldn't be seen as that harsh of an indictment. John Marston was one of the more interesting protagonists that I've controlled as an outlaw attempting to reform himself who is continually reverting into his old lifestyle. While many of the supporting cast provide some deal of comic relief due to their various quirks, Marston is a no-nonsense, driven individual more than capable of carrying a plot that gets more serious and depressing the further one progresses. And with the exception of a brief dose of late-game tedium (something which is great as a narrative device, but not so fun to play through), doing the quests and advancing the story was pure fun. While I found a few missions to be challenging, nothing was particularly frustrating, as checkpoints were bestowed frequently enough that death was only a minor setback, but far enough apart that some skill was necessary to get from one to the next during longer and/or more intense gunfights.

One could easily call Red Dead Redemption to be the video game form of a love letter to classic cowboy movies. For the most part, this title delivers emphatically -- I just was a bit turned off by how lifeless its world could be under its beautiful exterior. As an immersive experience, I found it to pale in comparison to other sandbox titles I've played, but as an action title, it definitely delivers with its long and involving quest and entertaining group of supporting characters.
4/5

If you enjoyed this Red Dead Redemption review, you're encouraged to discuss it with the author and with other members of the site's community. If you don't already have an HonestGamers account, you can sign up for one in a snap. Thank you for reading!

© 1998-2020 HonestGamers
None of the material contained within this site may be reproduced in any conceivable fashion without permission from the author(s) of said material. This site is not sponsored or endorsed by Nintendo, Sega, Sony, Microsoft, or any other such party. Red Dead Redemption is a registered trademark of its copyright holder. This site makes no claim to Red Dead Redemption, its characters, screenshots, artwork, music, or any intellectual property contained within. Opinions expressed on this site do not necessarily represent the opinion of site staff or sponsors. Staff and freelance reviews are typically written based on time spent with a retail review copy or review key for the game that is provided by its publisher.