It sucks, but I know that if I continue to keep writing about Indie games, Im at some point going to have to address the huge price increase on titles ported from mobile devices to PCs. Some games justify the significant leap in expenses; Nihilumbra offered a perfect media transition from touch screen to mouse, an HD graphical update, the addition of a fully voiced narrator and the option to replay the entire game from scratch with revamped level design as well as a new game + skillset. On the other hand, games like Line of Defense offer the bare minimum in porting a title from iOS to PC, then ramp the asking price up astronomically despite the game now being a clumsily controlled mess. Weve been repeatedly asked to accept this practise as the norm; Im not a fan of this.

Ive offered a much guiltier example of this disturbing venture than 300 Dwarves has turned out to be, but lets all take a second to understand exactly what youre paying for. For a 700% price hike, were offered the same twelve levels of tower defences, a couple of extra missions as well a few greyed out ones with nonspecific coming soon! signs plastered across them, and a font thats actually readable. These things do lift it above the original mobile port, and the games far from awful, but its getting so hard to justify the price differences that most developers dont even bother to try and defend themselves anymore. They paint themselves powerless to do little but conform to this unwritten law. And were all slowly starting to accept it.

But this isnt an effort to crucify this particular game; my job in this role has always been, when boiled right down, to express what I think about a standalone video game and wrap my words up in finery. In that case, I dont think it unfair to suggest that there are free flash games that offer the same depth as 300 Dwarves floating around the Internet. The twelve levels that are offered are bright and colourful affairs, difficultly slowly spikes the further you advance, and successfully completing a level will offer you the chance to upgrade the towers you can employ. All five of them. 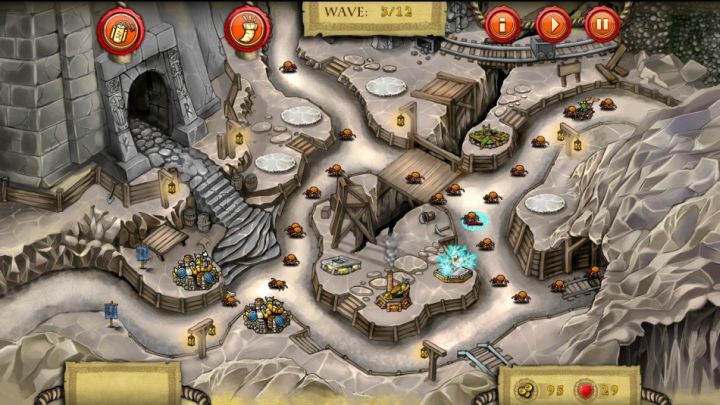 Was that mean? That was a little mean. Fact is, each of the towers can be upgraded to a prime version that, for the most part, does the same thing, but better. Fully pimp out a mortar, for instance, and your splash-damage cannon suddenly becomes quad barrelled. Turn your barracks into uber rangers, and they stop pelting the enemy with throwing axes or steins of beer and instead employ a huge ballista to rain arrows, instead. The forge stops belching out 360° flames and becomes a tower-tall flamethrower. which sounds awesome on paper, but actually makes it drastically less useful by sacrificing its area of effect attack.

You also have commander skills that allow you a map-wide tower boost, an artillery strike and the ability to place a sticky point that slows advancing units that all employ a cool down period before you can use them again. Theres also an impressive range of different enemy sets; initial forays all revolve around driving goblin hoards out of the kingdom. They bring with them hulking orcs and trolls that lumber towards the exit, but absorb a tremendous amount of damage. Other goblins with circumvent some defences by taking to the air in flimsy gliders, or try to speed through in simplistic karts. Delve further, and goblins become massive insects, lumbering undead or hellspawns. Though the majority are simply dressed up sliding scales of hit points and shuffle speed, you do have to plan your way around certain types. Mortars and forges are completely bypassed by flying units; giant spiders slow your war machines by spitting giant webs; zombie queens buff their minions. You can probably scrape through most maps on your first attempt and score a couple of gold bars to spend on tower upgrades, but perfectionists will want to return with buffed weaponary to make a play at unspoiled scores. Twelve maps dont sound a lot, but expect to spend about three hours conquering them all. 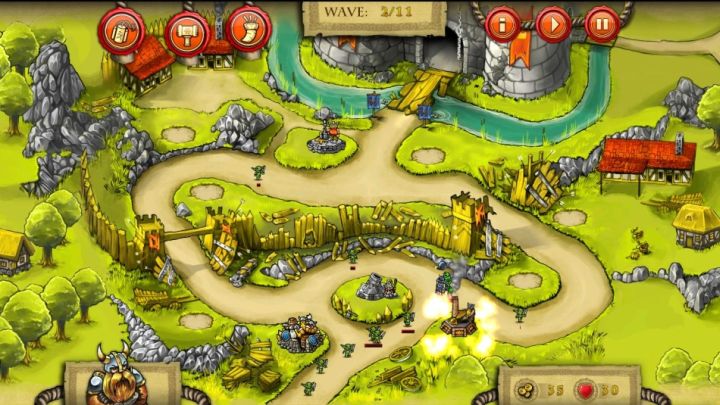 I dont want my negativity of the business practise 300 Dwarves has chosen to completely annul its worth, but I do very much want it to be tainted. Dont get me wrong: Ive paid more money for shorter games - Among The Sleep is about the same length and over double the price. But, on the other hand, one of these is a unique and terrifying adventure into the shadows that throws you further and further into a sense of uncertainty that was two years in the making. The other is a tower defence game. With twelve levels. And a 700% price hike justified by exactly nothing at all.
2/5

If you enjoyed this 300 Dwarves review, you're encouraged to discuss it with the author and with other members of the site's community. If you don't already have an HonestGamers account, you can sign up for one in a snap. Thank you for reading!

© 1998-2021 HonestGamers
None of the material contained within this site may be reproduced in any conceivable fashion without permission from the author(s) of said material. This site is not sponsored or endorsed by Nintendo, Sega, Sony, Microsoft, or any other such party. 300 Dwarves is a registered trademark of its copyright holder. This site makes no claim to 300 Dwarves, its characters, screenshots, artwork, music, or any intellectual property contained within. Opinions expressed on this site do not necessarily represent the opinion of site staff or sponsors. Staff and freelance reviews are typically written based on time spent with a retail review copy or review key for the game that is provided by its publisher.