Let's get this out of the way first - CONSORTIUM: Master Edition is a relaunch, and one that was badly needed. CONSORTIUM first popped up on the Steam store in January of this year. Its initial state was, frankly, a mess. Since then, a lot of work has gone into squashing bugs and getting the game to run properly. Now, after at least two major "bug fix" releases and a lot of "save incompatible" game updates, the Master Edition has arrived.

If you clicked this review because you'd already tried CONSORTIUM and just wanted to know if Master Edition is completely bug-free, then I'll save you some time and say that it's definitely not. While the big show-stopping crashes are patched out, the odd cabinet still won't open, models clip through scenery, and animations get stuck or just don't trigger. Sometimes the UI will hiccup and show the wrong character icon, and on one occasion during my play session, a character spoke her line twice (the first time with the wrong subtitles). What Master Edition offers is a playable and stable build, which is more than could be said in January. If you put it down earlier this year because it was so buggy, now's the time to give it another chance.

For the rest of you who missed CONSORTIUM the first time around, keep reading. 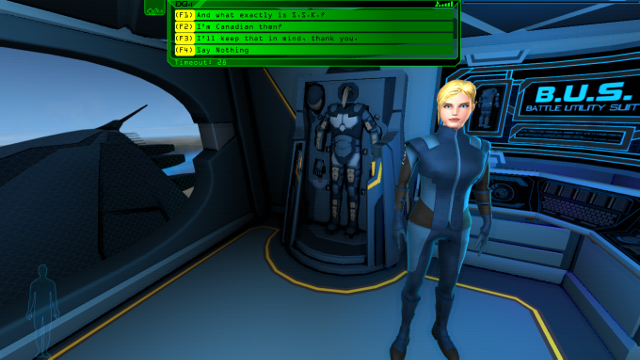 CONSORTIUM is not what you might expect. If I told you that CONSORTIUM is a science fiction action-RPG, you'd probably have a few assumptions about what I meant. You'd possibly expect a huge open world, or at least the illusion of one and some "hub" locations. You'd anticipate some kind of branching narrative, maybe with a binary alignment mechanic. And you'd expect a motley troupe of supporting characters who follow you around even if you're a complete jackass to all of them.

What you might not expect is for characters to get annoyed when you pump them for exposition. Allanah Boyle, the very first NPC you meet, acts at first amused and then increasingly irritated when it becomes clear you haven't the faintest idea what's happening. The harder you press her for exposition, the more irritated she becomes, until finally she has you to report to the infirmary to get your head examined. It's an unexpected subversion of a staple RPG convention; NPCs who will fill you in at the start of the game to make sure you know who you are and what you're doing. How many times during your day does a co-worker approach you for a quick As-You-Know chat? It's necessary to fill the player in on the role they're assuming, but it breaks the fourth wall to do so. CONSORTIUM refrains, ironically, because it shatters the fourth wall from the word "Go." 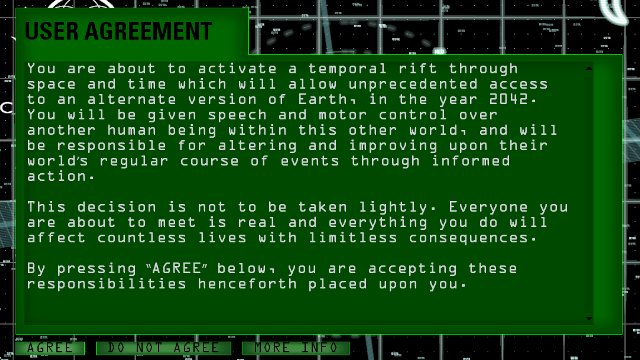 CONSORTIUM casts you as yourself. More accurately, it casts you as yourself mind-controlling somebody in an alternate universe, through a program on your computer. You-as-yourself-as-someone-else are a member of an international peacekeeping organization, the titular Consortium. But what you don't do is fly around in your Crazy Future Airplane shooting terrorists and cracking wise. The entirety of the game takes place aboard the ship, in transit to somewhere else. There's some gunplay here and there, but there's a bigger emphasis on character interaction. Not including yourself, the Zenlil carries a crew of sixteen. I spent my entire first hour simply exploring the ship and talking to people.

It's kind of refreshing to play an RPG where the focus is not on combat, and its equally refreshing to play one where dialogue doesn't feel like a chore. I mentioned before that the game tries to get away from interrogating NPCs for exposition. Another thing it does is present conversations not as dialogue trees, but as linear exchanges. There's an effort to paint Zenlil's crew as real (or at least believable) people in a larger world. They can spare a few moments to talk, but they can't stand around for hours while you grill them on every detail of their life story. They have work to do. 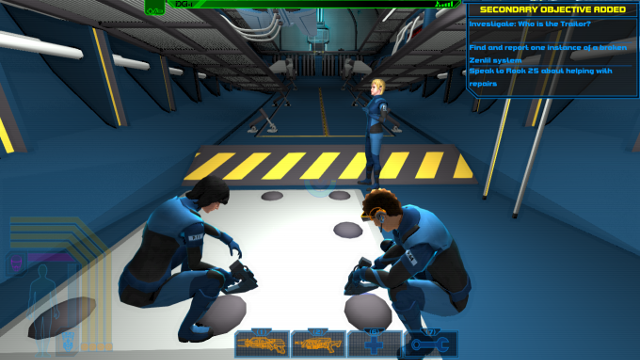 Conversations with the crew feel like vertical slices, and even in these brief exchanges, each character's personality comes across strongly. It's easy to get a sense of who these people are and what they care about (handy, since one of your first big tasks is to determine which of them is a murderer). Early on, someone dies in suspicious circumstances, and you-as-yourself-as-someone-else are charged with conducting an unofficial investigation. That elicits a mixed response from the crew, with some members happy to help and offer leads, while others just want to be left alone to do their jobs.

The writing quality varies a lot, with the worst example being the ship's medic, Rook 13. He's written like he's supposed to be The Spock, and to his credit the voice actor delivers 13's lines in perfect deadpan monotone. However, the character comes across as boring at best and irritating at worst. Throughout the game, you have the option to vaguely hint or flat out tell people around you that you're a time traveler from 2014, with varying responses. Rook 13's response is to inquire, without a hint of sarcasm, whether you arrived in a telephone box. He then proceeds to take you at your word. Other, more likeable characters have only the occasional cringe-worthy line. 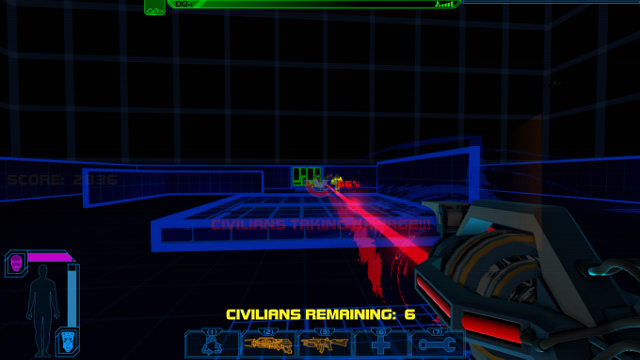 When the shooting starts, CONSORTIUM's combat is functional but nothing special. There are a couple of weapons to use, and they're fairly well distinguished from one another. It's not spectacularly engaging but it's not a chore, either. Thats just as well, because aside from trips to the VR training room, there's only one real gun battle in the whole game. Its a battle you can actually win without even firing a shot, if you say the right things leading up to the encounter. Though that sounds like it's the "good" option, youll find that's not necessarily true; killing the mercenary leader in a firefight earns the disapproval of the Consortium brass, but taking him prisoner causes more serious complications later.

CONSORTIUM's biggest failing is that there's simply not enough of it. All told, one trip through the campaign clocks in at about 4-5 hours, and it all ends with a cliffhanger. The player is encouraged to go back and start a new session to see if he or she can't uncover a few of more plot threads that were missed the first time. In another game, this might cause some to accuse the story of being needlessly obtuse and requiring what amounts to meta-gaming to parse, but remember CONSORTIUM's premise: you aren't Bishop 6. You're you mind-controlling Bishop 6 via an inter-dimensional rift on the other end of an internet connection. Is it therefore "meta-gaming" to start a new game and act on information Bishop 6 shouldn't have? Or is it just part of the larger meta-narrative?

Is your head starting to spin yet?

CONSORTIUM could easily have been another bargain bin FPSRPG with a forgettable gimmick, but instead it's a rare example of a game that tries something new and commits to it, rather than simply slapping on a gimmick for the sake of a gimmick. If I can put on my "Games R Art" hat for a moment, let me just say that CONSORTIUM deconstructs the very idea of a video game. That alone is worthy of praise. 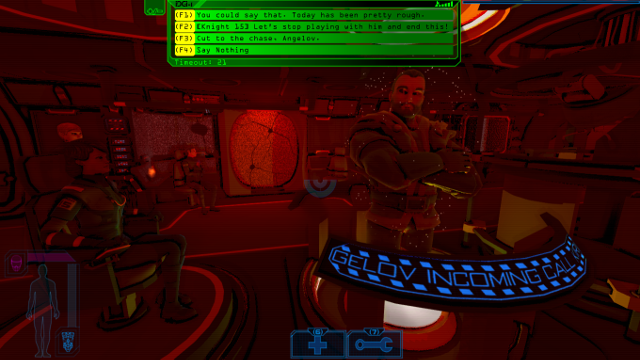 But it's also the first chapter of a larger story, and it ends as abruptly as it began. There's a plethora of hooks and decision points for the next game to clamp onto, but in the absence of that next game I can't judge how well they're handled. Remember that Mass Effect won praises for its branching plot threads, but part three took a lot of flak for the manner in which it resolved them. CONSORTIUM doesn't resolve much at all. It ends, quite literally, in freefall. Without the next chapter, Id have to say it falls flat.

As a video game, CONSORTIUM bets the bank on eventually having a sequel that may never happen. But as an experiment with the medium, it's happily worth experiencing even if that anticipated follow-up never actually materializes.
4/5

If you enjoyed this CONSORTIUM: Master Edition review, you're encouraged to discuss it with the author and with other members of the site's community. If you don't already have an HonestGamers account, you can sign up for one in a snap. Thank you for reading!

© 1998-2020 HonestGamers
None of the material contained within this site may be reproduced in any conceivable fashion without permission from the author(s) of said material. This site is not sponsored or endorsed by Nintendo, Sega, Sony, Microsoft, or any other such party. CONSORTIUM: Master Edition is a registered trademark of its copyright holder. This site makes no claim to CONSORTIUM: Master Edition, its characters, screenshots, artwork, music, or any intellectual property contained within. Opinions expressed on this site do not necessarily represent the opinion of site staff or sponsors. Staff and freelance reviews are typically written based on time spent with a retail review copy or review key for the game that is provided by its publisher.