Half Minute Hero: The Second Coming is carefully orchestrated chaos. It is, at its core, frantic slices of old-school RPG action bookended by massive lumps of old-school RPG text dump. Its kind of satirical of the grind-fests at old, but its that special kind of satire we dont see enough of that manages to stand strong on its own merits while poking fun at its foundations. Its inventive and clever and, thankfully, has a skip key for when all that text starts to crush you in sheer weight. Its also crazy long thanks to an embarrassment of options, which would make its very title an oxymoron if it wasnt also completely accurate.

To summarise the chaos is a bit of a task, but its my job, I guess, so Ill give it a go. Youre dropped into one of many dungeons, told the world will end in thirty seconds, and then tasked to see off the big evil lurking in his castle before the timer hits zero. In between this, you need to grind levels, purchase new equipment and often solve small mysteries that bar you from progression while the time ticks down in the background. This would be an impossible task, but youre gifted with convenient magical assistance. You can rewind time back to the start by leaving offerings at Goddess Statues littered across the world. The downside to this is that the cost of each reset steadily climbs, and theres not always going to be enough time to farm the gold needed to keep the loop running forever. At some point, youre going to need to make a run at the boss  but are your levels high enough? Is your equipment up to standard? If not, youll have to purchase upgrades, but this takes precious gold away from potential resets. 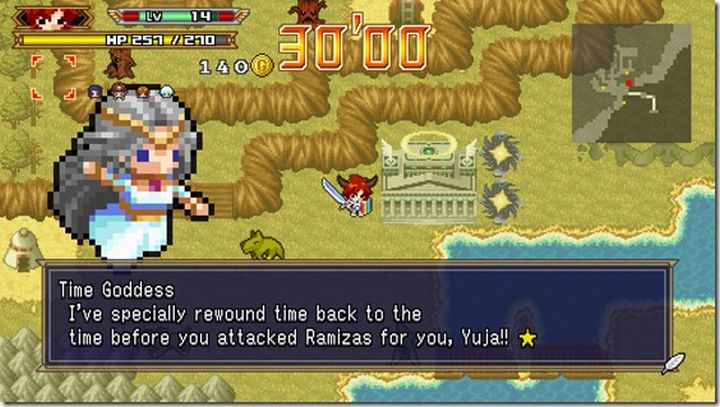 What unfolds is a desperate dash from town to town, completing simplistic tasks and charging recklessly through enemy encounters in the hopes youll make the next reset point in time. Half Minute Heros a frantic juggling act; you know that you need to get stronger, you know the heavy value gold represents, but the village elder refuses to give you the McGuffin needed to advance until you clear the monsters from yonder cave. That Lancer master refuses to teach you his ways until you catch him a squid, then cook it to perfection. That wood dragons going to totally blow up the world, but you need to burn down all them pesky sentient weeds before you can reach him. That monster over there is a tower block tall; better pelt him with cannon balls then finish him off with your walking castle.

The main foundation offers little variation throughout the title, but its these silly little missions that keep things feeling fresh. One operation has you belting around a map trying to earn more money that a spoiled neighbouring princess speeding around on a high-tech hover board. Perhaps your angst-ridden rival will challenge you to a monster-slaying tourney set against a field of finite enemies. Maybe a kings castle comes under heavy attack and rather than trying to wrap everything up in thirty seconds, you instead have to make the clock reach zero without the walls being breached. A mission early in the game pits you against a gang of villains who have not only kidnapped random villagers, but are still harassing shop owners casually in the background. Want to buy equipment? You need to fight them off. Want to buy herbs? Sorry; they stole the entire stockpile and are keeping it in a cave to the West. Want to reset time? Tough; theyve pinched the bloody Goddess statue too, and have hidden it in the forest. 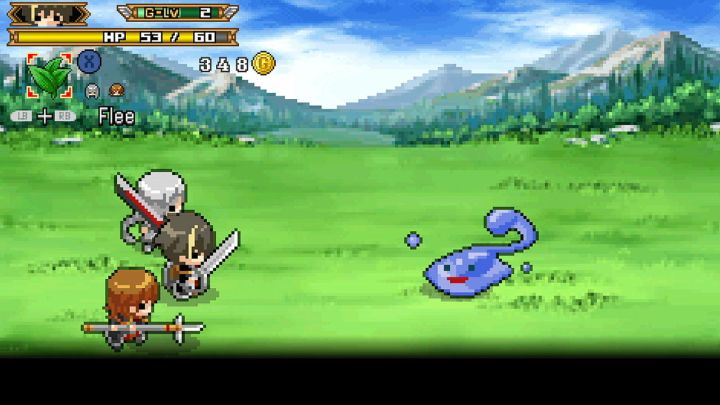 Theres a little under a hundred of these stages before you complete the five chapters that make up the games story, but completionists can try to hunt down hidden coins that grant new battle formations, weapon crafting recipes, or shiny new parts to strap on to your walking castle. I did; I found all 80. You can go back and replay battles of old to just kick arse a little harder, or to complete hidden objectives that unlock vanity titles. Ive done most of these, too. Fact is, Ive sunk a lot of time into Half Minute Hero: The Second Coming much to my surprise; Ive downloaded fanmade maps from the Steam workshop; Ive played against other players in the interesting multiplayer options that work so much better than they have any real right to. Ive dialled up an impressive score in Infinity mode (the games take on horde rush) and Ive gone back to beaten stages to hunt down hidden characters. Theres still more to do, and after the 33 hours or so Ive already spent on the game, Im still invested enough to go back and do them.
4.5/5

If you enjoyed this Half Minute Hero: The Second Coming review, you're encouraged to discuss it with the author and with other members of the site's community. If you don't already have an HonestGamers account, you can sign up for one in a snap. Thank you for reading!

© 1998-2020 HonestGamers
None of the material contained within this site may be reproduced in any conceivable fashion without permission from the author(s) of said material. This site is not sponsored or endorsed by Nintendo, Sega, Sony, Microsoft, or any other such party. Half Minute Hero: The Second Coming is a registered trademark of its copyright holder. This site makes no claim to Half Minute Hero: The Second Coming, its characters, screenshots, artwork, music, or any intellectual property contained within. Opinions expressed on this site do not necessarily represent the opinion of site staff or sponsors. Staff and freelance reviews are typically written based on time spent with a retail review copy or review key for the game that is provided by its publisher.