Okyntt is casually terrifying at points. Sometimes, it deposits little droplets of genuinely eerie instances that the game presents as pedestrian, but will creep you the hell out. Always set against an oppressive backdrop of sheer gloom, distorted faces with blank white pupils will appear at holes in the wall before chatting to you cheerfully. Farm a few items from a nearby scarecrow and its solitary eye will light up and watch you intensely as you harvest straw from the gaping wound you created in its head. Go into the underground lair of the Gruvfrun  a female subterranean troll-like creature  and actually, Ill show you using my genius grasp of basic HTML. Mouse over the screen below and see if you can spot the subtle difference: 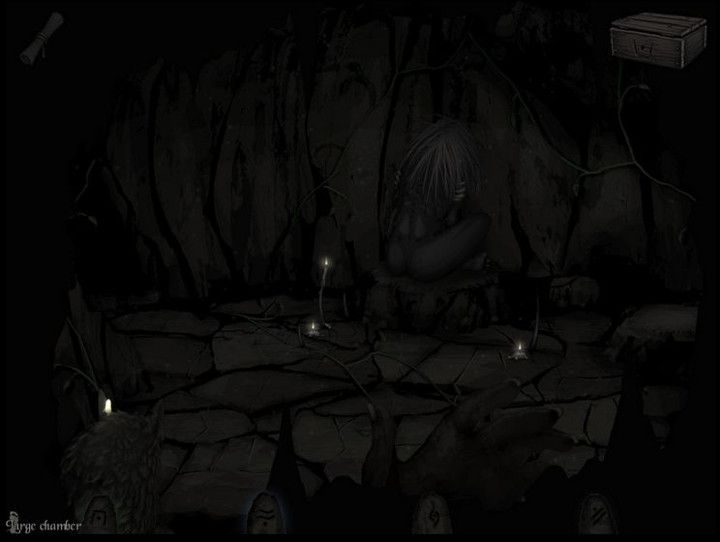 Fact is, Im sure that countless moments like these went unnoticed during my playthrough of Okyntt, sometimes because of the perpetual gloom the games shrouded in occasionally stops being atmospheric and instead just makes stuff annoyingly hard to see, but mainly because the surreal and the fantastic are everywhere. Little orbs of dancing light exist one second, then theyre gone; gnarled tree stumps roll eyes they didnt have an instant ago, and gnash teeth that shouldnt exist. Rock formations bleed  why do they bleed?  and quivering toadstools seem to intensify should you look away for a moment. The entire package feels like a grown up Disney fairy tale suffering from hopeless depression and advancing its broken perspective as the norm. At its best, its intoxicatingly peculiar and refreshing. Okyntts not tainted by cliché jump scares, by pop-culture nuances or by a development team trying too hard; its a casual application of the darker side of Swedish folklore simply allowed to exits on its own merits. Im just not convinced its really a very good adventure game.

Its a difficult thesis to wrap my head around. The atmosphere and the setting of Okyntt is always effortlessly whimsical, but its built around pesky Adventure Game Logic where, to open that door, you need to rub a weasels belly anticlockwise with a spoon youve fashioned from jealousy. And, honestly, I get that; Im a fan  but, as such, its becoming increasingly hard for me to tell the difference between a challenging puzzle and simply poor design. There are moments in Okyntt that make sense - or, at least, that special kind of sense inventory puzzles start to make after a while. A grumpy household deity lives beneath the creaky floorboards of a farmhouse, bitching about how someone stole his hat and how hes hungry. So you make him something to eat and you plop something on his head. The guardian of the farmyard complains how the disrepair of his tools is setting him back  so you find some way to improve his tools. The means are purposefully blurred, but when you have a clear objective in sight, you know youre working towards something specific. Too many times in Okyntt, youre going through the motions in the hope that things will start making sense by the end. 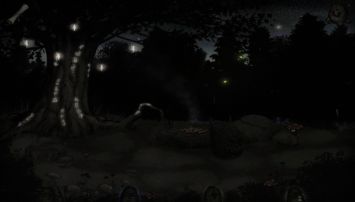 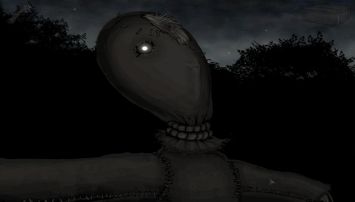 Chapter Three (of Five) contains the lair of the Gruvfrun, who sits with her back to you, weeping and muttering under her breath. Through these groused complaints, you can fashion an idea on how to appease her. However, in this case, solving the mystery of the Gruvfrun is just one step in a multi-staged chronicle into the slow manufacture of a magical McGuffin whose very use will not become even slightly clear until the entire quest line is completed. Its a constant slow dial of little tasks all leading up to one big, blurry solution, but you feel like youre fumbling around in the dark because youve no idea where the entire ordeal is heading. Once you get there, its a case of feeling it fortunate that the dozen or so steps serendipitously produced said McGuffin rather than the smug satisfaction of periodically sleuthing your way out of a bind.

These instances are frustrating, because there are so many aspects of Okyntt that work. The protagonist is a small glowing-eyed creature who unexplainably crawls from beneath a grave one night, then desperately seeks the reason for his existence. Just as inexplicable are the four elemental slabs that grant him subtle powers throughout the environment, which may do anything from activating archaic runes, uncovering ethereal beings or just causing the roof to leak a little, or the stars to momentarily brighten. The surreal story-time theme is strengthened by the entire narration and character voices being performed by the same actor throughout. Be warned, Okyntt is going to charm you. Its a uniquely told and orchestrated tale set in a bizarre world youre going to want to explore. Its just that, sometimes, the game presents puzzles or paths that seem curiously obsessed with killing that interest dead in its tracks and even the allure of discovery isnt always enough to make you want to muddle through.
3/5

If you enjoyed this Okyntt review, you're encouraged to discuss it with the author and with other members of the site's community. If you don't already have an HonestGamers account, you can sign up for one in a snap. Thank you for reading!

© 1998-2020 HonestGamers
None of the material contained within this site may be reproduced in any conceivable fashion without permission from the author(s) of said material. This site is not sponsored or endorsed by Nintendo, Sega, Sony, Microsoft, or any other such party. Okyntt is a registered trademark of its copyright holder. This site makes no claim to Okyntt, its characters, screenshots, artwork, music, or any intellectual property contained within. Opinions expressed on this site do not necessarily represent the opinion of site staff or sponsors. Staff and freelance reviews are typically written based on time spent with a retail review copy or review key for the game that is provided by its publisher.