In The Witch and the Hundred Knight, you assume the role of a witchs pint-sized familiar as it carves a bloody path through hordes of monsters while working to activate magical pillars placed throughout the magical world of Medea. Along the way, youll encounter extensive character customization systems, sprawling dungeons and an unconventional narrative that flits frequently between delightful and horrifying. The end result is a beautiful mess that I have difficulty recommending to any but the most diehard fantasy and action-RPG enthusiasts.

Generally speaking, there are two pieces to The Witch and the Hundred Knight. The first piece is the story, which Ill analyze near the end of the review. The second bit is everything else, which consists of a bunch of stats and menus and random item drops and painstaking exploration. Thats the meat of the game and the plot is the carrot on the stick that theoretically keeps you going when the gameplay starts to drag. 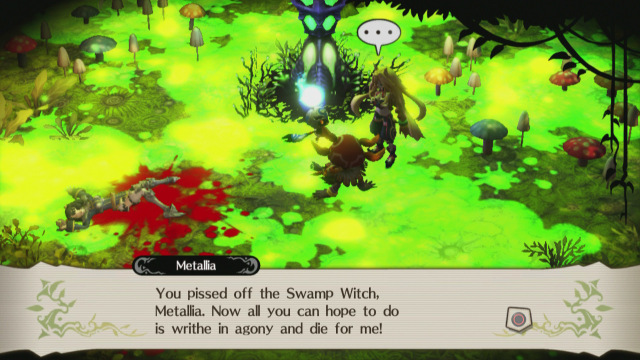 Although you are a magical familiar, you look more like a gremlin in a suit of armor with a ridiculous torch on your head. That light burns brightly at first, but it wont do so indefinitely. As you explore each new region, a map gradually forms. While that helpful resource is being modified on your behalf, your torch burns fuel (known as GigaCals) at an accelerated pace. The same is true if you take damage or especially if you are knocked unconscious. If you become incapacitated and have exhausted your fuel supply, you are automatically whisked back to the swamp that functions as the hub area, and you retain only half of any experience earned while losing all loot. You can use items to delay such an eventuality, but such goodies are uncommon and theyre also prohibitively expensive at first. Thus, youre for the most part forced to either make several exploratory runs each time you encounter a new map, or to consume enemies.

As The Hundred Knight, you possess an appetite for monster flesh and household items. If you weaken your enemies, often you can scarf them down like a struggling steak. Its a terrific way to extend the amount of time you can spend on a map and makes exploration somewhat less tedious, but you are limited by the size of your gradually expanding gullet. Even when you theoretically have space, though, you dont necessarily want to fill up on enemy corpses because that will prevent you from being able to pick up precious loot. Its a constant balancing act.

Speaking of loot, it truly is a major element within the game, with a surprisingly complex set of rules at play in support of that point. Five types of weapon exist: swords, spears, lances, staffs and hammers. Those pieces of armament can in turn possess any one of three attack attributes: strike, blunt and magic. On top of that, each piece of gear also has a number from one through five randomly attached. You can equip up to five weapons at once, and you can string together attacks. If you organize your list properly, this allows you to strike unwitting foes with a flurry of powerful hits using weapons that benefit from stat boosts and their arrangement. If youre not good at tinkering, though, you can use the same--or very similar--weapons with markedly poorer results. The amount of fiddling that is required forces you to pay attention to each discarded sword or lance that litters the battlefield, as you decide when to invest your resources in item improvement and when to cut your losses. 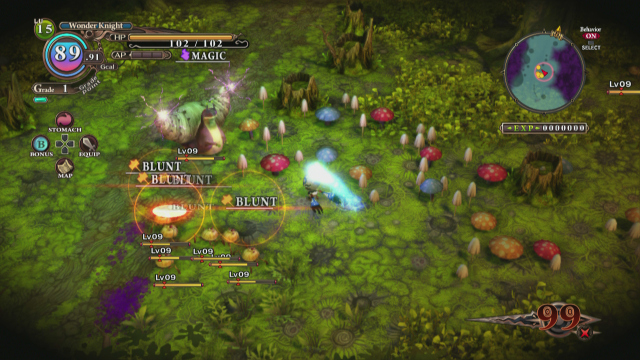 Okay, you might be saying. That doesnt sound like so terribly much to keep straight. But the game isnt actually done piling systems on top of systems. Theres also the facet system, which complicates all of the above. Your character can eventually equip three different facets, which affects how well it can use your chosen gear. Although the character itself doesnt gain levels, available facets do. Different combinations are also better for certain circumstances, so any that you might ignore could come back to bite you later. For instance, you might be about to go up against a powerful magical beast. In that case, youll want to equip Marginal Gaze, which improves your natural defense against magic attacks. Any attacks you deal with staffs also benefit, while some other equipment doesnt operate as promised because it takes a performance hit. In another case, you might face a speedy boss who is best dispatched with a sword. Because situations change often, its useful to keep a variety of weapon types around, and to be ready to switch them around as you find better options.

Spend enough time with the game and all of the above details--plus other systems I dont have room to talk about here--start to make sense and even begin to feel natural and perhaps intuitive. Unfortunately, the resulting focus on stats often distracts a person from admiring the games beautiful moments, which feels a bit to me like visiting the Grand Canyon and passing the entire time solving Sudoku puzzles. I spent hours wandering through some of the early forests before I ever stopped and listened to the beautiful piano music (from the talented composer responsible for so many memorable Disgaea tunes), or allowed myself to appreciate the way the light shone down through the foliage and lit the tips of blades of grass blowing in a gentle breeze. Theres a storybook beauty to everything, with a glistening layer of pixie dust sprinkled over all of it.

I suppose that leaves me to tackle the games tricky plot. Much of the games appeal rests on its ability to surprise the player, and yet the plot is structured in such a way that even a quick summary runs the risk of giving away details that are best left unspoiled. What I will say is that the narrative is frontloaded with a lot of sensational twists on classic fairytale witchcraft, mostly in the form of dialogue and scenarios that unquestionably strain any credibility the T rating might have once possessed. This is a game where rape is strongly implied or reported on no fewer than three distinct and memorable occasions (without the word actually being used), where profanity is humorously bleeped out just carefully enough that you can still hear most of the naughty parts, and where the lead character liberally refers to rival witches as whores. Im not usually one to be bothered by such things, but The Witch and the Hundred Knight made me squirm. 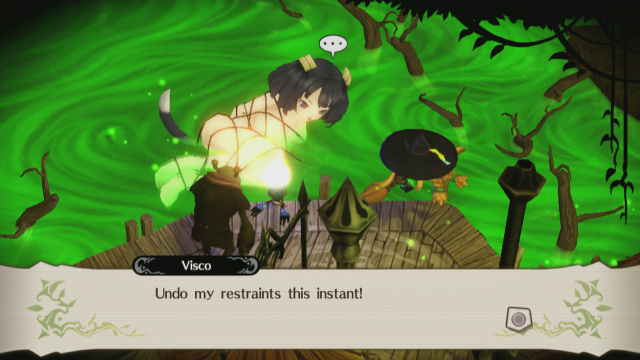 Coarse dialogue and events eventually give way to some spectacular world building that I quite liked, but there are too many caveats to mention and my hands are tied once more because Id have to dive down the rabbit hole marked Spoilers to even begin to give a proper accounting of everything the writers did right that might counteract their more obvious stumbles. Numerous scenes and dialogue have little apparent significance throughout the first two thirds or so of the game, but then the writers pull most of it together and create something fascinating, with lore and a real history. Its just a shame that I cant really talk about any of it, and its almost tragic that--unless I miss my guess--most people who play the game wont even see the bulk of the good stuff.

The Witch and the Hundred Knight is a long and sometimes very involving game, one led by a memorably imperfect heroine who watches and comments from the sidelines while you do most of the tedious work that might allow her to find her place within the fascinating fantasy world she populates. If you take the time to experience everything on offer, as I did, youll wind up with a number that looks a lot like 80 hours staring back at you the next time you go to load your save file. Then youll be left to wonder just how many of those hours you genuinely enjoyed. For me, the answer is somewhere in the vicinity of only about half of them. Still, it kept me going until the very end. That has to count for something, right?
2.5/5

If you enjoyed this The Witch and the Hundred Knight review, you're encouraged to discuss it with the author and with other members of the site's community. If you don't already have an HonestGamers account, you can sign up for one in a snap. Thank you for reading!

© 1998-2020 HonestGamers
None of the material contained within this site may be reproduced in any conceivable fashion without permission from the author(s) of said material. This site is not sponsored or endorsed by Nintendo, Sega, Sony, Microsoft, or any other such party. The Witch and the Hundred Knight is a registered trademark of its copyright holder. This site makes no claim to The Witch and the Hundred Knight, its characters, screenshots, artwork, music, or any intellectual property contained within. Opinions expressed on this site do not necessarily represent the opinion of site staff or sponsors. Staff and freelance reviews are typically written based on time spent with a retail review copy or review key for the game that is provided by its publisher.