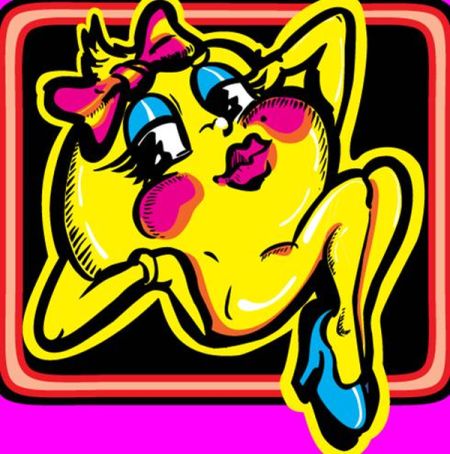 Whenever I find myself in the presence of an arcade cabinet collection*, there's usually one game I gravitate to above all...

Pipi & Bibi's? No, I wait until the wife isn't around for that one, usually after she grows so irritated that she decides to wait in the car.

Before I lay hands on any piece of pixelated perversion, I usually like to start an arcade session with a certain simple, inexpensive score attacker from times forgotten: Ms. Pac-Man. To this day, I still feel a jolt of excitement when I hear the familiar jingle of a quarter slipping into its guts, especially when accompanied by Ms. Pac-Man's charming introductory ditty. There's also something about the game's neon visuals and brilliant colors that seems to serve as a time machine, sending you back to the '80s when the game was as relevant as its color scheme. Indeed, Ms. Pac-Man is a nostalgic treat, though I personally dig it for other reasons than just its audio and visual qualities.

For instance, I enjoy the game's addictive, fast-paced mechanics. Sure, its levels consist of little more than simple mazes brimming with edible dots, but the simplicity of the game's stage designs is also part of what makes it enjoyable. For if the game were more convoluted, there'd be a much higher learning curve, something I prefer not to see in a score-based title. Rather, playing Ms. Pac-Man is intuitive. You simply navigate a network of corners and hallways whilst avoiding the accursed touch of four deadly phantoms. So, to avoid a "Paranormal Activity"-ish fate, one must be aware of his surroundings. It's prudent to be cognizant of your adversaries' motions and whereabouts, as well any hazards that may be in your vicinity and the locations of any succulent dots.

Like its predecessor, the miss possesses a form of reprisal against the ghosts. She can also munch power pellets that allow her to devour the spectral antagonists for a limited time. As you advance through levels, though, the duration of the pellets' effects diminishes. Eventually, they become little more than standard dots with special sprites.

Try as you might, though, Ms. Pac-Man finds a few ways to confound your plans of survival. Every so often, maze patterns shift, forcing you to memorize new routes. The developers also tossed in some special goodies that boost your score, but also put you in harm's way. For instance, bouncing pieces of food manifest a couple of times per stage. When one appears, you must make a decision: should I avoid it and remain relatively safe or split my attention and try to pursue it, knowing that I may lose track of my opponents?

The answer lies in how desperate you are to put your initials on the high score list. That may not matter as much nowadays, but scoring had a purpose once upon a time. Having a high score meant you were one BMF, and rather elevated in the arcade pecking order. A high enough score sometimes meant you could expect a patch in the mail from the game's publisher. Then you could iron it to a blank trucker cap and absolutely confirm your perpetual virginity.

Of course, reaching such a high score isn't a simple matter, even if Ms. Pac-Man is as uncomplicated as any arcade title can get. The problem is that there's an ever-present temptation to continually score points. I've noticed over the years that there seems to be a tendency among players to binge on dots, even when doing so is ill-advised. The key to succeeding in Ms. Pac-Man, though, is to preserve yourself above all, and to only nosh on dots when the opportunity arises to do so safely. Otherwise, you'll suffer a fate worse than Ray Stantz...

Taking risks is half of the fun, though. Eventually, it can grow tiresome trying to survive, and you'll find yourself wanting to skip gleefully into the fray and munch like mad. I'm sure you'll end up like me, swearing for your lack of judgment as you lose a life, but such is the arcade scene. These games were not meant to be hand-holding narratives that give you an unlimited number of chances to succeed. They were ruthless killers who dined on your loose change, rage, and tears. Your only alternative is to step up your game and play better than the computer-controlled specters. For me, it wasn't merely the act of succeeding that kept me playing arcade games like Ms. Pac-Man, but noticing signs of my improvement. It reminded me that even though I wasn't a skilled enough player to secure a girl-repelling patch, I was actually capable of improving as a gamer. Thanks for the lessons, Ms. Pac-Man. Enjoy the quarters.


*There are few genuine arcades left in my town, and most of them are pitiful in comparison to the ones that existed in the '80s. The best you can hope for nowadays is a collection of arcade games or a "game room."
4.5/5

If you enjoyed this Ms. Pac-Man review, you're encouraged to discuss it with the author and with other members of the site's community. If you don't already have an HonestGamers account, you can sign up for one in a snap. Thank you for reading!

© 1998-2020 HonestGamers
None of the material contained within this site may be reproduced in any conceivable fashion without permission from the author(s) of said material. This site is not sponsored or endorsed by Nintendo, Sega, Sony, Microsoft, or any other such party. Ms. Pac-Man is a registered trademark of its copyright holder. This site makes no claim to Ms. Pac-Man, its characters, screenshots, artwork, music, or any intellectual property contained within. Opinions expressed on this site do not necessarily represent the opinion of site staff or sponsors. Staff and freelance reviews are typically written based on time spent with a retail review copy or review key for the game that is provided by its publisher.