PREVIOUSLY, ON THE WALKING DEAD...

Season 2 wasnt big on easing players in. Without her supporting cast, 11 year-old Clementine was left on her own, in the middle of a woods crawling with undead. She had to do things to survive no little girl should have to do -- it was purposefully difficult to watch, but transferred her from being a group of survivors moral compass to prime protagonist. In Season 1, she was chaperoned, protected, but the game made it your job to raise her for the situation Season 2 maliciously drops her in. You had to slowly chip away at her innocence to instil a level-headed coldness you can now, heartbreakingly, see behind her eyes. In Season 2 she has to stop being a child and start being a survivor.

The first episode All That Remains, drove that point home hard; it showed the lessons she had learned and her willingness to survive against the odds. Theres nothing so graphically gut-wrenching to be found in A House Divided as in her previous trials, so Telltale gets right to work on keeping you as anxious as it can instead. The last choice made in the previous episode will see you trapped with one of two people, neither of which offering an ideal partner. Ones probably infected, and has to make a tough call on what hes going to do about that; the others a tumbling collection of grief and dire resignation  both require some tough calls to be made on your behalf. Its a apprehensive moment, made all the tenser by strong writing designed to install sympathy with the characters. Its dangerous to get attached considering Telltales habit of killing everyone youve ever even slightly cared about off with sadistic glee.

A House Divided is much less macabre but much more traumatic. In finding a new group of survivors, Clementine has joined a story already in progress that the game only hints at, showing you brief glimpses of the whole picture one second, then messing with your expectations of it. Clem will overcome her first hurdle, and be left with fellow survivor, Sarah, alone in a wood cabin while the adults leave to search for answers. Sarah provides a perfect comparative model; shes slightly older than Clem, but much more naïve, purposefully kept ignorant of the worst horrors of the new world by her protective father. When an unwelcome intruder enters the cabin, Clem has to step up to front him out while Sarah panics and hides.

In perhaps the strongest stand-alone scene the series has yet to produce, the intruder and Clementine both track through the house, begrudgingly telling each other little snippets of truth wrapped in lies, trying to trick the other into revealing more than they want to. Clementine is forced to try and protect her new found group, while the intruder whittles away at her small reservoir of faith in them with casual comments. Her defence is forced to waver under her new found uncertainty, and its in times like this The Walking Dead subtly reminds you that, for all her courage and sheer will to survive, Clementine is still just an eleven year old girl. 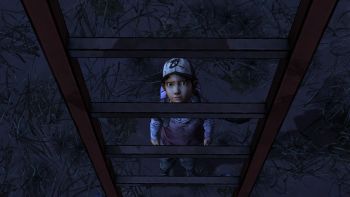 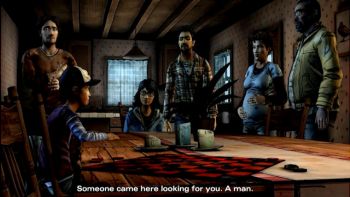 They show it in her struggle to free a claw hammer from the skull of a dead walker, or in her guarded joy in discovering something as childishly pedestrian as Christmas decorations, and they use it against you. A House Divided supplies moments of revised innocence simply to stomp on your emotions anew, and its very good at it. In moments of panic, Clem is trusted enough to work out how to use machinery above the understanding of the adults. When crisis hits, the seemingly weaker members of the group turn to her for tough calls. Despite her youth, the way she has carried herself in Season 2 has already established her as a survivor, so Episode 2 instead fills itself with loaded social questions. When two cliques form, she needs to lean towards one, involuntarily alienating the other. Sarahs naivety can be addressed in order to give her better chances at staying alive at the cost of her fathers ire. Who does she place more importance on in the group when calls she makes put lives on the line, or does she simply look out for herself first?

A House Divided skimps on the explorable stages, overly easy inventory puzzles and optional conversations with other members of the cast that the series has strongly employed previously. But does so to pack itself absolutely bursting full of choices that have malevolent potential to come back to bite you in the arse. Small throwaway decisions that in differing circumstances would seem casual absolutely drip with foreboding premonition. Youre only given a few seconds to make a choice and whatever you choose, someone will remember it A chain of events will be started behind the scenes and when it inevitably all goes wrong you will know that its all your fault. 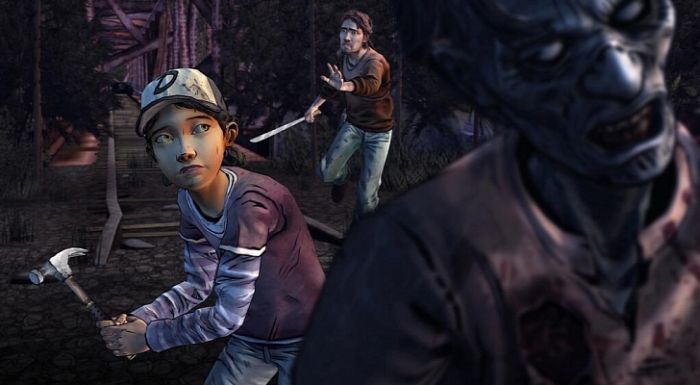 Sometimes I wonder why people willingly subject themselves to an experience custom built to make them feel so bloody miserable. Then I replay the last chapter in the hopes of trying to unearth slightly happier conclusions, desperately trying not to remind myself that Im destined to fail.

If you enjoyed this The Walking Dead: Season 2.2 - A House Divided review, you're encouraged to discuss it with the author and with other members of the site's community. If you don't already have an HonestGamers account, you can sign up for one in a snap. Thank you for reading!

© 1998-2021 HonestGamers
None of the material contained within this site may be reproduced in any conceivable fashion without permission from the author(s) of said material. This site is not sponsored or endorsed by Nintendo, Sega, Sony, Microsoft, or any other such party. The Walking Dead: Season 2.2 - A House Divided is a registered trademark of its copyright holder. This site makes no claim to The Walking Dead: Season 2.2 - A House Divided, its characters, screenshots, artwork, music, or any intellectual property contained within. Opinions expressed on this site do not necessarily represent the opinion of site staff or sponsors. Staff and freelance reviews are typically written based on time spent with a retail review copy or review key for the game that is provided by its publisher.