Remember when a person didnt need to be in the mood for a shooter to properly enjoy Call of Duty? I recall the year Call of Duty 4: Modern Warfare arrived on the Xbox 360 and made me fall briefly in love with the genre, even though the last FPS title Id truly appreciated before that was GoldenEye on the Nintendo 64. Modern Warfares combination of spectacle and thoughtful play mechanics made it a genuine masterpiece that remains unsurpassed even now.

Call of Duty: Ghosts was unlikely to ever knock that older title from its lofty perch, but I figured it at least had a chance. I started playing with an open mind, ready to let the game astonish me with intricate design, a beautiful story, breathtaking visuals and the numerous other attributes that earned the series its loyal following. I was, you might say, in the mood

Unfortunately, youll need more than optimism to enjoy Call of Duty: Ghosts. The narrator begins with an absurd story about a team of elite American soldiers facing overwhelming odds. Many of their number died in the ensuing battle, but the final handful of surviving warriors made the best of a bad situation. They hid under the corpses of their fallen comrades, letting the blood wash over them and the desert sand stick to their skin. When their adversaries returned, a fresh slaughter followed. This time, Americas soldiers won.

When you start playing, you and your brother are listening to your father finish telling his grisly, fantastic tale. The three of you have been relaxing in a forest, only a short walk from the mansion you call home. You rise to your feet and start your gradual climb along the wooded trail that leads back to your not-so-humble abode. Thats when a slight tremor shakes the earth. Another soon follows, and then one more. You crest the summit and step onto the nearby road, at which point you realize that the rumbling you felt was not the effect of an earthquake, as you imagined. Half of the nearby suburb is up in flames. Its an incredible scene, but theres a reason for it. Fifteen minutes earlier, in space, a team of--

You know what? Forget the story. By now, if youve played through many Call of Duty games at all these past few years, you could probably write most of this one yourself. A small group of soldiers trots around the globe like James Bond in camouflage. Highlights include a handful of exotic locations, a few that are much closer to home, and every new destination is populated by a bunch of hostiles with guns who speak a different language (Spanish, in this case) and want you dead. 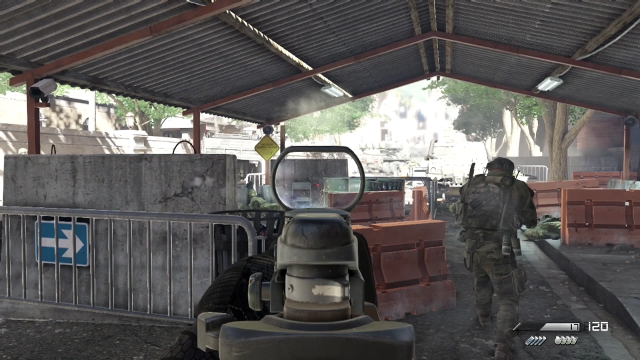 Call of Duty: Ghosts tries to get by on spectacle alone. The most substantial thing you know about any of the heroes other than your father, brother, and the dog Riley (more on him in a moment) is how they each spell their names if those even are their real names. The bulk of the dialogue consists of men barking out orders, with perhaps 30 seconds of heartfelt conversation doled out over the course of the seven or so hours it will take novice players to reach the end of the campaign. Im not asking for enchanting narrative, but it shouldnt leave me with the sense that its sole purpose is to keep me occupied while the next impressive set piece loads from the game disc. Modern Warfare managed to strike the right balance way back in 2007, after all, and it didnt even need a script from Hollywood writer Stephen Gaghan to do it.

Since I mentioned the set pieces just now, I should emphasize a point: they are spectacular. The series has never slacked in that regard, but I cant recall the last Call of Duty campaign that produced so many gorgeous environments and then let me blow them to bits. My wife even stopped to watch me play, though I think what impressed her most was the way the soldiers faces looked so real when they talked. She was drawn to the games more personal side, so its just as well she left the room before everything went up in flames, as seems to happen once or twice per stage.

I hesitate to describe any one of those set pieces in painstaking detail, because that would only spoil a portion of the one thing the game does most successfully. Youre better off witnessing it all for yourself, especially some of the events that occur later in the game. Probably the only other aspect of the campaign I can safely tell you about is Riley, the aforementioned dog who you might recall seeing promoted heavily in video made available ahead of the games release. Hes a German shepherd, and he does things like bark when there might be enemies nearby, or tear out their throats if they get close enough. Hes fun to have along. Enemy soldiers typically ignore him unless the particular mission objectives specifically include a directive to keep him safe, but hes able to bring down a chopper all by himself. That ties him with Jaws, the way I see it.

So anyway, thats Call of Duty: Ghosts in a nutshell. Or at least, thats the single-player campaign. As usual, theres more to the game than just the parts that required a script. The new attraction this time around is Extinction mode, which you can play online or even locally with a friend. Its a survival mode, basically. You try to survive as long as you can while destroying extra-terrestrial hives and blasting the critters that attempt to make said chore difficult, and you can rank up and choose upgrades if you stay alive long enough. Its different enough from the zombie attraction in Black Ops II that it is somewhat fresh, but not to a point that makes it feel--if youll pardon the pun--totally alien.

Team deathmatch also makes an inevitable appearance, and I saved it for last because I can sometimes spend hours gunning down strangers online without even being aware how much time has passed. I expected to enjoy a similar experience now, but instead I was miserable. My first match started partway through, and my team was already trailing. My arrival didnt help matters. Id spawn, start along one of the wooded trails, and someone would almost immediately gun me down from an elevated window or from behind a parked car or the top of a grassy knoll or--you get the idea. There were just too many potential hiding places, and the opposing team wasnt afraid to camp at each of them. Then on the next map I tried, which had more snow and less foliage, everything went nearly the same way. Sometimes I would spawn and my character would literally take only a step or two before falling to the ground, dead from a headshot. Ive never encountered anything quite so exasperating in an online match.

I definitely miss the years when I didnt have to be in the mood to enjoy a Call of Duty game. If Call of Duty: Ghosts is an indication of what we can expect from the franchise in any installments to follow, I probably need to give up on the notion that the old feeling will ever return. I did manage to enjoy myself quite a bit as I worked my way through the single-player campaign, because underwhelming Call of Duty is still pretty cool, but there are numerous other titles in the series Id recommend trying ahead of this one when youre in the mood for bullets and mayhem.
3/5

If you enjoyed this Call of Duty: Ghosts review, you're encouraged to discuss it with the author and with other members of the site's community. If you don't already have an HonestGamers account, you can sign up for one in a snap. Thank you for reading!

© 1998-2020 HonestGamers
None of the material contained within this site may be reproduced in any conceivable fashion without permission from the author(s) of said material. This site is not sponsored or endorsed by Nintendo, Sega, Sony, Microsoft, or any other such party. Call of Duty: Ghosts is a registered trademark of its copyright holder. This site makes no claim to Call of Duty: Ghosts, its characters, screenshots, artwork, music, or any intellectual property contained within. Opinions expressed on this site do not necessarily represent the opinion of site staff or sponsors. Staff and freelance reviews are typically written based on time spent with a retail review copy or review key for the game that is provided by its publisher.