Created by pioneering European development studio System 3 and originally released on the Super Nintendo by Ocean in 1994 after plans for an Amiga edition were shelved, Putty Squad is a platformer with battle scars. Players are placed in charge of a blob of blue putty that must save its crimson-hued brethren by hopping, sliding and floating through a variety of bizarre and demanding action stages. Its zany old school madness that would quite probably be worth a purchase by those who are looking for a throwback to the games of yore, if only it werent so tiresome to play.

In the 20 years following Putty Squads original release, a lot has changed. Graphics have improved dramatically, but more importantly, players have grown accustomed to precision controls and intuitive interfaces. Having never played the original version of the game, I cant say it ever possessed those last two qualities, but one thing is certain: it lacks them now. 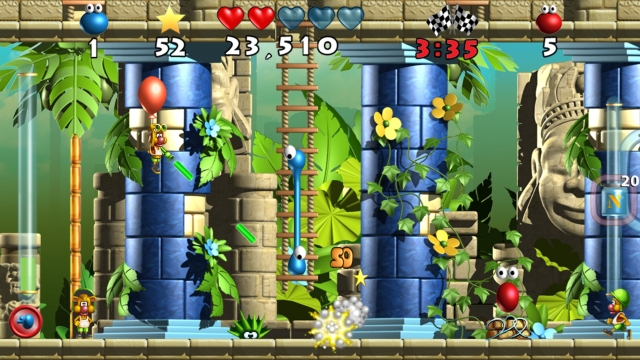 As you might expect, you control Putty with the analog stick or d-pad. He jumps when you press the X button. Thats simple enough, but you also must keep track of other abilities. If you press the Triangle button, Putty will partially inflate himself, and you can tap it a second and third time to make him grow even larger and rise more quickly. Then you can press Down to make the mass of ooze exhale and quickly drop. This feels like it all could have been handled in a more straight-forward way, as seen in the Kirby titles on the Game Boy and NES.

The shoulder buttons are relegated to action attacks. Pressing L1 prompts an attack to the left, while R1 makes Putty lash out to the right. Too often, Ill press the R1 button to attack an enemy that is approaching from the direction Putty is facing, and he will instead flail ineffectively at the air behind him. Theres never really a point where being able to attack in either direction with two separate buttons adds anything positive to the experience, and I cant help but wish the developers had kept things simple. Perhaps they were too busy finding other ways to confound me. If thats the case, they succeeded when they required the player to press Square to jump down, instead of the X button. That brings to three the total number of buttons that make Putty jump in slightly different ways.

I apologize for spending two whole paragraphs talking about something boring like the control scheme, but it negatively colors the whole experience. Most stages in Putty Squad are absolutely packed with enemies, projectiles and hazards. Moments of hesitation as you try to remember which attack button to useor which jump buttonoften will result in you taking unnecessary damage, which sucks because you cant typically lose more than one life without being sent to an obnoxious Game Over screen before you are allowed to try again. Additionally, your stock of lives and even your health meters condition carry from one area to another. If you only just barely clear one stage, youll start the next one in bad shape. There is a finite supply of food to gather that replenishes your hearts, but you cant obtain extra lives. 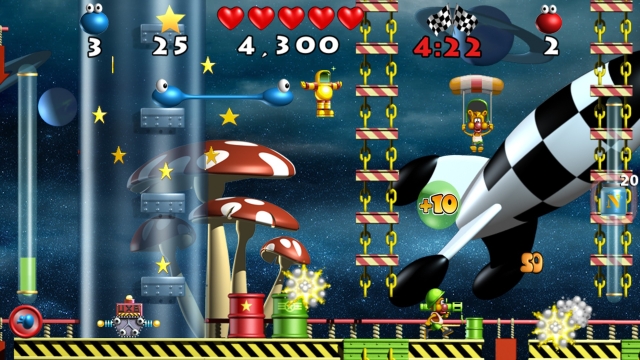 So, how are the levels structured? A typical stage begins with a generous timer counting down, and you must spend the allotted time locating the red blobs you came to rescue. Some of them are situated in plain sight, and you can rush to their side. Others are hunkered down in miniature bunkers, which inflict damage if you get too close. You must destroy them with nitro grenades and rockets that you gather either by picking up items or by absorbing certain enemies. You rescue your buddies in the same manner, actually, which presents another issue: absorbing is not quite as precise as it ought to be. You may get close to the object of your desire and then stop moving, believing that youll consume it in a second or so. However, many enemies dart about pretty swiftly, meaning it may take several attempts before you are able to line yourself up properly. Meanwhile, some other villain could be tossing explosives at you andonce againyoure taking damage that doesnt seem quite fair.

In a number of late-game scenarios, you will need to snag a friend from the path of a rotating bar of flame or from some other treacherous hazard, and theres only a half-seconds difference between a perfect rescue and a failed attempt that sends you flying backward in defeat. Some enemies are also capable of killing you instantly, or theyre tricky enough to eliminate that youll take a few hits just ridding yourself of them. A number of foesparticularly robotsare also impervious to your standard attacks, and most regenerate not long after you defeat them.

All of the above combines to produce a frequently frustrating experience, but there is some good news: if you find that everything is a bit too demanding by default, you can drop the difficulty setting from Normal to Easy. You can also adjust it upward to Hard if youre feeling particularly masochistic, so theres an option for just about every mindset. Your performance is also rated in each stage, with stars being awarded if you clear a zone without losing a life, or if you score enough points and such. You can also collect stickers to fill a virtual scrapbook with cheesy art. Hidden doors are also discoverable. They lead to bonus areas that can improve your score, if youre worried about placing on leaderboards. 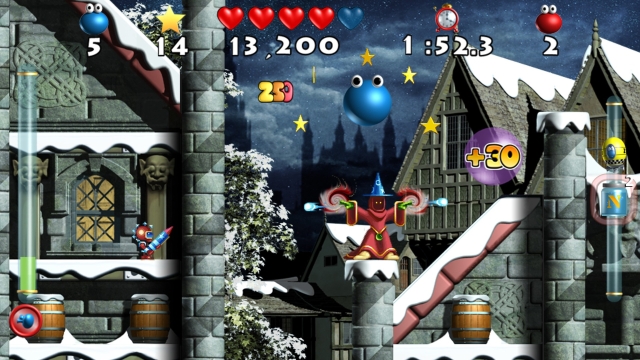 When you tire of the Marathon mode, which is the developers name for the standard single-player campaign, you can also try Challenges that correspond to each of the nine main worlds you may have accessed. These present special restrictions, such as a nasty time limit or the provision that you cant grab healing items. They are of course optional, and I didnt spend much time with them because I wasnt having enough fun with the game to justify the extra investment.

Putty Squad isnt a complete failure, though, or even an especially bad game. If nothing else, everything does look quite nice on an HD set. The worlds youll explore are sharply drawn and vividly colored in a way that is both attractive and efficient. The sound is also crisp and clear. Recent titles such as Rayman Legends and some of Nintendos retro-themed Mario, Kirby and Donkey Kong stuff is arguably far superior, but this is still a solid effort from a smaller development studio.

Unfortunately, a fresh coat of paint doesnt do enough to make Putty Squad a game I am really comfortable recommending to anyone. It offers a reasonably lengthy campaign with plenty of challenges and content along the way and it looks nice on even a large HD television. However, the core design feels dated and awkward. Its outclassed not only by todays efforts in the genre, but by numerous titles that came before it. Unless you have a particular attachment to the original SNES release, youd do well to steer clear of its competent but uninspired remake.

If you enjoyed this Putty Squad review, you're encouraged to discuss it with the author and with other members of the site's community. If you don't already have an HonestGamers account, you can sign up for one in a snap. Thank you for reading!

© 1998 - 2022 HonestGamers
None of the material contained within this site may be reproduced in any conceivable fashion without permission from the author(s) of said material. This site is not sponsored or endorsed by Nintendo, Sega, Sony, Microsoft, or any other such party. Putty Squad is a registered trademark of its copyright holder. This site makes no claim to Putty Squad, its characters, screenshots, artwork, music, or any intellectual property contained within. Opinions expressed on this site do not necessarily represent the opinion of site staff or sponsors. Staff and freelance reviews are typically written based on time spent with a retail review copy or review key for the game that is provided by its publisher.