Horizon is a bit of a contradiction; it yearns to be different but, at the same time, desperately wants to remind you of the 4X giants of yesteryear. In a lot of ways, its the closest thing weve had to the beloved Master of Orion 2 since, well, Master of Orion 2. It shares a lot of that games base ideas; for the most part, youre a fledgling space-faring race starting life inside a single system just starting to explore a much wider array. It just so happens several species exist at the exact same technological apex, prompting a furious race to swallow up virgin planets and boast the strongest empire. Well, at least if you want to play it that way, the options available. Horizon is just as happy to throw in a few extra twists.

Should you prefer, you can instead drop into a story mode where each race already has individual tiers of advancement and pre-existing borders. Humanity has yet to expand outside Sol, for instance, and have limited nuclear powered engines that will take several years to limp into the next exploreable system. Their technology is sparse, their colonies non-existent, and only have the unpleasant prospects of Mars within their reach to branch out towards. They would probably exist within their little bubble of ignorance forever should they not have found an alien craft adrift about the orbit of Pluto thats only one really drawn out tutorial away from claiming,

One of Horizons big strengths is how it doesnt just present a blank canvas filled with star systems, but tries to tie everything together with an intertwining plot. The craft offers first contact with an alien race almost brought to extinction, offering new insights into technology that will finally let you explore the greater galaxy. It also offers cryptic warnings of an ancient light-based alien species on the hunt for a compatible organic companion race, and a nasty habit of declaring genocide on those who dont fit their specifications. Subtle seeds are sown as to how you can be a part of either avoiding them of help destroy them. I didnt feel especially ennobled. I ignored that mess to instead concentrate on spreading like bipedal space-faring cockroaches.

I could build colony ships, but until I had a floating orbital station, I couldnt restock them with colonisation pods, which seemed kind of annoying. My barely developed industrial ranking at that time told me it would take over 100 years (read: turns) to get one constructed around Earth. So I built a handful of scout ships, a transporter to board the alien craft lurking around Pluto and set to work slowly nibbling at the borders of my understanding. Mars become my first colonised planet, and a scout ship found an Earth-like planet nearby to limp towards and claim. Soon, I found my first alien race, a friendly bunch of hovering cow-like creatures with giant anime eyes. We become fast chums. 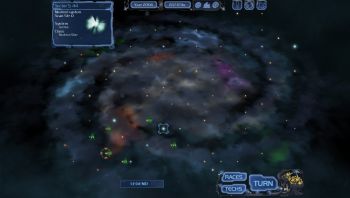 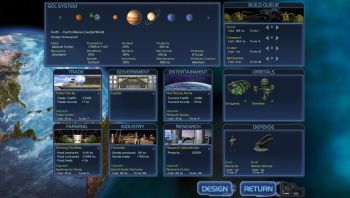 Horizons diplomacy options are as brilliant as they are outright confusing. They dont offer the simple option to trade specific technologies, but can go in as deep as asking allied races to impose trade embargo on hostiles, request any number of treaties (from information sharing to free trade) or offering gifts. You can demand races leave a particular star system, or reply to similar demands made against your colonies all the way down to requesting non-aggression pacts to declaring full out war. In the most appreciated gesture made since 4X began, failed negations dont result in an automatic relationship penalty. When a species of space-hopping merchant hobbits asked for trade routes between our worlds, and I countered with a tech request, they simply refused and moved on without being outraged.

Though relationships arent always made clear. Several times, races have randomly declared war without warning, and then quietly dropped their campaign with even less warning. After angry fishmen made me their targets, I rallied my allies and dug in for war. I damaged trade routes, planed with allies to besiege their systems and bartered for nearby alien shipyards to help repair and restock any damaged fleets I might suffer. A few turns later, I noticed my relations with said race had been downgraded from At war to Hostile. A few turns after that, despite razing two of my outer colony planets, they were asking for a non-aggression pact, and seemed mightily surprised when I turned them down.

I, of course, hunted them to extinction. Stupid, uppity fishmen.

Their genocide was a lot more time consuming and painful than it had to be, because Horizons grandest vision is sadly their biggest let down. On paper, its clever scheme to offer you direct control of each individual ship on a turn-based basis is somewhat intoxicating. Theres a number of clever options that make this seem like a micromanagers wet dream; ships shields take very specific circumference damage, meaning that a craft with weakened starboard shields need only roll port-facing at the end of each turn to keep themselves alive a little longer. However, this has to be plotted with things like firing arcs in mind depending on where you decide to house your crafts weaponry. Side or front mounted cannons make deciding on where to park suddenly vitally important even before you factor in things like range, and specially outfitted ships can even launch boarding parties to gut enemies from within. It sounds great. It isnt.

The problem here is that some battles can span entire systems, featuring dozens upon dozens of ships that all need to be slotted into place manually, and then each individually given orders to fire, retreat or so on before ending their turn. Small skirmishes are more than controllable under such circumstances, and often laudable, but as the size of your wars balloon, the system becomes unwieldy and cumbersome. You can set these battles to auto where your fleets are then controlled by an Ai seemingly raised under power lines and force-fed a solid diet of paint chips, but these fights still take forever as each side literally lines up and slowly whittles away at each other. My solution, then, was to use the skip battle option which decides the victory on the spot, but this could randomly lead to vastly superior forces unexplainably loosing. Only the never-fading embers of the hatred I had lovingly nurtured towards the smelly fishmen race kept me returning again and again to the disappointing fray. 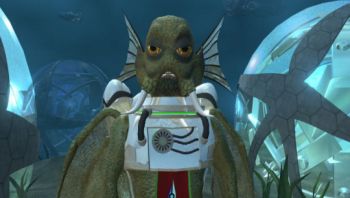 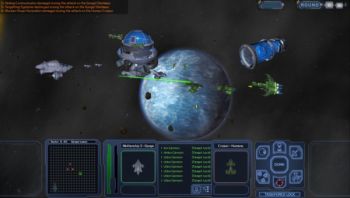 Problem is, once you start noticing that Horizon asks you to invest a lot of time into things that achieve very little, you cant really stop. The start of the game makes a big deal about how planets you colonise can be funnelled into certain specialities that work symbiotically with the building restrictions each outpost offers. It says youd be best off creating stand-alone Industrial or Research worlds, or casually mentions when new realms have geographic advantages, such as fertile soil or stunning vistas, to give them a boost over others. But theres no need to priories a number of specific worlds over the same number of balanced ones. You cant, say, twin a farm ecosphere to provide food for a world solely focused on spitting out research. I made a vacation world filled with weird alien architecture and exquisite views, but it didnt seem to make much more than some of the standard trade routes Id dropped on random planets out of obligation. Bottom line was, after getting my little empire off the ground, I still found myself swimming in more money than I could probably ever use.

I remember the awful moment in Armada 2526 when my reckless spending finally eclipsed my sporadic earnings and each turn drove me further and further into an insurmountable pit of debt. At one point in Horizon I actively tried to replicate this unhealthy feat. I ordered floating orbital stations and shipyards for everyone; planetside missile defences and army barracks suddenly became available to all. Ships I didnt want and would never use were constructed by the hundred. All I ended up with was a huge army, and no fishmen left to use it on.

Id be amiss to write Horizon off for all this, though, because it carries on its unending tradition of getting as many things perfectly right as it does dramatically dropping the ball. The requisite research tree, well, isnt actually a requisite research tree. Fact is, delving into different paths of research wont guarantee a damn thing, and breakthrough discoveries into new avenues are either made on the fly, inspired by alien tech or discovered on unexplored planets. Before implementing any new techs you might discover, they have to go through a level 0 prototype stage where scientists prod and poke at them until theyre ready to roll them out.

Horizon has issues, but they're mainly issues born of ambition, and its brave charge to retread hallowed ground with shiny new tricks is to be lauded. Does this make the lack of balance and droning, endless combat excusable? Eh, probably not. But it does bring new ideas to a genre that's crying out for them, and isn't afraid to take what it needs from past while still trying to do things its own way. In my time, I destroyed a soggy race, bought freedoms to a galaxy that barely knew it was enslaved and named the prettiest, most productive planet in the galaxy after myself. EmP Prime, it's called. It's my legacy.
3.5/5

If you enjoyed this Horizon review, you're encouraged to discuss it with the author and with other members of the site's community. If you don't already have an HonestGamers account, you can sign up for one in a snap. Thank you for reading!

© 1998-2020 HonestGamers
None of the material contained within this site may be reproduced in any conceivable fashion without permission from the author(s) of said material. This site is not sponsored or endorsed by Nintendo, Sega, Sony, Microsoft, or any other such party. Horizon is a registered trademark of its copyright holder. This site makes no claim to Horizon, its characters, screenshots, artwork, music, or any intellectual property contained within. Opinions expressed on this site do not necessarily represent the opinion of site staff or sponsors. Staff and freelance reviews are typically written based on time spent with a retail review copy or review key for the game that is provided by its publisher.