Weapon Shop de Omasse is a quirky rhythm game, one of four titles originally included in the Guild 01 compilation in Japan. The developers at Level-5 were reportedly hesitant to release the game in North America due to the amount of translation required and the diminutive audience they believed would exist here for a distinctly Japanese experience, but they finally relented just recently.

In the game, you assume the role of Yuhan, a youthful apprentice laboring at a weapon shop run by a grizzled old blacksmith. You have convinced your mentor to train you in the art of blacksmithing, and you hope to sustain the venture with a unique business model: weapon rentals. Instead of selling a bunch of gear to travelers and adventurers you wont ever see again, you loan it out to the locals and collect payment only when those brave and honest souls return from successful quests. This is a good time to build a reputation as a purveyor of fine tools of destruction, too, because the Evil Lord is rumored to be on the verge of return.

At a glance, Weapons Shop de Omasse appears to have a lot in common with a popular chapter from Dragon Quest IV on the Famicom, which revolved around a weapons merchant minding his shop while also battling to save the world. The execution here is quite different, however. Numerous RPG trappings are alluded to in the dialogue and elsewhere, but gameplay focuses almost entirely on weapons manufacturing. Thats virtually all you do when youre not conversing with clients.

Crafting is a simple enough process. First, you select a weapon that you would like to create from your gradually expanding catalogue--usually with an eye on potential stats following a request from a client who is planning to embark on a particular adventure--and then you are taken to the table and basin where you must turn a hunk of metal into something more useful. There are other points to consider, such as elemental refinements, but they dont change what happens next: a rhythm mini-game.

In that mini-game, you tap the screen with your stylus in time to simple music beats. You can also rotate and flip the metal, or stoke the forges flames to maintain the required temperature. Mistakes are permitted, to the point where its actually rather difficult to completely fail in a crafting attempt. The quality of your output suffers, though, unless youre able to exhibit at least some basic competence.

Once you successfully craft your chosen weapon, you can optionally enter another mini-game to polish it, which requires you to rub your stylus on the screen until the equipment shines with a pleasant sheen. You can perform the same chore when a hero returns from a campaign, as well. Doing so gradually improves the quality of your wares beyond any initial stats, which is important because it increases the likelihood that heroes will return in one piece and pay your fee or hand over bonus materials they discovered. Over the course of a 12-hour campaign, youll likely craft something like 100 pieces of equipment and polish some of the more popular items numerous times. In case youre wondering, that gets old very quickly, which surely explains the inclusion of a feature called the Grindcast. 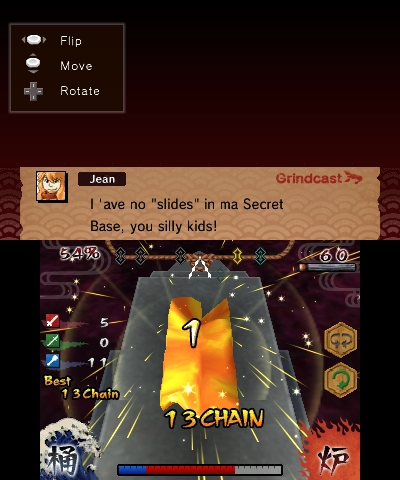 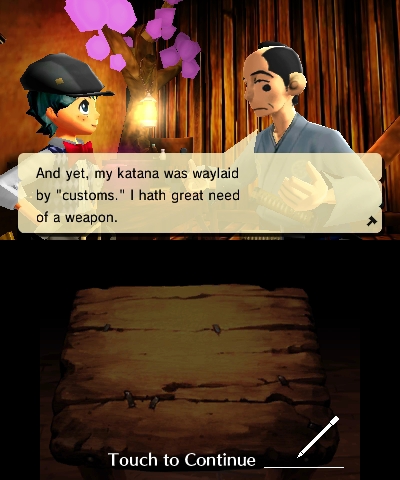 Essentially, the Grindcast is the games take on social media (complete with Twitter-style hashtags). The service consists of very brief messages from various people in the surrounding village, most especially the heroes you permit to rent your wares. If you pay attention, youll see some amusing jokes that reference various tropes familiar to long-time JRPG fans. However, its difficult to pay too much attention to the messages and jokes because theyre constantly being updated, even while youre busy doing things like ordering materials or crafting. This makes that particular element of the game more difficult to properly enjoy than was surely intended.

Another complaint I have concerns the cast of supporting characters, which is limited to a total of six. You actually only ever see any of them when they come to pick up or return equipment--or to report a failure and demand that you supply better gear the next time--and otherwise any development takes place by way of mostly inane comments on the Grindcast. If you lend them equipment that results in a failed mission, youll also hear a lot of repeat discussion on successive attempts, which definitely grates on the nerves.

Of course, you wont contribute to very many missions that end in failure if youre paying attention. The hardest part of the game is deciding what weapon to lend to each client, but even that isnt terribly difficult. Adventurers indicate a weapon type preference, and you are provided general information about monsters they can expect to encounter as they venture outside the village. Relying on that knowledge, you must then assign the optimal equipment while also making sure you dont part with anything you wont miss too terribly much if it never comes back. When I was playing, it took me an embarrassingly long time to grasp the difference between item attributes and item types, since some of the icons look very similar. I wasted time early on, but once I figured out the difference, reaching the closing credits was a simple matter of perseverance and patience.

I expected to have a good time playing Weapon Shop de Omasse. Certainly, many of the ingredients required to produce a lively fantasy simulation title are present and the game is handled well as far as it goes, but it didnt wind up offering enough variety to hold my interest for more than an hour or so at a time. The game is played in much the same general manner for its entire duration, which leaves a quirky but largely underwhelming cast to serve as your primary motivation to keep going. The end result is decent, but I cant shake the notion that it was very nearly something much better
2.5/5

If you enjoyed this Weapon Shop de Omasse review, you're encouraged to discuss it with the author and with other members of the site's community. If you don't already have an HonestGamers account, you can sign up for one in a snap. Thank you for reading!

© 1998-2020 HonestGamers
None of the material contained within this site may be reproduced in any conceivable fashion without permission from the author(s) of said material. This site is not sponsored or endorsed by Nintendo, Sega, Sony, Microsoft, or any other such party. Weapon Shop de Omasse is a registered trademark of its copyright holder. This site makes no claim to Weapon Shop de Omasse, its characters, screenshots, artwork, music, or any intellectual property contained within. Opinions expressed on this site do not necessarily represent the opinion of site staff or sponsors. Staff and freelance reviews are typically written based on time spent with a retail review copy or review key for the game that is provided by its publisher.