Developed by a small team called BoomZap, the Wii-exclusive Pirates PlundArrr is a mostly charming brawler along the lines of Castle Crashers that finds anywhere from one to four players chasing after a treacherous pirate captain named Rudebelly. Its a generally fun romp, but the experience differs substantially depending on how you play and theres no configuration that brings it to the level of the genres best efforts.

Pirates PlundArrr campaign stages are presented as nodes on a world map, with the bulk of them inaccessible until you clear preceding areas. Levels tend toward the lengthy side and often feature sections that are sufficiently distinct to feel like completely unrelated attractions. If a few players work together, as my two friends and I did, clearing most zones requires a solid 10 or 15 minutes of play before the group of heroes return to the map to choose a new destination. Such a setup suggests that the game is non-linear, but there arent actually enough branches in the path to matter.

Character progression is another promising game element that feels too limited for its own good. You can enhance a characters aptitude with certain weapon types--axes, guns, swords, daggers and clubs--and that impacts how capably they use the corresponding gear to carve a swath through the enemy hordes, or you can improve health, the power of special abilities, and the rate at which treasure drops. In theory, thats all very cool. In practice, it doesnt make much difference in anything but the single-player mode because the impact on combat is negligible at best. Armor is also available but appears to make only cosmetic differences.

My friends and I spent an hour or two with Pirates PlundArrr during each of several different gaming sessions in order to experience the entirety of the surprisingly lengthy campaign. Along the way, we typically progressed smoothly and faced moderate but still satisfying challenges. Occasionally, though, we encountered a severe difficulty spike. Cheap tactics and level grinding proved the only obvious ways to persevere (a lot of monsters will pick on only one player at a time, providing the others with time to revive one another or break open crates and such for healing items), and then we would advance several stages without any trouble. The lack of an even system of progression is disappointing.

That particular flaw is never more obvious than it is when you play with friends. If youre hunting Rudebelly with assistance from your pals, you can revive them when they collapse and they can return the favor. The developers must have figured that dynamic had the potential to eliminate too much of the campaigns potential challenge, and that apparent concern led to some severe overcompensation. Bosses become several times more durable and basic enemy mobs are significantly more numerous when you have human allies, to a degree that finally becomes prohibitive during the last four or five levels. Tough foes call for help from friends of their own, and that soon leads to a hefty number of heroes and villains on-screen at once. Your character can become lost amidst the chaos, and stages begin with severe slowdown that lasts for several seconds even if theres not much happening on-screen. The heftier enemy life meters may have seemed like a good idea, but they allow foes to linger for a long time, potentially causing severe damage the whole while. Its too easy to be overwhelmed, and since the camera forces the action to never stray terribly far from the first player if he or she falls in battle, sometimes an ally will try to come revive you but cant due to an uncooperative camera. 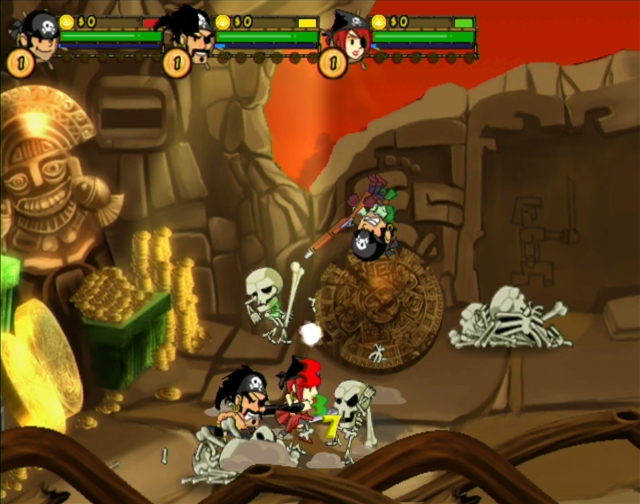 By the time my friends and I reached the games final boss together, our character levels were in the late 30s and early 40s. Our adversary would repeatedly summon hordes of allies, and clearing those fellows out of the way only prompted replacements to arrive. There was virtually no respite, and in the end we only cleared the game when it glitched and one of us was suddenly able to hack away at the enemies from an unreachable perch on a nearby wall. Most gamers wont be able to count on that sort of lucky break.

After the credits rolled, I decided to see how I might fare against those same enemies while playing alone. I was expecting to discover an insane challenge, but instead I was surprised by how handily I defeated every single enemy I encountered without even really needing to try. The final boss that gave my friends and I so much trouble was now an utter cakewalk. I also advanced levels much more quickly, which is nice given the numerous hidden characters you can unlock and strengthen over the course of the campaign, but now I didnt need to grind because everything was overly easy. Summoned enemy mobs suddenly consisted of two enemies instead of the eight my friends and I had faced, and my attacks demolished life meters several times as quickly. The difference is frankly absurd. I recommend that you play through the campaign alone if you want to enjoy a relaxed quest, but bring friends along if you prefer a challenge and the sort of social experience that the best brawlers often enable. 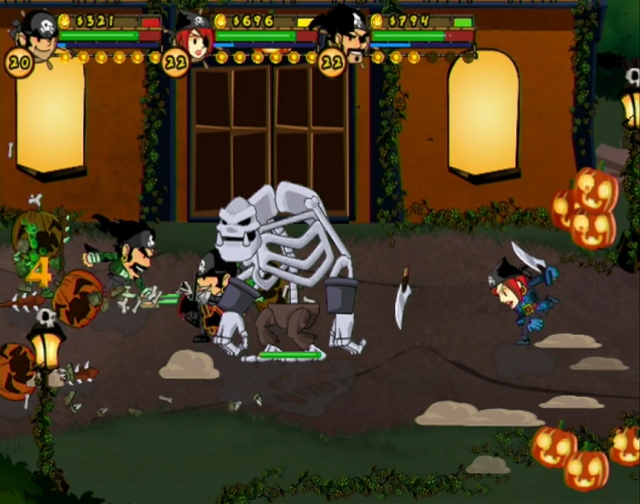 The other stuff I might tell you about Pirates PlundArrr almost doesnt matter. Aside from the issues with difficulty balance, the game is competent and sometimes even great. Its visual design feels a little bit cheesy at times, but in other cases the character and enemy sprites are quite expressive and the backgrounds are gorgeous (given the hardware, at least). Controls are pleasingly simple, with buttons mapped so that you hold the Wii Remote sideways like an old NES controller. Its easy to miss the fact that you can collect energy orbs and then shake the Wii Remote to unleash a special lightning move thats handy for crowd control--a point mentioned nowhere in-game or in the instruction manual that I noticed--and sometimes you might accidentally press B to block without meaning to, but otherwise everything is obvious and works efficiently.

If you own multiple gaming systems, you probably already have some excellent brawlers available to you in the form of Castle Crashers and other recent fare such as Scott Pilgrim vs. The World. There are numerous retro classics that are also worth revisiting, and at least for now, those are readily available on the Virtual Console service. If you only own a Wii or Wii U and youre looking for something both decent and more recent, however, Pirates PlundArrr is an attractive option that should provide several hours of enjoyable brawling.
3/5

If you enjoyed this Pirates PlundArrr review, you're encouraged to discuss it with the author and with other members of the site's community. If you don't already have an HonestGamers account, you can sign up for one in a snap. Thank you for reading!

© 1998-2020 HonestGamers
None of the material contained within this site may be reproduced in any conceivable fashion without permission from the author(s) of said material. This site is not sponsored or endorsed by Nintendo, Sega, Sony, Microsoft, or any other such party. Pirates PlundArrr is a registered trademark of its copyright holder. This site makes no claim to Pirates PlundArrr, its characters, screenshots, artwork, music, or any intellectual property contained within. Opinions expressed on this site do not necessarily represent the opinion of site staff or sponsors. Staff and freelance reviews are typically written based on time spent with a retail review copy or review key for the game that is provided by its publisher.