I dont recall ever thinking as I played Plants vs. Zombies on the PC that it would make the perfect third-person shooter, but thats precisely how I responded to the first trailer for Plants vs. Zombies: Garden Warfare. The new game looked like it might manage to capture the manic mayhem and personality that made the quirky tower defense series such a joy while finally offering enough action to satisfy adrenaline junkies, and that excited me in spite of the slight apprehension I also felt.

Months later, the final product has arrived and I am glad to say my initial optimism has been validated. If anything, the game turned out better than I hoped it might, thanks to common sense design that avoids most of the numerous pitfalls that seemed likely to result from the dramatic shift in play style. Its easy to label Garden Warfare an unnecessary addition to a medium that already offers players so many ways to shoot things, and its just as easy to forget such concerns the minute you actually start playing. 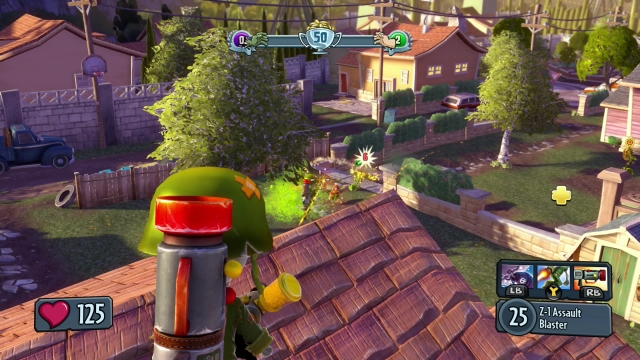 Theres no single-player campaign in Garden Warfare, just a mode where you try to defend key points on a chosen map from approaching waves of zombies. During the preparation phase, you plant helpers in various pots stationed around an area you choose to protect (if you dont mind using consumable cards that you can purchase using in-game currency), and then you run around yourself, gunning down any undead trespassers that appear. The mode also offers local split-screen play, but my wife finds the idea of plants and zombies battling one another too absurd to even contemplate and I also dont have a second controller. Another option is to head online to join up with strangers, but I tried doing so on several occasions on multiple evenings and I was never able to advance past the lobby. Most folks playing online appear to be addicted to the games less cooperative side.

I cant say that I blame them. There are five options for play and theyre all terrific. First, there is Welcome Mat. Its a great place for newcomers to start, because anyone who has a run of embarrassing defeats can bounce back with extra health and stand a fighting chance. Character variants and upgrades are also disabled. There also are two Team Vanquish modes, one that allows upgrades and custom costumes and another that doesnt. The last two available modes find one team trying to defend various points (as plants) while the other team (zombies) tries to capture and hold them. That process ends with a zombie rush to claim a mansion before final points are tallied.

At a glance, none of the above seems particularly unique. Gaming veterans have seen the same approximate objectives play out many times in the past with the main difference being a grimmer veneer, in popular titles like Call of Duty or Battlefield, and yet theres unexpected depth here that makes Garden Warfare special even if the comical art style, peppy music and vibrant environments are ignored. I think what does the most to make everything work is the selection of eight unique character classes. On the zombie side, you have engineers who can run around tossing explosives or riding jackhammers to gain speed for a short period of time. Foot soldiers wear jet packs and can launch themselves to rooftops and high ledges, while the all-star can punt explosive friends like a football or charge through the opposition in a blur. The scientist, meanwhile, is able to set up healing stations that spray valuable life force. Additionally, he can warp short distances and packs a fairly powerful weapon (that doesnt actually have much ammo).

I prefer to play as one of the plant classes, though. The peashooter can use a burst of speed and agility to leap to rooftops and fire shots, or to convert to the Gatling gun for good damage. Chompers are able to burrow into the ground and emerge from the soil a short time later, perhaps dealing a fatal blow but also leaving themselves open for a brief period. The cactus is basically a sniper, capable of littering the battlefield with potato bombs, and the sunflower fills the traditional medic role.

Every character is capable of reviving fallen comrades, and this matters a great deal. The goal in most modes is to be the first team to score 50 kills, but a revived player doesnt count as a kill. A capable team can run around the battlefield, negating each kill (provided anxious players who are shot down dont elect to immediately re-spawn and thus eliminate the option), so that the winning side isnt necessarily the one that does the most offensive damage; its the one that plays better. The exception to that rule is the Chomper s special move, which no zombie comes back from. The finality of that attack might seem to give the plants an unhealthy edge in any fight, but it really doesnt. There are plenty of means of evasion for smart zombies, and the risk can also outweigh the reward. Besides that, moves other than standard fire--a mostly ineffectual spit attack, in the case of the otherwise nasty piranha plant--have cooling periods that prevent them from being spammed mercilessly. All of those elements come together quite smartly to ensure that most matches are well balanced, tense, and remarkably lively. 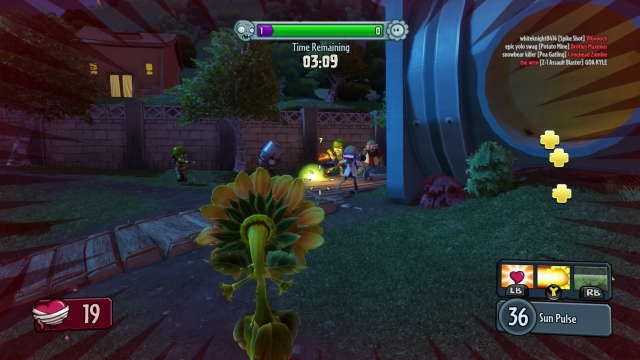 At first, coming to grips with all of the options amid the chaos can prove difficult, but that problem goes away almost immediately if you pay attention. When you start playing, you have access to only a single special move, and you learn new ones by mastering the initial one. You might be asked to deploy an air drone several times, for instance, which forces you to spend time with that ability and to grow familiar with it. The same process repeats for every new ability and character class. Its quite effective.

The Team Vanquish modes typically last a few minutes each, and in general you alternate sides each successive round. Its possible to switch teams and to change your character class each time you spawn, if youre unhappy with how things go, but I was mostly content to just let the game decide where I was placed. Between rounds, you are awarded coins based on your performance, with extra coins granted for reviving comrades and taking out adversaries and the like. Those coins can be spent on sticker packs that grant new taunts, accessories, consumable items (for the single-player mode), abilities, and player mods. Gathering enough currency to buy another one is surprisingly addictive and sometimes kept me awake and gaming a few hours after I should rightly have gone to bed.

Plants vs. Zombies: Garden Warfare is not the game anyone I know was asking for, but its a joy to play and Im glad I gave it a shot. The developers did a terrific job of balancing the various elements so that nearly every match offers an addictive mix of strategy, mayhem, and the trademark humor for which the series is known. Its accessible, engaging and endearing in just the right amounts, and I highly recommend that you play it soon.
4.5/5

If you enjoyed this Plants vs. Zombies: Garden Warfare review, you're encouraged to discuss it with the author and with other members of the site's community. If you don't already have an HonestGamers account, you can sign up for one in a snap. Thank you for reading!

© 1998-2020 HonestGamers
None of the material contained within this site may be reproduced in any conceivable fashion without permission from the author(s) of said material. This site is not sponsored or endorsed by Nintendo, Sega, Sony, Microsoft, or any other such party. Plants vs. Zombies: Garden Warfare is a registered trademark of its copyright holder. This site makes no claim to Plants vs. Zombies: Garden Warfare, its characters, screenshots, artwork, music, or any intellectual property contained within. Opinions expressed on this site do not necessarily represent the opinion of site staff or sponsors. Staff and freelance reviews are typically written based on time spent with a retail review copy or review key for the game that is provided by its publisher.