When experiencing Kung Fu Kid for the first time, it feels so standard and innocent. Starting outside in the plains, your brown-haired martial artist is immediately assaulted by a non-stop brigade of killer zombie monks and Chinese hopping vampires. With only one button to attack, a kick, you push forward to the right, fending off the rush that constantly burst from both sides of this side-scroller. Eventually, you find yourself in a bamboo forest, and before long, you're up against the first boss, an evil priest! The usual "tactic" of walking up and kicking an enemy won't sit well with this guy, and after a couple bruises, you discover the best way to injure him is by jump-kicking upward through his bald head. An odd method, but okay. 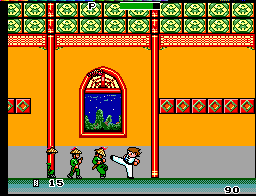 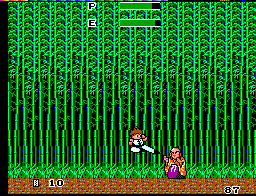 With one boss down and a new method of attacking, the uncanny jump kick, you march into the second level against gun-wielding soldiers that never fire their weapons and lobsters that fall from the ceiling. Sure. If you can ignore for a second the absurdity of what I just described, Kung Fu Kid sounds like a fairly average, middle-of-the-road action title. I would have been fine with this and accepted it. But there's a problem, an elephant in the room so embarrassing that it makes you wonder how the dev team thought they could sneak it by players.

As has been noted, you can jump, but the one detail I haven't addressed is that you can jump really high when holding down the button. Like, the type of jump that's normally accessible through cheat codes in other games. Considering four of Kung Fu Kid's seven short levels are wide open locations and none of the enemies have any way to combat your brief ascensions into the sky, saying that the game's design collapses in on itself is an understatement. You'll occasionally get hit by a lucky vampire as you land, but the benefit of getting through levels faster is worth the "risk". And this isn't something the people who made the game easily overlooked, because more than half the boss battles involve your character jumping high just to hit them! They knew, and did nothing to rectify the problem.

Surprisingly, the best level in the entire thing is the sixth, and it happens to be a boss gauntlet. In a different scenario, I would have groaned at the sight of one, since I see it as a sign of lazy design, but with Kung Fu Kid, it's a welcomed challenge to the overall easy and broken feel of the game. I guess what also helps in this instance is that you're actually fighting a slew of new bosses instead of recycling the previous battles. But after that, the last level throws you back into another wide open area, doing the same routine as before with no attempts at variation. Before you know it, you've defeated the final boss in an embarrassing display of combat, watch his spirit float into the sky, see THE END plastered on the screen, and all you're left with is a feeling of nothingness. 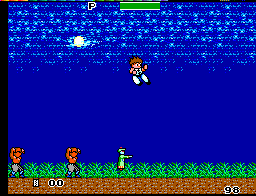 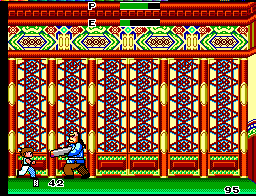 Had Kung Fu Kid's problems been fixed, could it have been a decent romp? Interestingly, you do get an insight of sorts with the two maze-like levels, where jumping high is slightly limited due to lower ceilings. Doll opponents that fire projectiles somewhat add to the difficulty and, oddly, there are moments where you need to wall jump to higher platforms. Keep your pants on, the latter doesn't occur much. Now, I did find these levels a bit tough at first, until I realized the kung fu fighter has another move up his sleeve: talisman. With a well-timed throw, a single talisman can pass through multiple enemies and kill them, making for a safe passage to the frog boss, whose only pattern is to hop around slowly until you kick it off screen.

So, the game is pretty much broken regardless of how you play it. That's swell.
1/5

If you enjoyed this Kung Fu Kid review, you're encouraged to discuss it with the author and with other members of the site's community. If you don't already have an HonestGamers account, you can sign up for one in a snap. Thank you for reading!

© 1998-2020 HonestGamers
None of the material contained within this site may be reproduced in any conceivable fashion without permission from the author(s) of said material. This site is not sponsored or endorsed by Nintendo, Sega, Sony, Microsoft, or any other such party. Kung Fu Kid is a registered trademark of its copyright holder. This site makes no claim to Kung Fu Kid, its characters, screenshots, artwork, music, or any intellectual property contained within. Opinions expressed on this site do not necessarily represent the opinion of site staff or sponsors. Staff and freelance reviews are typically written based on time spent with a retail review copy or review key for the game that is provided by its publisher.