War of the Human Tanks is going to be a nightmare to pigeonhole but, what the hell, Ill give it a go. Its a kind of turn-based/real time strategy hybrid that plays out like a surreal re-imagining of Battleships if it had a bizarre advanced edition, book-ended by adorable still-framed anime girls exploring the morality of throwaway militias. About half the game plays out like a simplified visual novel chronicling the civil war of the imaginatively named country of Japon, who battle amongst themselves using humanised chibi robots that all just happen to be cute girls. These sections are long, dumping a librarys worth of text on your lap backdropped to simple non-animated character portraits with very limited reactions, all set against a photographic background thats been given a thin layer of photoshopping. Its all very Meta, assuming that the player will identify with the protagonist by making him an anime-obsessed shut-in with an addiction for limited edition video games. He just happens to also be a strategic genius respected throughout the world. Some of that probably does resonate for a few of you; only the latter half for myself.

The plot itself is mired not only in pure weight of words, but heavily in anime tropes, wheeling out all the expected stereotypes and, odds are, youll find yourself skipping most of the dialogue after a while. Im not about to place blame; Human Tanks seems almost desperate to crush you in sheer volume of words, but it does try to advance a somewhat subtle sub-plot in the mistreatment of its ranks. Though programmed to be considerably less intelligent, the Tanks are given ample opportunity to endear themselves to the player. The aftermath of their first battle leaves them somewhat shaken by the loss of a long-standing colleague, while a tedious mission to hunt down stray Tanks in a forest leads them to spontaneously down arms to play an impromptu game of baseball where fly balls are shot down with bazooka fire, and third base might explode at any second.

The problem is that moments like this are buried beneath unending slews of paragraphs so often that genuinely touching or amusing moments are lost during frantic clicking or full on (and oft appreciated) text-skipping. Its the usual zany manga fare served up by people with humongous eyes, and it probably wants to be considered a kind of serialised anime by playing (the same) intro and ending song at the end of every chapter. You can stop this by setting Movie Mode to off in the options.

PROTIP: Set Movie Mode to off. 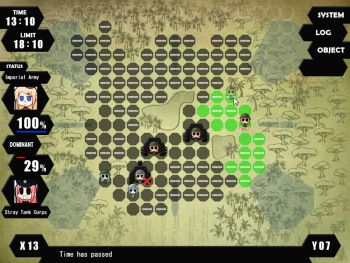 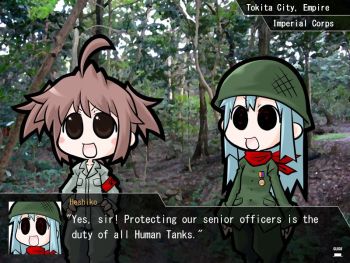 Somewhere trapped in between all the exposition, though, is the actual warfare. War of the Human Tanks presents you with a simple hex grid, coats the entire thing in a permanent fog of war, then tasks both you and your enemy to fumble around in the darkness trying to blow each other up. It plays out in pseudo-real time; the map is always active, but units have to wait until theyre able to receive a signal to move, then their modem resets after their action has taken place. Its an interesting mechanic bolstered by the fact that the majority of the map is always going to be obscured and that your enemy operates under similar conditions. It can be quite tense waiting for your next move to come around, knowing that unseen activity is just beyond your visual range.

Different units bring in their own measures. Scouts are predictably lacking in offensive skills, but can forge ahead of the rest of your troops, mapping out larger areas of recon, while assault troops cant uncover as much hidden space, but possess a much higher aggressive range. Shock troops have a high activation rate, cover much larger movement areas, and employ explosives that have superior blast zones, but are fated to die in their own detonation. Some units are more useful than others; you can handily beat the game without ever needing the Interceptor soldier, who can safeguard selected areas from long-range bombardment, and no matter how well developed your Command unit becomes, its rarely worth the risk of moving them out of whatever corner you have her hiding. Once they die, you see, you lose. The upshot is that destroying the oppositions Command is grounds for instant victory. 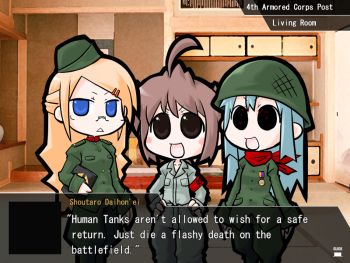 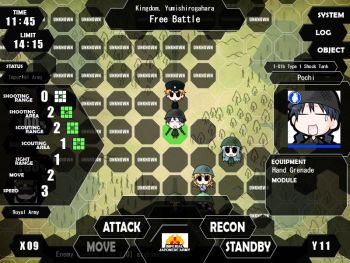 Did I mention that every solider is a cute girl who makes an adorable Aieeeeee! cry just before she dies in a ball of fire? Every now and then, that still strikes me as a little odd in the face of how cut throat the battles are. Scouts can barely hold the handguns they use to slaughter smiling enemies with vacant red swirling eyes and aqua-blue pigtails. You can use the spoils of each victory to slowly develop advanced units, making them more deadly, or giving them the chance to survive more vicious onslaughts at the cost of taking up more room. In an odd turn, these could lead to blocking troops in at the start of several campaigns as you often start in claustrophobic corners of the maps, and units are unable to move through their allies. You can bolster spoils by taking part in free battles, which are usually just old levels replayed again, but the costly, heavy upgrades are unlikely to be achieved outside of a New Game +.

War of the Human Tanks offers four different endings with slightly differing branches required to unlock them, and the tense rapid-fire battles are both enjoyable and brief enough to stand up to repetition. Theres no multiplayer options, which is a shame, because thats a possibility that could certainly work with Human Tanks' ephemeral take on warfare, but what is offered is innovative and unique. Its weird; the saturnine sweet hyperactive anime cuteness doesnt really have any right to exist in the face of merciless conflict, and it certainly sometimes shoots itself in the foot by trying too hard. But it all kind of.. works. It has this peculiar synergy probably born of the programming equivalent of a sugar rush that swirls everything together.

If you enjoyed this War of the Human Tanks review, you're encouraged to discuss it with the author and with other members of the site's community. If you don't already have an HonestGamers account, you can sign up for one in a snap. Thank you for reading!

© 1998-2020 HonestGamers
None of the material contained within this site may be reproduced in any conceivable fashion without permission from the author(s) of said material. This site is not sponsored or endorsed by Nintendo, Sega, Sony, Microsoft, or any other such party. War of the Human Tanks is a registered trademark of its copyright holder. This site makes no claim to War of the Human Tanks, its characters, screenshots, artwork, music, or any intellectual property contained within. Opinions expressed on this site do not necessarily represent the opinion of site staff or sponsors. Staff and freelance reviews are typically written based on time spent with a retail review copy or review key for the game that is provided by its publisher.