AquaPazza is a gorgeous arcade fighting game from Examu, the team responsible for the Arcana Heart series. It shares a lot in common with those titles, including the general simplicity and the focus on combatants of the female persuasion, which probably will go a long way toward eliminating any broad appeal it might have had. I happen to like it anyway.

As much as I appreciate the game, though, I also recognize that its by no means a must-have title. Atlus already published King of the Fighters XIII on the same system, a game that comes a lot closer to earning that particular distinction, and AquaPazza is left to serve as merely a decent excuse to spend money on yet another fighting experience after youve tired of the genres essentials. 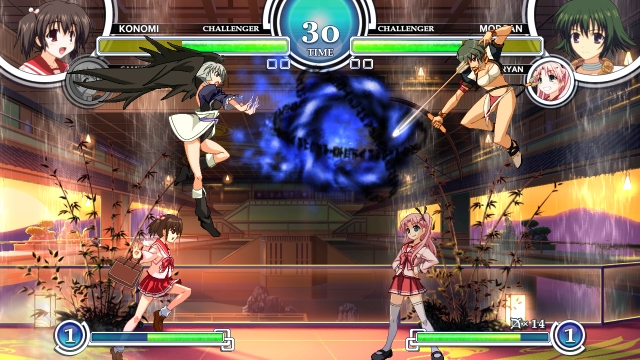 AquaPazza features 13 fully playable characters, along with a similarly lean helping of secondary support members who can only be tagged in for a few seconds to function as your ace in the hole. You pick one warrior from the first group and one from the second, and then you take on an opponent--local buddy, online acquaintance, or computer AI--who has fashioned a tag team of his own. In addition to standard diversions such as Versus, Score Attack, and Training, there are Story and Another Story modes that provide a large part of the titles appeal.

The difference between Story and Another Story mode is negligible. The first tells an extremely basic tale about a mischievous witch named Ma-Ryan who tried to put together a love potion but instead managed to craft AquaPazza, a volatile concoction that mashed a bunch of dimensions together so that heroes and heroines from each to interact with one another. Depending on the character you choose, youll see this story from a slightly different angle, but the lions share of scenes are virtually identical no matter who you select. Once you clear that mode with a given character, he or she becomes available within Another Story mode, which follows the same basic process but offers a different boss and a fresh yarn about wish fulfillment. Neither narrative strand is interesting for more than a few seconds, but the combat youll face along the way is worthwhile. The artwork you access after clearing each initial campaign is also quite lovely, and you can view it in the gallery at your leisure.

Combat feels loose, about like it did in Phantom Breaker. Once you start to execute a move, the animation will complete in a rather labored manner (whether it comes anywhere close to its intended target or not) and that means you need to be careful about what you commit to. Button mashing works when youre a newbie and going up against someone with a similar lack of skill, but otherwise its easy to overextend yourself. Punishing combos are your opponents inevitable response to such blunders, and youll be knocked about like crazy while your life meter empties. 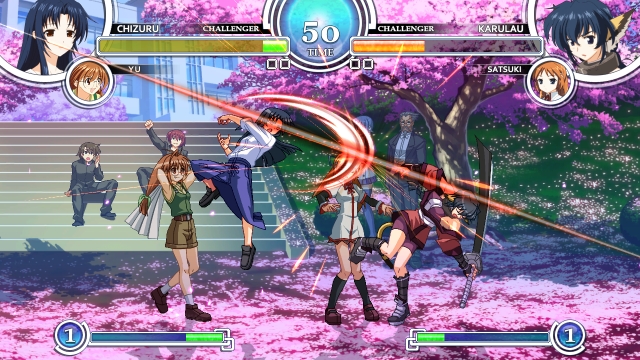 Playing AquaPazza made me appreciate how difficult it must be to balance characters in a fighting game, in part because I dont feel that the developers got it right here. I first started by playing online as Oboro, and I rather handily kicked my opponents butt despite never having played the game before that point. However, such victorious moments didnt come along frequently as I explored other options. A lot of the fighters are extremely capable, and a skilled player can mop the floor with me because Im never expecting to face the devastating series of moves that inevitably comes my way.

Consider Riannon, a sorceress. She relies primarily on a variety of projectile attacks, which she executes at the press of a single button. You have three basic attacks with any warrior--weak, medium, and strong--and in Riannons case, the latter two will send whirling energy blades either in a straight line or in a powerful arc at a set range. If that approach doesnt suit you, simply press Down on the d-pad along with a face button and you can produce a shockwave that covers the ground in either direction. If someone leaps toward you, hit the strong and medium attack buttons at once (or just squeeze a shoulder trigger) to produce a destructive ball of aura directly ahead of you. In capable human or AI hands, Riannon is an absolute terror.

Another powerful character is Manaka, a young lady who doesnt look like she should be able to do much of anything until she summons a series of massive bookshelves out of nowhere. Those shelves then topple in the direction desired, like so many oversized dominoes, and theyre very difficult to avoid. In the single-player mode, I cleared her campaign simply by spamming that single move repeatedly. Its ridiculous. 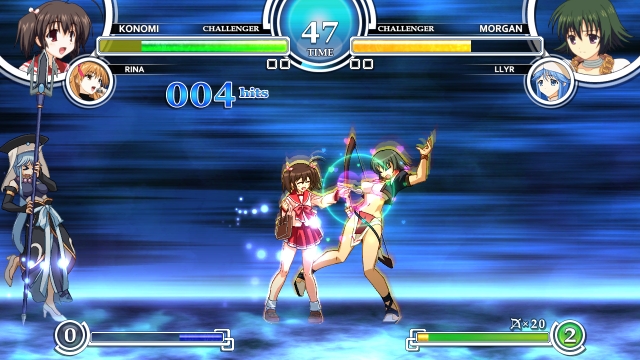 Some other characters arent anywhere near as powerful as the ones I mentioned above--at least not in any immediately obvious ways--and yet they become interesting once you spend time mastering them. Konomi plays about like Sakura from the Street Fighter series, so I had a relatively easy time with her. Morgan resembles Vega from that same franchise, except she carries around a bow and fires arrows from a quiver that could wind up empty by the conclusion of a match. She seems like she ought to easily serve as a genuine force to be reckoned with, but she doesnt hit hard enough unless you cobble together a combo. Her appeal lies in her rapid mobility, which isnt even a huge benefit against some opponents who fill half the screen with projectiles as a matter of course.

If AquaPazza were a bit more balanced, I would enjoy it much more than I do. Even so, its pretty enough and offers just enough complexity--particularly thanks to a system that lets you briefly tag in an ally for a complementary body blow or shield or projectile burst--that I cant help but want to play it more and keep improving. That desire to stick with things long enough to get better is helped along by a basic but serviceable online mode that lets players create lobbies and then spectate or join the queue to participate in an upcoming match. The better you are, the more time you get to spend kicking butt. When I played online, I often had to watch three or four matches for every one or two I actually played, just because I went to the tail end of the queue each time I lost, but I can imagine a group of three people having quite a lot of fun playing a bunch of rounds where theres never more than one spectator at once. Im also happy to report that I didnt have any issues with lag ahead of the games launch in North America. I hope that remains true once it reaches a wider audience.

AquaPazza is unlikely to make much impact in the fighting games scene. To me, it seems to have more balance issues than its contemporaries do, plus fighting fans seem in general to shy away from anime-styled games that feature an abundance of skirts. If youre not bothered by anime stereotypes, or if you sometimes prefer a more light-hearted approach, then the game is at least worth a look and is perhaps the best of its kind that youll ever find on PlayStation 3. Otherwise, take the fight elsewhere.
3/5

If you enjoyed this AquaPazza: AquaPlus Dream Match review, you're encouraged to discuss it with the author and with other members of the site's community. If you don't already have an HonestGamers account, you can sign up for one in a snap. Thank you for reading!

© 1998-2020 HonestGamers
None of the material contained within this site may be reproduced in any conceivable fashion without permission from the author(s) of said material. This site is not sponsored or endorsed by Nintendo, Sega, Sony, Microsoft, or any other such party. AquaPazza: AquaPlus Dream Match is a registered trademark of its copyright holder. This site makes no claim to AquaPazza: AquaPlus Dream Match, its characters, screenshots, artwork, music, or any intellectual property contained within. Opinions expressed on this site do not necessarily represent the opinion of site staff or sponsors. Staff and freelance reviews are typically written based on time spent with a retail review copy or review key for the game that is provided by its publisher.