Nihilumbra is probably a game you've played before in some fashion -- it's the purposefully pretentious indie puzzle-platformer in the same vein as Limbo or Deadlight. This isn't a criticism; those games are awesome and, in its own little way, so is this one.

Starting life as an iOS download, Nihilumbra's arrival on a PC (and, at some point, the WiiU's eShop) is about as smooth a transition as can be imagined. Though the game was manufactured with touch screens in mind, the ease in which it has been made to work with a keyboard and mouse is laudable. The graphics have been upscaled to a striking HD, and voice over work has been added in the shape of a disembodied narrator. I could continue to applaud these technical exploits, but I'd be missing the point a little.

Nihilumbra is a game focused around a being called Born, spat out of The Void, and scrambling frantically for a sense of independence and freedom it may not have any right towards. It arrives on a suspiciously barren world, chased by the chaotic entity that birthed it with only one goal -- to survive another day. The Void is, at all times, all-encompassing, devouring anything it touches, and spitting abominations out into the world in an effort to stop Born and reclaim him as its own.

Born's only existed a matter of seconds when you first meet him. The only thing he's certain of is that he doesn't want to go back. 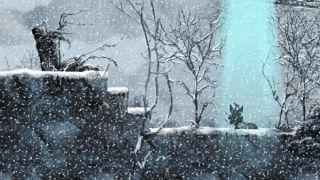 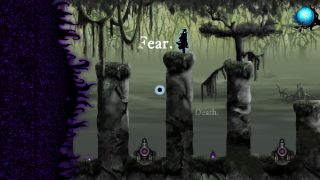 What you effectively get is a story of escape, narrated well by a disinterested commentator as Born picks through the exposed ribcage of his new home. The swirling snows of the cold mountains, to the earthly glow of the living forest are all now infected with bizarre creatures from The Void, all deployed in an effort to see Born returned. Snuggled within the barren terrain that throws up less hostile obstacles, Born has to find a way through the very heart of their ranks in order to emerge safe on the other side. He does this by employing colours.

Each stage teaches him a new colour and, in this, a new way to change the environment around him. From the snow-capped mountains comes Blue, and the ability to make surfaces slick and slippery. This can be used to trick foes into falling off ledges, or used to give Born a speed boost, helping him leap further. The forest gifts him Green, which makes surfaces bouncy, letting him spring over obstacles, or reach higher platforms.

These environments are beautifully hand drawn, featuring fluttering snow or falling leaves delicately coating the foreground, but, mostly, they're more than a little devious. Upon collecting your second colour, the ever-present narrator congratulates you, but warns you that, though an extra colour may make you believe things are about to get easier, they're instead probably about to become more complicated. 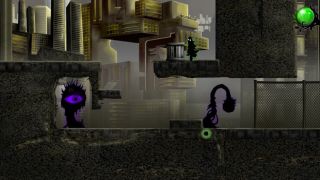 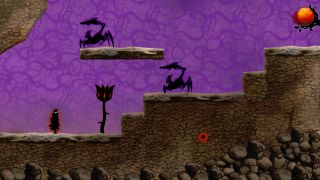 Back when this was an iOS game, you laid down colours by swiping the touch screen, but that's flawlessly replicated with mouse strokes. With up to five colours to manipulate by end game, you need to cerebrally pick your way through the sobering landscapes. Sometimes you just have to figure out a way to get a crate on a pressure pad. Sometimes, you need to pick you way through shadowy scorpions with laser cannons strapped to their tails. Sometimes, you just have to run.

Every level is capped with a scrolling stage with the entirety of The Void in close pursuit of Born, robbing him of the chance to sit back and think about how to achieve his next goal. It's not set to a frantic pace, but the creeping insistence and never-ending trudge of The Void is, in itself, more indicative of you foe. It will never cease; it will never stop. It will crawl onwards into eternity, never tiring or losing interest.

Nihilumbra is clever like that. It doesn't just throw out a few puzzles, wrap them in artistic sheen and then allow itself to look smug. It could just do that, and it will still be a game worth playing, but it uses subtle little touches cleverly. Learning Red at the base of a volcano gifts you the power to finally kill off foes, and the game presents a decent sized stretch where you can bypass puzzles easily by frying everything on screen to a crisp. You become overly reliant on your new skill -- then huge Void snails appear, erasing any colours you put down by sliding over them. Because The Void evolves. It sees how you bypass the traps it lays, and tries to figure out a way to counter-attack.

While it's fair to say that Nihilumbra remains a game you've played before in some fashion, that's no reason to dismiss it. It's beautifully crafted with care and design, featuring a brilliantly orchestrated soundtrack and a sad tale lurking beneath the adventure. Born was never meant to exist; he knows that. Through the narrator, it's often argued that he's doing nothing but harm for cursing the world with The Void's constant pursuit. But doesn't he have a right to his own existence? Is slowly destroying an entire world too harsh a cost for trying to hang on to life for just a few more hours?

Nihilumbra can surprise you if you let it.
4/5

If you enjoyed this Nihilumbra review, you're encouraged to discuss it with the author and with other members of the site's community. If you don't already have an HonestGamers account, you can sign up for one in a snap. Thank you for reading!

© 1998-2020 HonestGamers
None of the material contained within this site may be reproduced in any conceivable fashion without permission from the author(s) of said material. This site is not sponsored or endorsed by Nintendo, Sega, Sony, Microsoft, or any other such party. Nihilumbra is a registered trademark of its copyright holder. This site makes no claim to Nihilumbra, its characters, screenshots, artwork, music, or any intellectual property contained within. Opinions expressed on this site do not necessarily represent the opinion of site staff or sponsors. Staff and freelance reviews are typically written based on time spent with a retail review copy or review key for the game that is provided by its publisher.