As I plunged into Deadlight, an overwhelming sense of familiarity hit me. Not only does the game take place during a zombie apocalypse, but it's set in Seattle. Bear in mind that I'm a Washingtonian who's visited the city more than a few times, so it's not exactly an exotic environment to me. The game's familiarity runs deeper than its setting and premise, though. It's visually similar to the dark platformer Limbo, except with more realistic character models. Mechanically, the game plays a lot like the ancient sidescrolling adventure Out of this World, what with its appropriately stilted play control and gameplay based on observation and logic. All things considered, I should have slated the game for its lack of originality, but a strange force called "enjoyment" prevented me from doing so.

I dug Deadlight's many moments of leaping and climbing through dilapidated buildings and empty warehouses. I also loved throwing switches and blocking exits to keep the dead at bay. Most of all, I enjoyed puzzling out where to go next while in a building. Sometimes the campaign's rail wasn't apparent, and I'd find myself in a bind. I'd scratch my head and ponder as quickly as my little brain could, the undead pounding on the walls and emerging from the darkness all the while. That led to a lot of tinkering and risk-taking, especially when dropping blindly into a room below me. I never knew what waited in the darkness: a hungry flesh-eater or harmless clutter. 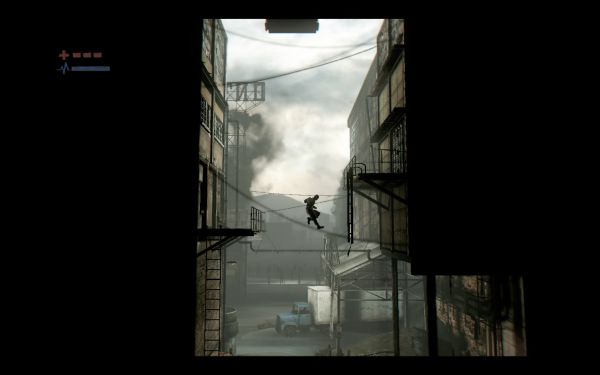 There was a sense of dread that hung over me any time I was indoors. Even if the coast seemed clear, I always felt like a zombie or two (or a dozen) would pounce out of nowhere, with arms outstretched and jaws ajar in anticipation. Sure, I had a firefighter's axe and a couple of firearms to fight them off, but the game's combat was not exactly ideal. Ammo was scarce, so I was very stingy with my bullets. Battling zombies melee-style often chewed up valuable minutes and left me vulnerable. Moreover, the racket I made fighting them off usually alerted zombies in the background. That's right, Deadlight's background baddies were more than decoration. If they became aware of my presence, they rushed to join the flesh-eating rabble.

Personally, I enjoyed the outside segments more than the interior scenes. There was less platforming, but the atmosphere was much thicker outside. I recall taking in the disheartening sight of the ruins of society, complete with wrecked skyscrapers and a lonely Space Needle in the background. Roads were choked with abandoned cars and littered with crumbled bits of civilization. Although these scenes were bereft of the sense of claustrophobia that the interior segments bore, they tended to have much thicker crowds of hungry ghouls. These scenes weren't as much about trying to find an exit as they were about figuring out how to slip past a sea of undead without becoming lunch. That usually involved climbing up telephone poles and dangling from wires, or even running across billboards to pass over a dense horde. Sometimes it meant breaking into a full blown sprint and hoping that there wasn't a car in the street with an active alarm that would alert unengaged corpses. 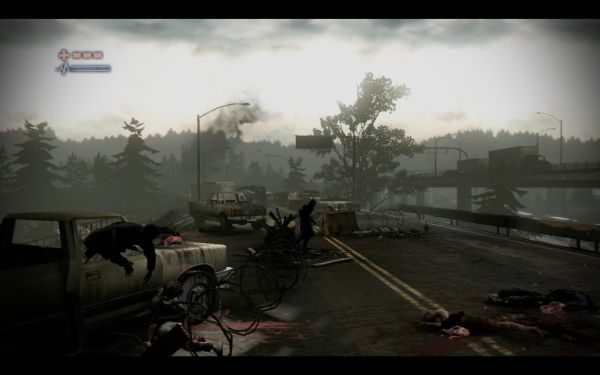 My favorite scenes in the campaign involved running like hell. Sometimes I'd exit a warehouse, only to be chased downhill by a carnivorous mob. I'd charge onward and leap over crates and fences, sometimes even utilizing a little Parkour to bounce off walls and reach lofty ledges. One misstep and the legions would be upon me. Sometimes I could slink away with a few cuts and scrapes, but a mistake usually meant curtains. My character didn't simply collapse while 'Game Over' popped up on the screen, either. Instead, my reward for failure was watching the undead drag the protagonist to the ground, where they made a feast of his warm living flesh.

As with almost any zombie apocalypse story, zombies were not the biggest threat to the protagonist's survival. As it turned out, renegade humans were a worse foe. I could have rolled my eyes a this device, especially since it's been used in just about every zombie apocalypse piece since 1978. However, in Deadlight it generated some of the most exhilarating scenes. There was one part in particular that involved leaping from skyscraper to skyscraper in an effort to elude a murderous helicopter pilot. Unlike the previously mentioned running sequences, the helicopter scenes were much less forgiving. One slight hiccup in the fleeing process ended with the copter turning my body into Swiss cheese. Since I'm not always the most precise button-presser, that occurred pretty often. It was enough to motivate me to run my ass off, which gave these scenes a proper feeling of tension despite their lack of actual horror.

Unfortunately, not everything about Deadlight was so delightful. At times it was difficult to advance because I couldn't distinguish between actual platforms and background objects. I often fell to my death leaping towards what appeared to be a piece of crumbled floor, only to discover it was a decoration. At other times, I'd ignore an item that I could interact with because it looked like it was an unimportant part of my surroundings. The game tried to alleviate this flaw by highlighting key pieces of the environment. Unfortunately, its tendency was to hold my hand and tell me precisely what piece I needed to interact with next, which killed a lot of the game's puzzles and robbed them of any brilliance they may have otherwise had.

Although it was pretty infrequent, there were a few cases in which the control response wasn't spot on. Sometimes I'd hit the 'jump' button long before reaching the edge of a platform, yet my character failed to leap. As you probably guessed, instances like that usually ended with my character staining the floor below. Since the game gave me infinite lives, death wasn't all that irritating. Still, it's annoying when you're attempting to leap off a wall to get away from a gang of zombies, only to find that the 'jump' button failed to respond. Let's just say that the only thing louder than my character's screams during such occasions was my f-bomb... 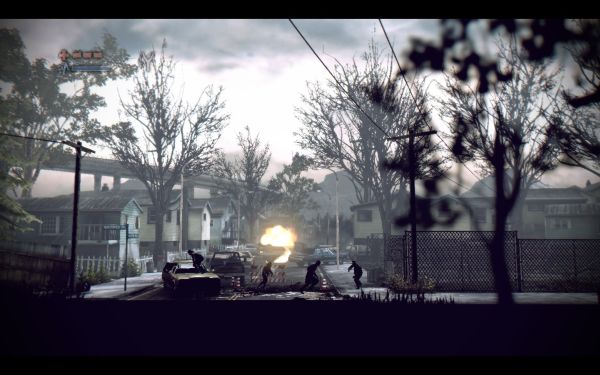 Despite a few minor hiccups, Deadlight is a great sidescrolling horror title. The game may not be original, but that shouldn't stop some folks from appreciating it for what it is: a tense and exciting thrill ride of a platformer with plenty of variety. In that respect, it pays the games it apes a fitting tribute.
4/5

If you enjoyed this Deadlight review, you're encouraged to discuss it with the author and with other members of the site's community. If you don't already have an HonestGamers account, you can sign up for one in a snap. Thank you for reading!

© 1998-2020 HonestGamers
None of the material contained within this site may be reproduced in any conceivable fashion without permission from the author(s) of said material. This site is not sponsored or endorsed by Nintendo, Sega, Sony, Microsoft, or any other such party. Deadlight is a registered trademark of its copyright holder. This site makes no claim to Deadlight, its characters, screenshots, artwork, music, or any intellectual property contained within. Opinions expressed on this site do not necessarily represent the opinion of site staff or sponsors. Staff and freelance reviews are typically written based on time spent with a retail review copy or review key for the game that is provided by its publisher.