The great zombie war of the mid-20th century has ended!

Normally, you'd read something like that at the end of a video game, especially one revolving around a zombie apocalypse, but Atom Zombie Smasher begins with that declaration. Incoming lighthearted fairytale? Well... considering the game's name.

Apparently, the war had taken a toll on the living side and they're in desperate need of repopulating the planet before the remaining Zed forces take a chomp out of any more flesh. So, your entire objective of AZS is to go into cities on the verge of being overrun with the undead, saving as many helpless humans as possible. With that said, the first mission in this title only hands you a rescue helicopter with no defensive capabilities, and you're forced to watch as numerous residents get cornered and transformed while continually coming and going from the slaughterfest. Such a somber way to start a game, but don't fret, as you'll receive a steady array of weaponry, units, and upgrades to, hopefully, turn the tide. It's also a race against time, as you and the zombies are battling it out with a scoring system, and whoever reaches the set goal will be the champion in the, um, post-war war? 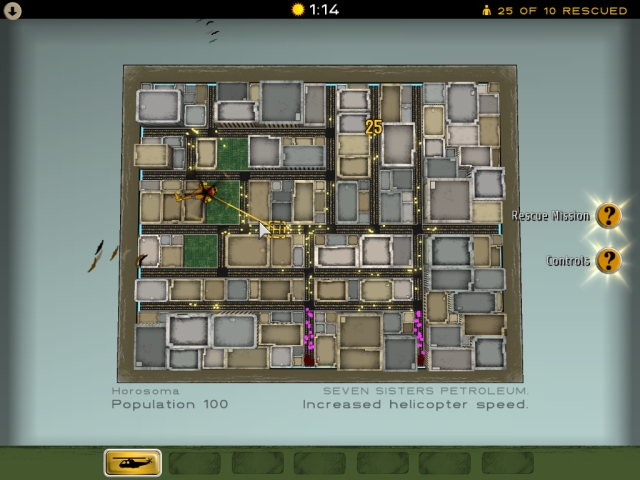 If you're eager to get up close and personal with the deceased, however, that's one thing AZS won't provide; the whole game takes place in an overhead view of each city, where you'll be instructing the movement of assault teams and issuing bombardments on selected spots. And no, your eyes aren't playing tricks on you, those squares crowding the streets in the above image are indeed depicting humans (yellow) and zombies (pink). If you've already made up your mind about not wanting to give this a shot based on these graphical "handicaps", then I really implore you to reconsider, as AZS is a compelling strategy title when you spend some time with it. This holds true even when you're on a losing streak, which is likely to happen on your first playthrough... unless you heavily modify the difficulty.

But why would you lose? The thing with AZS is that, even though the goal is to rescue civilians, the helicopter method, which is the first thing you're taught, is not the definitive method for attaining overall victory. Each level gives you a rescue number to reach, and when you accomplish this task and let the rest turn into mindless drones, all you've done is slow down the takeover of a territory, with a minimal score boost as your prize. Meanwhile, after the end of every level, or turn, to be more specific, the territories crawling with the living dead have their points added up, and the more territories they conquer, the more points will be collected, ultimately concluding with a faster triumph for the Zed army. So, if you really want to put these zombies in their place, you need to conquer these territories rather than scoop up a few survivors.

Gaining territories is much harder to pull off than helicopter runs, but it's also where the meat of AZS' real gameplay lies. Now, to capture a territory, you have to rid a city of all entering zombies. Simple-sounding procedure, but it has to be done before each level's night cycle, in which the undead enters the city through every entrance and in greater numbers. However, during the day cycle, these creatures only come in from select barricades, benefiting your cause to an extent, and thankfully, the game allows you to set up your "team" prior to the action. But even with these perks, you're still at an overwhelming disadvantage against Zed, and if you don't set up your equipment and troops carefully, the whole plan can fall apart within the first seconds of the fight.

Placement of your group, while a decidedly huge factor in annihilating the opposition, is only half the battle, as the actions you make during the actual conflict usually dictate how badly you want to succeed. Obviously that goes for every video game ever made, but the reason I said that is because AZS rarely never lets up on the chaos with its constant influx of zombie hordes. Decisions you make have to be instantaneous in most cases due to many tiny specifics that add up in the long run: artillery units take time to reload between shots, snipers slowly change positions when you want them to fire in a different location, timed charges are only useful once since they all go off at the same time, and assault teams can only run so fast to their next destination.

You also need to learn how to "crowd control", so to speak, because all it takes is a lone zombie to touch someone in a human gang, and in a millisecond, the whole group turns. So, even though you might try to avoid it early on, friendly fire is an inevitable action that must be incurred to the unfortunate few that wander too close to the crawlers. It burns to see them explode in a bloody mess by your own hands, but it's always rewarding in the end if you can capture the territory before nightfall. 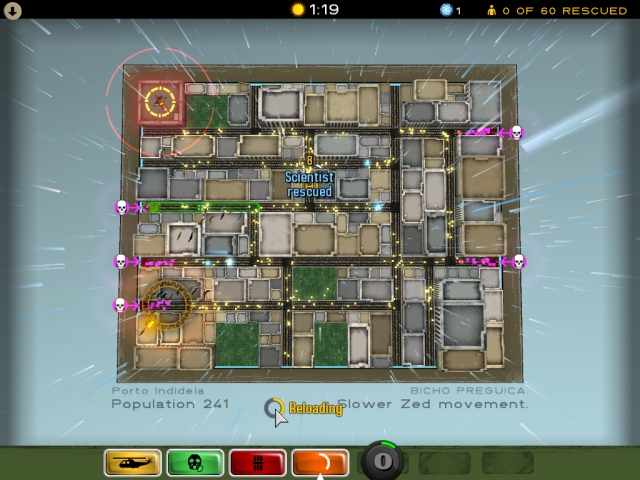 Honestly, I didn't think this game might be for me at first, that it might've been made with just strategy lovers in mind. But it grew on me, to the point where I sometimes played for two straight hours literally doing the same thing over and over again. Shoot, if someone were to take a glance while you play this, they would basically see you systematically clearing the screen of dots and wonder what the big deal is.

The reason it works is because of how well-designed the levels are, from entrance locations and placement of explosive buildings that can cause a domino effect, to the timed appearances of giant zombies and the short countdown to the night cycle. Everything is so tight and tense, that I have played many a level where a victory can be pulled off just as the timer hits zero on the day cycle. In fact, one time I refused to give up a territory, replaying it over and over for an hour, because I believed I could clear the area with only a second remaining. The flow is the complete opposite of other, longer strategy-type games that take awhile to set everything up and possibly grow stagnant. With AZS, it's like you're dealing with the climatic part of those games; you're in and out without investing up to 20 or so minutes just preparing an offense. The game has a flexible, pick-up-and-go mentality to it that anyone can get into.

AZS is also a great, modern day example of why people were able to, and still do, get into video games with "primitive" visuals. Gameplay is everything, and is why some titles still hold up today compared to others that only try to impress graphically; put a few years on the latter category, and there's a chance the visuals have lost their edge, and you're usually left with half a game. But give the gameplay some TLC, and you'll have a fun and captivating game to come back to unconditionally. Atom Zombie Smasher may have forsaken complex graphics for a simple style, but its mechanics are far from straightforward.

SPECIAL NOTE: if you purchase the game and get a sound error message when you start it, go to AZS' FAQ page and check Solution 5, since the link usually given in the error message no longer exists.
4/5

If you enjoyed this Atom Zombie Smasher review, you're encouraged to discuss it with the author and with other members of the site's community. If you don't already have an HonestGamers account, you can sign up for one in a snap. Thank you for reading!

© 1998-2020 HonestGamers
None of the material contained within this site may be reproduced in any conceivable fashion without permission from the author(s) of said material. This site is not sponsored or endorsed by Nintendo, Sega, Sony, Microsoft, or any other such party. Atom Zombie Smasher is a registered trademark of its copyright holder. This site makes no claim to Atom Zombie Smasher, its characters, screenshots, artwork, music, or any intellectual property contained within. Opinions expressed on this site do not necessarily represent the opinion of site staff or sponsors. Staff and freelance reviews are typically written based on time spent with a retail review copy or review key for the game that is provided by its publisher.