In one of Clock Tower 3's grisliest scenes, a young girl attempts to elude a sledgehammer-wielding maniac whilst confined in a room. Panicked, the girl stumbles about while the psychopath cuts loose a mighty swing and misses her by inches. She eventually manages to crawl away and presses her back against a door--her only egress. Although it would seem she is about to slink away, she fails to grasp the doorknob. In a final desperate act she spins around to face her would-be assassin with an arm outstretched, uttering a pathetic cry just before the brute takes another swing. With a sickening THUD!, his hammer connects with her forehead and the door gives way. She stumbles out of the room and makes eye contact with the game's protagonist Alyssa, just before collapsing dead on a staircase. The last we see of her corporeal body is her bloody face locked in a cold, dead stare.

Not long afterward is a cutscene that introduces Alyssa's socially awkward love interest Dennis. During the scene, Dennis raps on Alyssa's bedroom window and begs to be let in. Bear in mind that her room is on the second floor of her house. As she opens the window to let him in, he loses his grip and nearly plummets. Alyssa attempts to rescue him, but finds the task difficult because Dennis won't stop flailing his limbs. After she succeeds, he hands her a key that only her missing mother would possess. Pining for more information on her mother's whereabouts, Alyssa presses Dennis for more intel. Reluctant to give up any info, Dennis begins to awkwardly scramble away from Alyssa, eventually landing on her bed where he frantically rolls away from her. As if the scene wasn't ill-fitting or silly enough, he then executes a high speed crabwalk to escape Alyssa. What's even more unsettling about this scene is that the tone in Dennis's voice--which is even and casual--does not fit with his actions.

...and just like that, I was never able to find the game tense or frightening again. It wasn't just that one scene that ruined the experience, either. For every depiction of brutality, eerie environment, and creepy piece of backstory, there's a jarring moment of cartoony hilarity, a ridiculous plot device, or a laughable villain. Imagine if Silent Hill 2 had a scene where James threw a pie at Pyramid Head. That pretty much sums up Clock Tower 3's level of awkwardness, and it's such that it destroys what little tension the game attempts to build. 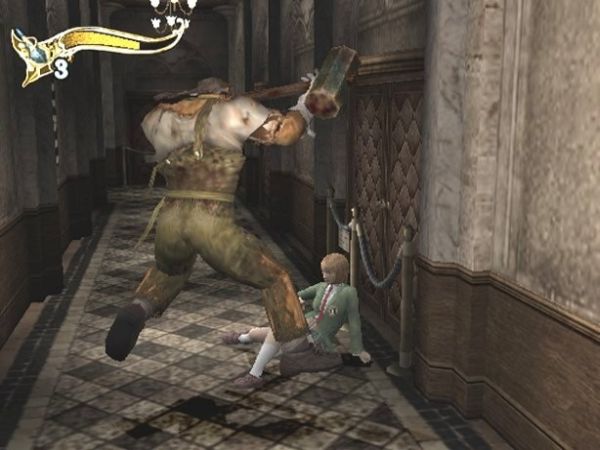 It could have done a fantastic job of that, too. Stages are fittingly claustrophobic, decked out with narrow hallways and tight catwalks that are perfect for housing the game's collection of murderous baddies. Each stage pits you against a different serial killer armed with a deadly weapon. If the killer spots you, which happens frequently, he'll give chase. You can escape the menace by locating a special hiding place or utilizing a specific piece of the environment that can temporarily incapacitate him. For instance, you can render the sledgehammer killer unconscious by nailing him with a particular violin. This will cause him to careen into a stack of stage props and boxes, which collapses and buries him.

Perish the thought of brandishing a weapon like a handgun or a lead pipe to knock out your opponent. Clock Tower 3's only weapon is a crystal jar full of holy water, which can temporarily stymie your foe. Unfortunately, this only provides a short reprieve from the hunt. Your assailant will recover, and he will catch up to you. That's when he launches an assault, and you'll feel its effect regardless of whether or not you dodge it. Even if his weapon doesn't make contact with your body, your panic meter will fill up. A full panic meter sends Alyssa into a state of hysteria, during which she will be nearly impossible to control. Worse, if your opponent lands a blow during that time, Alyssa dies.

Times like these should've brought out my despair and had me chewing my nails. Unfortunately, such wasn't the case...

The first two Clock Tower games (for SNES and PlayStation) featured a horrifically deformed antagonist named Scissorman. It wasn't only the massive pair of scissors he carried around that made him creepy, as the man's grotesque visage and his eagerness to kill both contributed greatly. He seldom made a peep beyond the occasional guttural grunt, and he wore a dingy outfit that he probably hadn't taken off since 1983. He was, in effect, an exemplary horror villain. Clock Tower 3, however, doesn't feature such foes. Here we have a collection of ridiculously dressed and garishly colored felons who gab incessantly in obnoxious voice. Rather than proper survival horror adversaries, they seem more like Scooby-Doo rejects. I'm sorry, but there's nothing scary about an "updated" rendition of Scissorman who looks like Kefka according to Cirque du Soleil, nor a man who appears to be donning a failed Cosplay of the antagonist from "My Bloody Valentine." 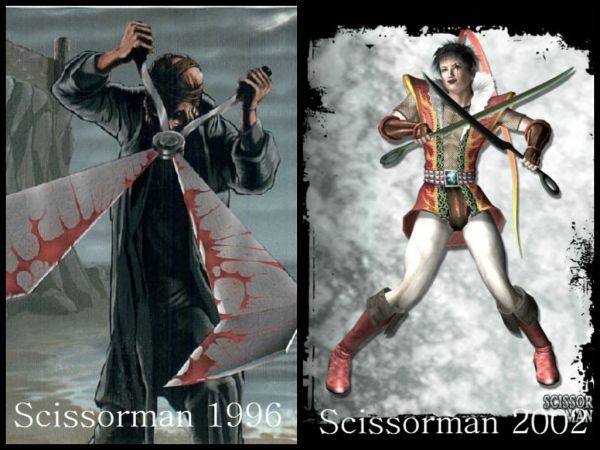 Fleeing from these misfits isn't terrifying in the least. Rather, pursuit scenes are annoying, especially when they occur every few minutes. Even when you've successfully given one of these guys the slip, they seem to find you before you can cover any ground. This needlessly draws out the process of exploring stages, especially since encountering a foe usually forces you to backtrack to an evasion point. Before long the stages overstay their welcome, and you might find yourself advancing the campaign just to be rid of the familiar environment.

Of course, you can't leave without fighting a boss. At each stage's climax, Alyssa's holy water jar converts into a magical bow that fires energy arrows. This may sound empowering, but don't expect to dance circles around your adversary while plucking off arrows like no one's business. Remember, this is a survival horror game! Instead of a sleek combat system, Clock Tower 3 dons a stilted one that requires you to charge up shots in order to deal a significant amount of damage. You can't move or aim while charging, so you have to hope while doing so that your enemy doesn't move out of your line of fire. Should a fully charged shot nail your opponent, an energy chain will form that confines him within a small area. After landing a certain number of chain shots, you can then pulverize him with a devastating special attack. 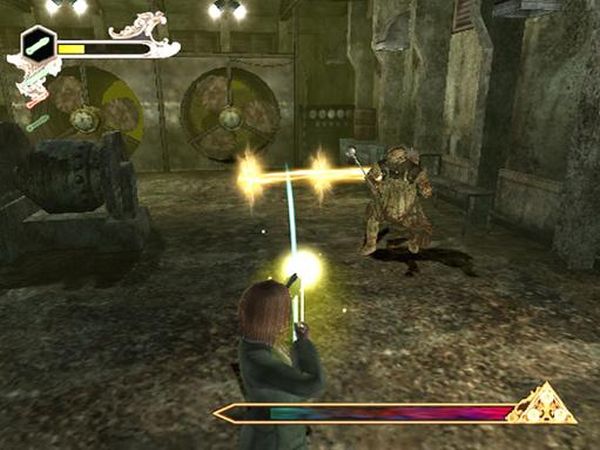 Unfortunately, the game's boss encounters suffer from all of the above flaws, and then some. For starters, it seems like the developers provided players with an underplayed combat system as a means to increase the scare factor during these scenes. However, the game isn't scary in the first place, so all we're left with is a painfully inadequate combat system. On top of that, bosses tend to have ridiculously long life bars. Unless you're able to score a special attack early on, you're in for a long haul when battling a boss. And when you consider how banal the combat system is, taking on a lengthy boss fight can grow horribly tiresome.

Clock Tower 3 seems to be Sunsoft's attempt to reinvigorate a franchise that had one foot in the grave. Sadly all this installment accomplished is kicking the other foot into the coffin, thereby burying the brand. What kills this game most of all is its unnecessary silliness combined with viciousness and brutality, resulting in an unstable mixture that few creative minds can utilize with success. Bottom line: unless your name is Peter Jackson or Joe Dante, you're better off keeping horror and silliness separate.
2.5/5

If you enjoyed this Clock Tower 3 review, you're encouraged to discuss it with the author and with other members of the site's community. If you don't already have an HonestGamers account, you can sign up for one in a snap. Thank you for reading!

© 1998-2020 HonestGamers
None of the material contained within this site may be reproduced in any conceivable fashion without permission from the author(s) of said material. This site is not sponsored or endorsed by Nintendo, Sega, Sony, Microsoft, or any other such party. Clock Tower 3 is a registered trademark of its copyright holder. This site makes no claim to Clock Tower 3, its characters, screenshots, artwork, music, or any intellectual property contained within. Opinions expressed on this site do not necessarily represent the opinion of site staff or sponsors. Staff and freelance reviews are typically written based on time spent with a retail review copy or review key for the game that is provided by its publisher.