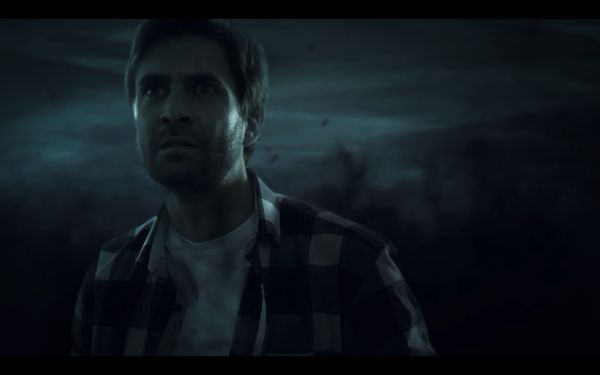 In case you're wondering, Alan Wake's American Nightmare is not a direct sequel to the game Alan Wake. Think of it as a side story or a bite-sized "what-if" game with the same core mechanics. As such, it plays exactly like its predecessor and bears virtually no learning curve for the initiated. This allows returning fans to get right into the campaign without having to suffer through a long, shaky tutorial.

The rules for defeating foes haven't changed a bit. You still have to shine your flashlight on the Taken (the franchise's main adversaries) to "weaken" them, and only then can you execute them with a variety of firearms. If American Nightmare surpasses its antecedent in any way, it's in the game's rogues gallery and arsenal. Joining the grisly ranks of the Taken are mutant spiders, anthropomorphic birds, and massive Taken that split into smaller, swifter versions of themselves. Thankfully, your choices when dealing with these creatures aren't limited to the original's paltry weapon selection. American Nightmare offers a substantial array of firearms, including a nailgun, a carbine rifle, a combat shotgun, and even a crossbow. Classic weapons like flash bangs and the flare gun also return for this installment, for players who loved them in the original game.

You'd think that American Nightmare would be a worthy follow up to Alan Wake, given the boost in enemy types and weaponry. Unfortunately, there was more to the original game than simply shooting foes. I wouldn't go so far as to say that Alan Wake was scary, but it had some fairly tense moments. Previously, Taken would approach you from all angles, surround you, and bludgeon you to death with little difficulty. Suffice to say, the game had a tendency to put a strain on your resources, as you chewed through bullets and flashlight batteries like crazy trying to deal with the Taken. At times, it felt like the original stacked the deck against you and stunted the play mechanics just enough to rob you of any delusions of grandeur. To top it all off, the Taken were all around strange, otherwordly, and incredibly malevolent foes. The combination of the Taken's strangeness and the original's astute survival principles made for a tense experience. 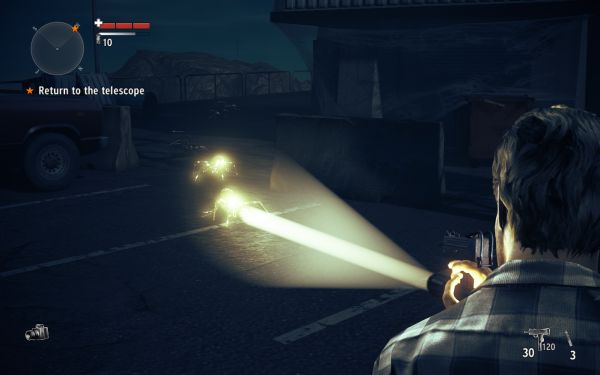 In contrast, American Nightmare seems to stack the deck against your opponents. In just the first stage, you obtain a submachine gun capable of annihilating the competition with ease. On top of that, ammunition is all over the place and tends to respawn in certain areas. For the most part, you have to actually try to run out of ammo. If you've played the first one, then you also know how important flashlight batteries are. Since the flashlight is in constant use, it doesn't take long to burn through batteries. Part of what created tension in the game's predecessor was running low on batteries and hoping you had enough juice to survive. American Nightmare, however, starts you off with ten batteries. To boot, you can find extras all over each stage, and the flashlight doesn't consume batteries as quickly as before. Seriously, I think I went through half of the campaign before I fully used up a single battery, and I never came close to spending my supply.

If you're well provided for in most horror games, then there's little to fear. American Nightmare loads you up with advantages and seldom leaves you high and dry. In a way, it's like the game eschews tension-based gameplay in favor of tighter action sequences. While there are a few segments made entertaining by the amount of gunplay involved, American Nightmare's combat is not especially great. In fact, it doesn't differ much from most contemporary shooters, the likes of which are in astonishing supply these days. In other words, American Nightmare is less of a creepy experience and more of a run-of-the-mill shooter.

I wish I could terminate my arguments here and say that the game is decent. Sadly, there are a few less than desirable design choices that further hamper the experience. 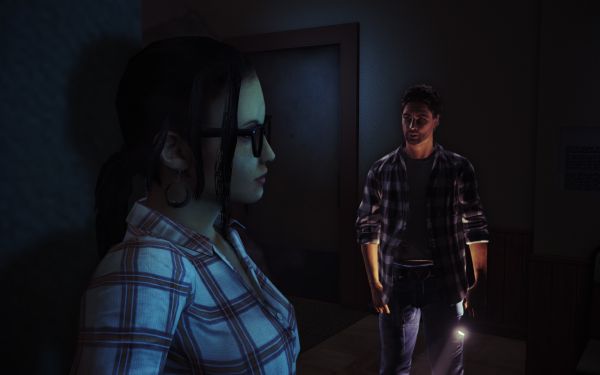 For starters, the game's narrative is not quite up to scratch. While I don't always judge games harshly based on poor storytelling, Alan Wake is supposed to be known for narrative that mimics the style of modern horror novelists like Stephen King, Dean Koontz, Jack Ketchum, and Bentley Little. While the script's voice still apes such material, the game's story is too disjointed and jarring to qualify. Part of that has to do with American Nightmare's premise, in which Alan leaps between three alternate dimensions where parts of his novels have come to life. Each setting has become a battleground where he faces the enigmatic darkness, having now assumed the form of an "Anti-Alan." However, the story plays out as Alan charging through loosely attached plot devices in an effort to kill the bad guy and rescue the his wife.

I'm not saying that the story is terrible, it's just average at best and missing the creativity of the original.

Stage designs also take a dive. Rather than fleshed out forests or convoluted locales, levels are little more than sizable arenas with three or four key locations. In and of themselves, they aren't poorly designed and are at least relatable. One stage, for instance, features a small motel positioned next to an oil platform and a diner in the middle of a desert. Beyond that, there's nothing much to the area but open fields and a few nooks and crannies that hold special weapons and hidden manuscript pages for obsessive collectors.

Honestly, I'm not necessarily an opponent of arena-like stages. American Nightmare's levels are at least large enough that they don't feel meager or overly cramped. Sadly, though, there are only three different maps to explore. What's worse is that you have to play through them three times apiece, for total of nine levels in the campaign. While I expected the game to be short (I was able to finish it in a mere three hours), I'm not a fan of a game rehashing stages to this extent. In a way, it cheapens the experience and leaves you feeling underwhelmed. "Oh, this again..." That's not something I want to say when playing any game, especially not a follow up to a game I loved. 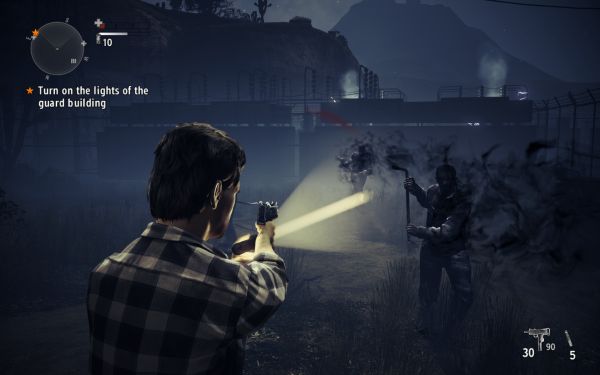 Personally, I don't like to think of Alan Wake's American Nightmare as a total flub. It's not a terrible game, it's just not a good one. Were there not so many shooters around these days, I might be able to give American Nightmare a bigger recommendation. Sadly, that's not the case. Still, I feel compelled to put a more positive spin on it. Rather than a mediocre side game, I like to think of American Nightmare as a message from Remedy to its fans. "We haven't forgotten about our dear friend Alan, and you haven't seen the last of him," the game seems to say. I certainly hope not...
2.5/5

If you enjoyed this Alan Wake's American Nightmare review, you're encouraged to discuss it with the author and with other members of the site's community. If you don't already have an HonestGamers account, you can sign up for one in a snap. Thank you for reading!

© 1998-2020 HonestGamers
None of the material contained within this site may be reproduced in any conceivable fashion without permission from the author(s) of said material. This site is not sponsored or endorsed by Nintendo, Sega, Sony, Microsoft, or any other such party. Alan Wake's American Nightmare is a registered trademark of its copyright holder. This site makes no claim to Alan Wake's American Nightmare, its characters, screenshots, artwork, music, or any intellectual property contained within. Opinions expressed on this site do not necessarily represent the opinion of site staff or sponsors. Staff and freelance reviews are typically written based on time spent with a retail review copy or review key for the game that is provided by its publisher.