When in doubt, clone a successful game.

I can only imagine that this was a credo for many Atari 2600 programmers, what with such a notion running rampant on the system. If you think about it, cloning can be wiser than attempting to reinvent the wheel for many Atari 2600 games. Mostly, this had to do with the 2600's obvious limitations, which were even apparent when the platform was relevant. The only downsides to aping popular titles were that said copies tended to lack an identity and sometimes offered less content than the original game did. There were even some that were skimpy in comparison to superior clones, as in the case of Alien.

Alien plays like Pac-Man. You guide the film's protagonist Ellen Ripley through a network of corridors as she smashes Xenomorph eggs (represented by dots). Occasionally you can snatch up a powered up dot, called a "pulsar," that allows you to annihilate foes by colliding with them. Your opponents this time around are not adorable ghosts with googly eyes, but crazed aliens that resemble shadow puppet monsters. Like the ghosts from Pac-Man, they roam freely about the screen and have a tendency to follow you as you approach them. In some unlucky circumstances, you could even aggro multiple Xenomorphs and become pincered. Unlike Packy, though, Ripley can cut loose a little heat from her flamethrower, which repels the aliens for a limited amount of time. Unfortunately, this weapon isn't very reliable and doesn't beat good old discretion.

There's plenty of potential for the same close shaves and desperate moments that make Pac-Man a great score attack title. Heck, the two games even share some mechanical similarities: speedy animation, solid play control, and a progressive climb in difficulty. At first, the game might even seem to be a viable replacement for Pac-Man, especially when you consideration how godawful the Atari 2600 adaptation of Pac-Man is. There's even a bonus stage similar to Frogger, where you must ascend to the top of the screen without becoming an alien's dinner. Regardless of how polished Alien may seem, though, you might find yourself growing tired of it before long, as I did. Bear in mind that I only play 2600 games for about five minutes at a time, usually as "palate cleansers" in between major projects. Even still, sessions with Alien grew wearisome, and I found myself reluctant to play the game when there were plenty of superior Pac-Man clones I could fire up.

My reluctance stems from the stagnancy of Alien's levels, as the game only sports one maze layout. The programmer tried to make up for this by occasionally shifting the rules that apply to the pulsars. For instance, pulsars only spawn one at a time instead of all at once in some levels. Other stages contain fewer pulsars all together. Sadly, the shift in pulsar rules doesn't add much to the experience. I still found myself going through the same motions, except with faster aliens and unreliable pulsars. 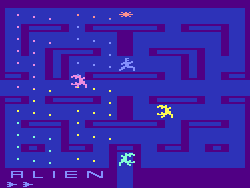 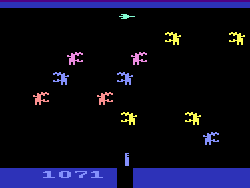 The only actual broken mechanism I noticed in Alien is Ripley's weapon, the flamethrower. Although the instruction manual says it's supposed to repel the aliens, it doesn't work most of the time. I've only noticed about one in every three foes turning tail when I launch an assault, but most of them seem to say, "That's cute," just before charging through the flaming tongue and ripping my stick figure Sigourney to shreds.

While Alien may not be a terrible score attack title, it is fairly dull and unimaginative. As I've said before, Atari 2600 games thrive on imagination since there's no room at all for a running narrative. Mostly, Alien is a passable Pac-Man clone that offers no reason to play it over superior takes on the concept. If you're an Atari 2600 enthusiast and you really want a good Packy experience, just stick with Ms. Pac-Man and don't bother with Alien.

...unless your only choices are limited to Alien or Atari 2600 Pac-Man. Then again, having a xenomorph burst from your chest is more entertaining than playing the latter game...
2.5/5

If you enjoyed this Alien review, you're encouraged to discuss it with the author and with other members of the site's community. If you don't already have an HonestGamers account, you can sign up for one in a snap. Thank you for reading!

© 1998-2020 HonestGamers
None of the material contained within this site may be reproduced in any conceivable fashion without permission from the author(s) of said material. This site is not sponsored or endorsed by Nintendo, Sega, Sony, Microsoft, or any other such party. Alien is a registered trademark of its copyright holder. This site makes no claim to Alien, its characters, screenshots, artwork, music, or any intellectual property contained within. Opinions expressed on this site do not necessarily represent the opinion of site staff or sponsors. Staff and freelance reviews are typically written based on time spent with a retail review copy or review key for the game that is provided by its publisher.