When I first glimpsed screenshots of Ghost Master, I wasn't impressed. Its presentation smacked of The Sims, except with ghostly phenomena. My prior experiences with Simsish games weren't pleasant. Heck, neither was my experience with The Sims, for that matter. What finally persuaded me to shell out a few bucks and download the Steam edition was its simple, tantalizing premise: command an army of specters and scare the hell out of innocent townsfolk. As a fan of haunted cinema, I couldn't pass up an opportunity like that.

I found Ghost Master's core concepts to be pretty uncomplicated. Each mission begins with a collection of ghosts, of which you must select a few to utilize in terrorizing unsuspecting citizens. You can achieve this by attaching your specters to "fetters," environmental objects that facilitate a ghost's manifestation. For instance, the spirit Raindancer can only be summoned through a "water" fetter. That would require the presence of an environmental stimulus related to water, like a puddle, a sink, or a toilet. Yes, you can even summon Raindancer while a victim takes a dump, if you so please.

Once bound to fetters, you can then command your phantasms to execute various abilities (called "powers") in order to frighten the locals, from conjuring thunder storms to poltergeist activity to setting the surrounding area ablaze. Of course, there are limitations on how many spirits can be present and what powers they can use, which is dictated by the amount of "plasm" you have. You begin each stage with seventy plasm, which you spend as you summon ghosts or command them to use powers. With successive scares, however, your plasm increases, allowing you to bind additional spirits and utilize more effective powers. If you're still finding yourself low on plasm, you can always dismiss spirits or downgrade their powers to get some plasm back. 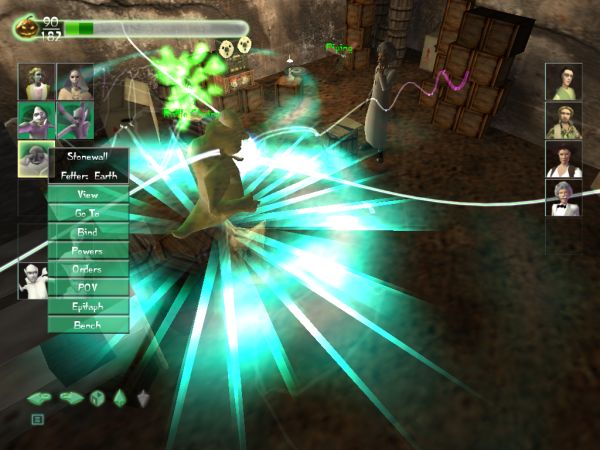 I will confess to enjoying the first few stages of Ghost Master. I loved watching the adversarial humans fly into a panic, and eventually flee the scene screaming. I especially dug toying with various ghosts to see how they work, and appreciated receiving money at the end of each stage for upgrading my spirits' powers.

While I was having fun with basic "scare everyone" stages, I knew that eventually repetitive frightening was going to grow old. Apparently so did the developers, which is likely why they created certain stages with special objectives. For instance, there's one mission that spoofs the movie "The Evil Dead." The object of the stage is to convince a group of college kids to read an ancient tome hidden in the cellar of a remote cabin. That requires you to reveal the entrance to the cellar, lure the students into it, and draw their attention to the book. None of these mini-objectives is obvious, and each requires a fair amount of tinkering and experimenting with various powers in certain areas.

To top it all off, the developers provided each stage with two to four unlockable ghosts to obtain. Like the specialty stages mentioned above, each specter has a different condition that it needs met before it joins you. Some of the prerequisites are simple, such as commanding an electrical ghost to zap a certain item. Others are more complex, and may require you to witness a few cutscenes and lure a particular character to a specific room. 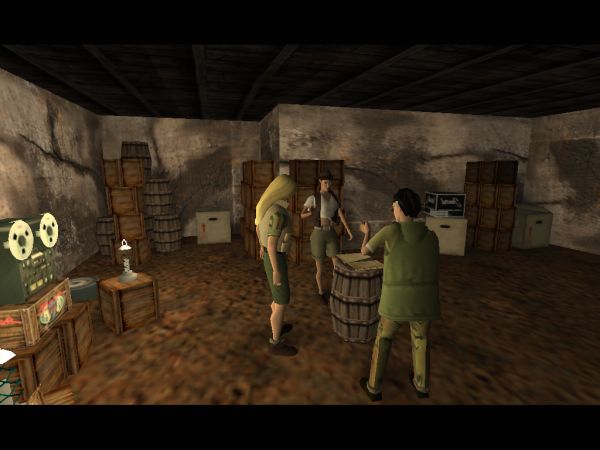 Sadly, even with the added features and specialty missions, Ghost Master still grows wearisome somewhere around stage seven. By that point, the simplest missions feel paper thin, and the most complex objectives serve only to irritate.

Scaring townsfolk isn't difficult, nor does it require much strategy. All you need to do is set a few ghosts, watch your plasm increase, set more ghosts, bump up their powers occasionally, and profit. Heck, I think I only spent about half of my time in all-out scare missions actually interacting with the game. The other half I devoted to staring at the screen and waiting for my opponents to flee. Call me crazy, but I don't find rudimentary power spamming and long moments of inactivity to be a proper test of anyone's strategic abilities.

Even still, I prefer the tedious nature of the game's simpler missions to its dull, frustrating special levels and ghost recruitment. Mainly, I dislike luring humans to certain areas. Many of the ghosts possess powers that will either attract humans to them or entice people to enter key locations. This works out sometimes, but I've found that most of the time the humans either overshoot the room I need them to enter or don't respond to the lure. Unfortunately, that means having to wait for the power to recharge before it can be used again.

Finding the right power for the job could take a bit of experimentation, which might require you to quit the mission and start afresh with different ghosts. Hell, you might even have to back to the Ghoul House and teach one of your specters a new trick or two. In other words, you could spend hours trying to figure objectives out. Honestly, something as simple as luring particular characters shouldn't demand more than a handful of minutes from you, and certainly not a couple of hours. I wouldn't harangue on this issue if it were only an occasional annoyance, but it crops up in just about every stage. 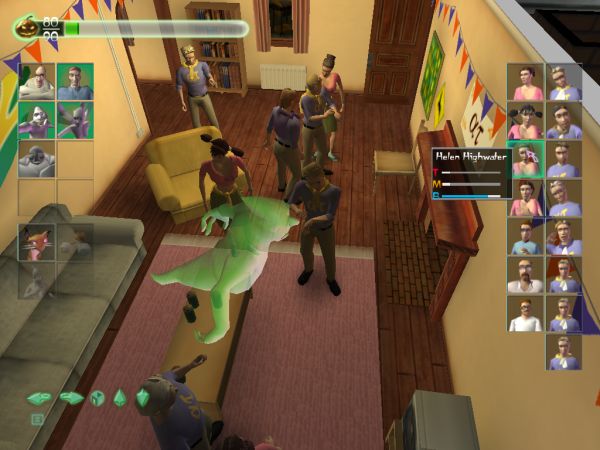 Thanks to freeing ghosts and completing special objectives, certain missions can take up to two hours. This is especially so if you're entering the stage blind and you realize partway through that you need a different entourage of phantasms. Worse yet, you cannot save or even suspend mid-mission. If you want to quit the game midway into a level, you have to exit the program and begin the mission anew later on.

I eventually hit a point where I said, "To hell with this game!" My sessions with it were long and exhausting, and only lightly peppered with entertainment. Unfortunately, I wasn't entertained enough to justify playing such a tedious, infuriating campaign to completion. I was sick of the incessant waiting, the lack of strategy, and the reliance I had to place on dumb opponents. Ghost Master may sport a neat idea, but it certainly doesn't pan out to an entertaining title, and that's a damn shame.
2/5

If you enjoyed this Ghost Master review, you're encouraged to discuss it with the author and with other members of the site's community. If you don't already have an HonestGamers account, you can sign up for one in a snap. Thank you for reading!

© 1998-2020 HonestGamers
None of the material contained within this site may be reproduced in any conceivable fashion without permission from the author(s) of said material. This site is not sponsored or endorsed by Nintendo, Sega, Sony, Microsoft, or any other such party. Ghost Master is a registered trademark of its copyright holder. This site makes no claim to Ghost Master, its characters, screenshots, artwork, music, or any intellectual property contained within. Opinions expressed on this site do not necessarily represent the opinion of site staff or sponsors. Staff and freelance reviews are typically written based on time spent with a retail review copy or review key for the game that is provided by its publisher.