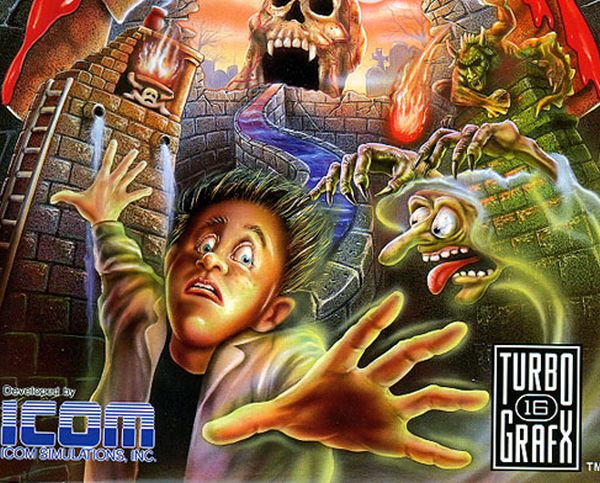 A familiar shadow has fallen over Anoraff. For high above the once peaceful community rests a stereotypical haunted mansion, a home to all manner of vile spirits, undead abominations, and stock enemies. One by one, villagers become appetizers for the manor's murderous denizens. The populace eventually grows so fed up with being munched that they enlist the help of a young hero, Arthur, to exorcise the mansion's fiends for good. But this hero isn't just some ordinary guy. He, uh.....

No, never mind, he is just some ordinary guy...

I don't like to be judgmental towards a video game based on its presentation or the appearance of its protagonist. I like to think that I give every game I play a fair shake and don't write it off simply because it looks stupid or overly cute. However, Ghost Manor's protagonist--a man who can best be described as the apparent lovechild of Dave Coulier and a Good Guy doll--looks so idiotic that I wouldn't fault anyone for quitting the game after he makes his grand appearance. Anyone who did so could count themselves among the lucky ones; for they wouldn't have to suffer through several stages of unadulterated annoyance as I have.

Unlike those who ran screaming, I stayed behind and attempted to tolerate an overlarge, 16-bit face that I would rather punch. With great effort, I was able to shift my attention away from Arthur's creepy mug and focus on enjoying the game. This required me to take a short break before delving into its campaign, mostly so I could desensitize myself to Arthur's dopey facial expressions. With my first major irk surmounted, I was able to engage in the age old platformer task of running toward the right.

Within mere seconds of the beginning the campaign, I stepped on a faulty brick and plummeted down an abandoned shaft. My only exit lay miles above me, accessed through a series of platforms, traps, and slipper slopes (of the literal variety). In most of my attempts to ascend the chasm, I landed on a slope and slid back down to the bottom. It didn't help my cause that the game's control response was just a touch too slippery, making precise leaps unnecessarily difficult to accomplish. Most of my jumps fell short or long of my target, usually resulting in a firm landing on a slope. After numerous failed attempts I was ready to rage quit the game, and I hadn't even finished the first stage. Stubborn man that I am, I decided to persevere instead. At last, I conquered the pit, traversed the overworld, and arrived at the exit.

...only to discover that it was locked, and that I needed to return to the pit to secure a key. 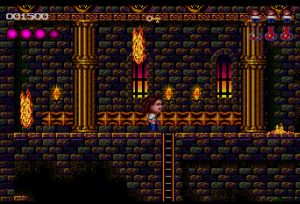 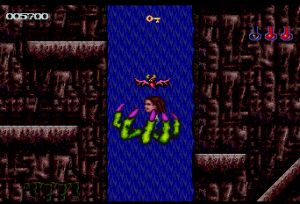 Nearly every stage in Ghost Manor requires a key to advance to the next one. Unlike most 2D platformers, the game's stages are not purely left-to-right romps to the finish, but consist of incessant wandering and occasionally slaying foes in an effort to snag said key. In a way, the game is like Little Nemo on NES, except that you only need one key and the stages are rife with irritating obstacles. Following stage one, you're not only assailed by slippery slopes, but must also negotiate a fair number of arbitrarily disappearing platforms, life-taking flames that appear to be background decoration, stock enemies that have a habit of knocking you off of platforms, and vast spaces that provide nothing--all in an attempt to find a key. Worse is when you invest a large chunk of time into mastering a particular locale's series of obstacles only to find that your reward is a lame power up instead of the key.

Those examples, however, pale in comparison to the annoyances experienced in later stages. For instance, level four takes you through a dilapidated wing of the manor. Here, various pieces of debris that appear to be part of the background are actually platforms, though it's damn near impossible to distinguish some from the scenery. Half of the time, I took a gamble as to whether or not I could stand on a particular wall pattern that I saw, and would leap through the air and hope for the best. I was wrong most of the time, and wound up falling off the screen and starting the segment over again.

In other cases, the opposite was true. I'd run afoul of a dead end, my only discovery being that of a sheer drop. I'd scour the surrounding area and find nothing, not realizing that a mundane piece of scenery hovering over the pitfall I took for a dead end was actually a platform all along.

Worse than that, I came across many scenes that required leaping from one minuscule platform to another, all the while struggling with the aforementioned control response issues. I also battled with numerous long waits for rising platforms to appear, not to mention rooms brimming with unavoidable enemies--and bear in mind that both ammo and continues are finite in this adventure--and a few surprise traps that sent me back a level or two. The worst was a chimney in the fourth stage that appeared to be a standard platform. I jumped onto the contraption, expecting to land normally and continue onward, only to fall through and reappear in stage three. 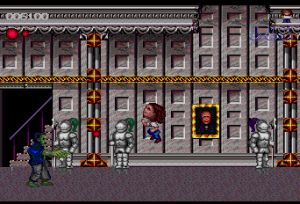 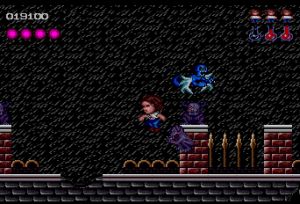 Nearly everything about Ghost Manor bespeaks of developer ICOM's attempt to annoy the living hell out of their audience. It isn't enough that the game, structure-wise, is a garden variety platformer at best, but the developers had to drop the ball ever so slightly on everything else. No, Ghost Manor is not a particularly broken platformer. It is, however, one that's overrun with enough minor technical and situational issues that it isn't an entertaining venture at all. All of that, though, could have been discerned by just taking one look at the game's protagonist. Would a super-deformed face as abominable as Arthur's ever appear in a worthwhile game? Signs point to no...
1.5/5

If you enjoyed this Ghost Manor review, you're encouraged to discuss it with the author and with other members of the site's community. If you don't already have an HonestGamers account, you can sign up for one in a snap. Thank you for reading!

© 1998-2020 HonestGamers
None of the material contained within this site may be reproduced in any conceivable fashion without permission from the author(s) of said material. This site is not sponsored or endorsed by Nintendo, Sega, Sony, Microsoft, or any other such party. Ghost Manor is a registered trademark of its copyright holder. This site makes no claim to Ghost Manor, its characters, screenshots, artwork, music, or any intellectual property contained within. Opinions expressed on this site do not necessarily represent the opinion of site staff or sponsors. Staff and freelance reviews are typically written based on time spent with a retail review copy or review key for the game that is provided by its publisher.