NOTE: I highly suggest not reading this review if you truly intend on playing Home, as it "spoils" aspects.

Sometimes all it takes is a single screenshot to convince me that a game might be worth playing, regardless of how little I actually know about it. Home had that particular impression on me when I saw the in-game interface, or lack of: most of the screen is grainy black, with the only light source coming from the character's flashlight, illuminating his immediate surroundings. While roaming around, alone in the dark, is nothing new for the genre, I was wondering how this particular title, with its cutesy, pixel art style could pull off a scare here and there. But when I booted up Home for the first time, I was a little worried when the game advised me to turn off the lights. It's hard to take something like that seriously, since it's kinda like starting a music game where it warns you not to mute the audio for maximum affect.

Beginning in a dark room, your nameless protagonist, who resembles an 8-bit Conan O'Brien, regains consciousness with absolutely no memory of what had happened. With flashlight in hand, the game gives you no clear-cut goal or idea of what to look out for, and you're left, defenseless, to navigate this ominous house in the middle of a stormy night. So, of course, the very first thing you stumble across is a bloodied, dead body just steps from the room you limped out from. With all kinds of thoughts racing through your mind, you continue to walk through this building with dread, your loud steps echoing through the halls, thunder crashing outside, and unsettling noises going off just outside your field of vision. The oldschool, Resident Evil method of traveling through doors and climbing down ladders won't help calm the nerves, either. 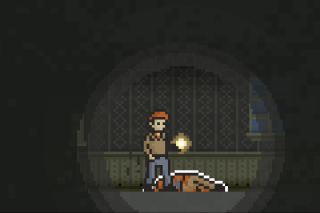 I was surprised. Surprised at how jittery I found myself playing the first 40-some minutes of Home, especially since the game pretty much uses a ton of cliches to startle me. I'm not afraid to admit that, during certain areas, I was playing with one hand on the controller and the other doing whatever it was trying to do to my face. The combination of being both a horror and mystery-style adventure title is what did the trick, and did so effectively; with every room, item, and hallway searched for clues, the tension continued to rise as I journeyed through these supposed isolated areas. Every now and then, I would read an implied warning on a wall, spot a torturous-looking device that, according to the text, was recently used, or hear a faint whisper or a scampering off in the distance. I was also stunned that the Xbox 360 controller I used actually rumbled along with certain moments!

As typical as it may be in approach, Home pulls off terrorizing the player within those 40 or so minutes with finesse that a lot of other horror games, usually of the high budget-variety, fail to do in their entirety. However, in its ambition to deliver a frightful experience, Home comes up short when actual gameplay comes to mind. I say that not because I expected this to function like a Resident Evil or a Silent Hill, but because I genuinely believe it could have been a better release had some things been modified.

While not noticeable at first, the game is strictly linear, forcing you down a certain path the whole time. There are sections that branch off sometimes, but you can still backtrack, and it's really rare that a door will prevent you from accessing previous locations. If you treat this like a usual adventure or RPG release, then you're not going to leave any stone unturned, and you'll likely uncover 99% of the content on your first playthrough. Home is not really sophisticated about it either, presenting objects and "challenges" to your character in plain sight; adventure-lite, so to say. Need to drain some water? Well, keep walking to your right to consecutively find all valve handles! I just wish there would've been more thought put into this aspect of the game.

But my biggest issue with Home is that the uneasy feeling you get during the first half pretty much gets scaled down when you piece together the plot towards the midway point. From here, it pretty much stops trying to spook you in an attempt to tell a story. I wasn't happy about this, but I was curious how Home would conclude, and that's where it gets bumpy. 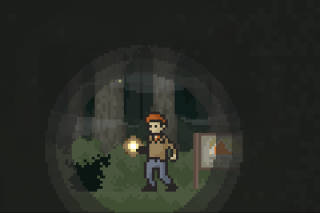 While you kinda get where it's leading, the game intentionally leaves enough gaps in the plot to pull off a lame "Choose Your Own Adventure" type thing towards the end. There's going to be moments that present Yes/No questions, and you can pick whichever, because Home will just go along, reshaping the ending. It honestly feels more condescending than unique, like you're a five year old being talked down by an adult: "Surrrrrrrre, buddy! If that's what you wanna believe in!!" And it's not like in other titles where you get all the facts first before you make these decisions, as you're literally forced to mold the climax based on how little you know. I understand. I understand it was made this way to function around individual players' fears and assumptions, to approach the evidence like a detective on a case, but the shallow method in which the design presents them doesn't make it click for this game.

Some will consider this a good excuse to replay the game for different outcomes, but considering these "defining" instances occur mostly at the end (you can choose to overlook items along the way, but games in general do this), it's hard to convince yourself to wade through an hour, hour and a half for a Twilight Zone alternative ending. I don't take back what I said about the game being creepy in its opening act, but Home's shortcomings extinguishes any magic it could've had as a whole.
2.5/5

If you enjoyed this Home review, you're encouraged to discuss it with the author and with other members of the site's community. If you don't already have an HonestGamers account, you can sign up for one in a snap. Thank you for reading!

© 1998-2020 HonestGamers
None of the material contained within this site may be reproduced in any conceivable fashion without permission from the author(s) of said material. This site is not sponsored or endorsed by Nintendo, Sega, Sony, Microsoft, or any other such party. Home is a registered trademark of its copyright holder. This site makes no claim to Home, its characters, screenshots, artwork, music, or any intellectual property contained within. Opinions expressed on this site do not necessarily represent the opinion of site staff or sponsors. Staff and freelance reviews are typically written based on time spent with a retail review copy or review key for the game that is provided by its publisher.