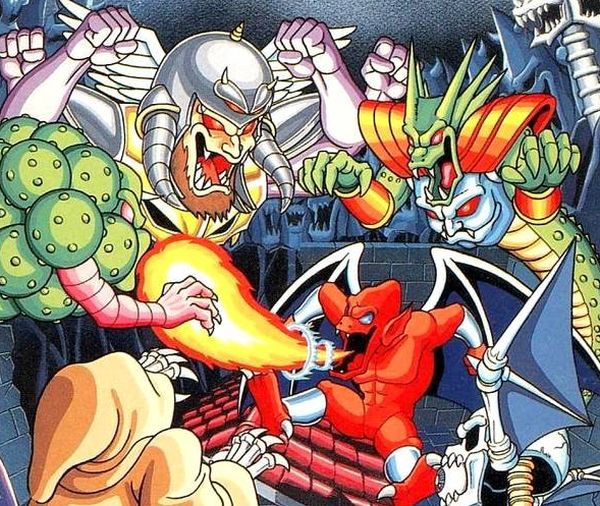 The Ghoul Realm, like any other video game world, couldn't know peace forever. As with many 8- and 16-bit villains before and after him, Lord Breager refused to stay dead. Shedding a magnificent "dark light" across the land, he once again brought down the Ghoul Realm's rulers and stole his way into power. Breager had to have known, though, that there was one antihero who wouldn't stand for this: the winged warrior Firebrand.

As you can tell by its premise, few of Gargoyle's Quest II's details differ from its predecessor. The game's core mechanics and various gameplay phases (sidescrolling platformer and overhead RPG-like exploration) are similar to the original. To boot, the rugged challenge from the previous installment is also firmly in place. Some folks might call for Capcom's blood over their reluctance to evolve the Red Arremer franchise this time around, but I personally welcome the familiar trappings that this edition brings.

That's not to say that everything familiar about Gargoyle's Quest II is so great, especially since my least favorite part from the original game makes a return. As before, I'm not fond of the game's quasi-RPG presentation, which apes titles like Dragon Warrior and Final Fantasy. Mainly, it's because these interludes feel more like interruptions than fanciful additions or features used to spruce up the gameplay. Thankfully, Gargoyle's Quest II nixes the random encounters that plagued the original, so the RPG-like presentation is less unwelcome this time around, and is actually quite tolerable. 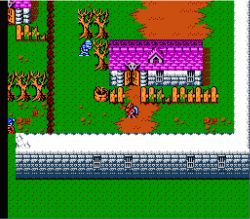 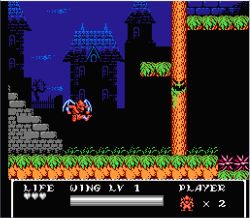 I can stomach the return of the faux role-playing elements. What really bugs me about this title is the backtracking that comes with losing all of your lives. You see, there are points in the campaign where you have to complete a couple of stages before accessing the next checkpoint (which is where you obtain a password). Should your game end before reaching the next respawn location, you'll have to take the entire sequence from the top. That usually means having to replay an entire stage you've already conquered in order to reach the current storyline level. Suffice to say, it grows tiresome quickly.

Thankfully, that's only a small setback. The rest of Gargoyle's Quest II is just as awesome as its portable antecedent.

Heck, in some ways Gargoyle's Quest II surpasses its predecessor. For instance, it's more visually appealing. To be fair, just about anything on NES is more pleasant to look at than its Game Boy counterpart, mainly thanks to the presence of actual color palettes. Just the same, it's great to see a Red Arremer game in full gloomy color. Areas are much darker and appear more forbidding than before. There's a forest stage, for example, that feels as though you're delving deeper into a tenebrous and haunted, yet lush and flourishing, land. The graphics become more dismal as you venture further, and eventually you might get the feeling that escape from this territory has become quite uncertain. It gladdens me to see that Capcom didn't squander the opportunity to take full advantage of the NES's graphical capabilities, especially considering the atmosphere they can create.

In addition to masterful coloration, stages are wonderfully designed. Many of them take into account Firebrand's capabilities, in particular his ability to temporarily float through the air by flapping his wings. This allows him to close lengthy fissures and access tight locations that ordinary jumps wouldn't be able to manage. On top of that, the fiend can cling to rocky surfaces using his piercing talons. However, it's not the abilities themselves that make the stage designs special. Capcom wisely crafted convoluted levels brimming with instances that engage each of Firebrand's talents, and sometimes all of the above in awkward sequences. It's not uncommon to discover locales that might require you to fly a short ways, drop down into a gap, cling to a moving platform, blast an impeding enemy, and then fly some more.

Ordinarily, I'd segue into praising the game's tight mechanics here. However, there's one teeny snag in that regard: the game's jumping physics. Unlike before, Firebrand's leap feels peculiar. He ascends more slowly, and seems to spring upward at an awkward arc when leaping forward. It's not so bad that you couldn't possibly achieve acclimation, but when you've been conditioned to the Game Boy installment's physics, it can be difficult to adapt to the NES's version's unique mechanics.

At the same time, I'm actually thankful that this game sports divergent mechanics from its predecessor. In a way, it's like the developers' means of setting this game apart from its older brother. That's appreciable, as it ensures that you won't feel like you're just playing the original game with new levels and improved visuals. 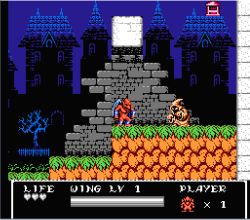 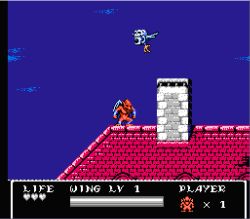 If there's anything else I feel I need to gush over before ending this review, it's game's wild collection of bosses. The rogues in this edition's gallery aren't particularly great looking, but they are menacing to tangle with. For starters, there's the Sand Frog. Though his name doesn't sound very imposing, he's quite a doozy of a boss. Not only does the creature fire a quartet of deadly spores, but also either rockets towards you, a la E. Honda, or bounds through the air in tight arcs. Worse, you'll also have to contend with shifting sand, which threatens to either drag you into nearby spikes or throw off your timing when dodging this opponent. One war that nearly drove my blood pressure through the roof involved tackling a doppelganger. That he could rob my appearance wasn't all that problematic. What really drove me nuts about this guy was that he could fly through the air at insane speeds. If there's one thing Firebrand isn't, it's a speed demon. Dodging this guy seemed impossible because of that, but I eventually learned to use his flight pattern and the angling he utilized against him, eventually devising a foolproof method for crushing him once and for all.

All in all, Gargoyle's Quest II doesn't expand upon its predecessor's premise. That's fine, really, as it at least does the previous game's core concepts justice. I'm not completely sure about this game's sales numbers, I believe they were less than what Capcom expected. The game was sadly overlooked, and I think that's what eventually led to the side franchise's downfall. Thankfully, Capcom would give us one more title that would turn up the series' visual splendor and go balls out in terms of vicious visuals and monstrous themes. All the same, I really wish that Gargoyle's Quest II had been a financial success. Maybe then Firebrand might have garnered more widespread recognition.
4/5

If you enjoyed this Gargoyle's Quest II review, you're encouraged to discuss it with the author and with other members of the site's community. If you don't already have an HonestGamers account, you can sign up for one in a snap. Thank you for reading!

© 1998-2020 HonestGamers
None of the material contained within this site may be reproduced in any conceivable fashion without permission from the author(s) of said material. This site is not sponsored or endorsed by Nintendo, Sega, Sony, Microsoft, or any other such party. Gargoyle's Quest II is a registered trademark of its copyright holder. This site makes no claim to Gargoyle's Quest II, its characters, screenshots, artwork, music, or any intellectual property contained within. Opinions expressed on this site do not necessarily represent the opinion of site staff or sponsors. Staff and freelance reviews are typically written based on time spent with a retail review copy or review key for the game that is provided by its publisher.