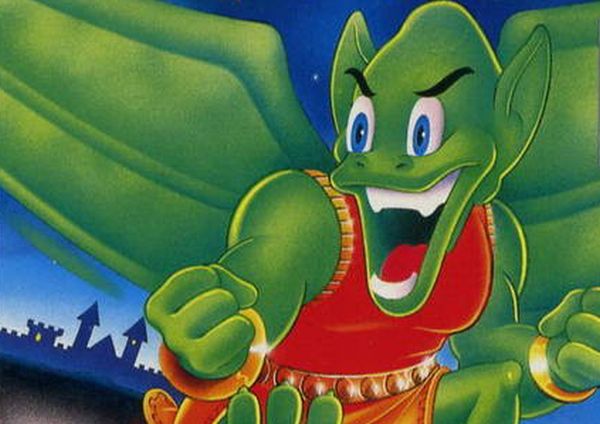 The demon lord Breager awoke after centuries of death-like slumber. Upon revival, Breager commenced usurping power from rulers all across his home dimension, the Ghoul Realm. One might not expect that this alternate universe, which is home to many of the villains found in the Ghost 'n Goblins franchise, would be in need of a hero. Thanks to its dearth of humans, the realm was without armored knights like Arthur and Maximo to save the day, and was instead forced to rely on one of its demonic natives.

Enter Firebrand: a member of the gargoyle-like Red Arremer tribe. When the last glimmer of hope faded from his hellish homeworld, Firebrand stepped up to the plate to challenge Breager and his cronies. Although Breager has seemingly unlimited power and an army of goons, Firebrand has projectile breath, powerful wings, and razor-sharp talons for clinging to sheer cliff walls. In the world of video games, such awesome powers are more than enough for any individual to deal with an army. Worst of all, Firebrand has the power of annoyance on his side. Any players who met Firebrand's ilk in the game Ghosts 'N Goblins might remember them specifically as "those irritating winged monsters that fly around all over the place, take forever to kill, and always cause you to lose a life." In the arcades of yore, we tended to accuse the Red Arremers of quarter theft.

Gargoyle's Quest defied narrative convention by allowing you to play as, and even sympathize with, the enemy. If you detested the Red Arremers from Ghouls 'N Ghosts, then playing this game might give you a horrible, dirty feeling like you've betrayed all that is righteous. Thankfully, the game works wonders towards developing Firebrand into a likeable antihero and his world into a place to actually care about. Characters seem to perk up when they meet Firebrand, and subjugated rulers regard him as either a beacon of hope or a respected warrior. NPCs are more than willing to aid Firebrand on his quest by not only providing encouragement, but clues as to where the beast should head next. More than anything, though, speaking to townsfolk reveals that the Ghoul Realm--a place once believed inherently sinister--is actually precious to scores of sentient beings. You wouldn't think that so many fiendish monsters would show human-like passion for anything, even their own home. In a way, traveling through the Ghoul Realm humanizes those who are the furthest from human.

Defying convention doesn't stop at the game's simple narrative, though. Capcom had to go a little further along the line of defiance by fusing together two very divergent genres. Although you can comfortably categorize Gargoyle's Quest's action sequences under the 2D platformer umbrella, the sequences leading up to the action are more akin to console-style RPGs of the late '80s and early '90s. The presentation of these sequences mirrors that of Dragon Warrior, where you guide a super-deformed Firebrand sprite through the Ghoul Realm. You can visit villages and gather intel or cruise the Ghoul Realm's world map and engage in random encounters. Unlike actual RPGs, random encounters don't thrust you into turn-based battles, but plunge into sidescrolling mini-stages populated by Breager's troops. Victory, unfortunately, doesn't lead to experience and leveling up, but it does net you a few vials (read: money) that you can exchange for extra lives while visiting villages.

Although the quasi-RPG elements are neat, they detract somewhat from the Gargoyle's Quest experience. Most of the time, I felt antsy when traveling from one platformer stage to another. Worse, when you lose all of your lives in a level, you respawn at the last village that gave you a password. In order to return to the level that killed you, you usually have to cover a fair-sized expanse of land, fight off random encounters, and sometimes revisit an entire stage. It's not uncommon to play two or three stages in between passwords.

Most of my above complaints are pet peeves, though. They didn't detract so much from the experience that I was incapable of enjoying its well built platformer stages, the game's real attraction. Gargoyle's Quest sports a most favorable setup for fans of the genre, in particular its combination of sound mechanics and intricate level design. The game's control response is also spot on, eliminating any instances in which you might feel obligated to blame the game for your mishaps.

With its masterfully programmed physics, you're expected to guide Firebrand through several grinders of spike-lined walls, ghost-infested hollows, and tight tunnels brimming with nasty little traps, not to mention a plethora of wide gaps to close. In order to overcome such obstacles, you have to tap the 'jump' button while airborne, which allows Firebrand to float for a short amount of time. Another ability allows him to cling to walls and leap off of them. That might smack of Ninja Gaiden, but the mechanics behind it are much more stable. As it turns out, Firebrand can climb walls much more deftly than Ryu.

Don't be surprised, either, when certain scenes require you to leap from a wall, float across a ravine, dip further down into a pit, and resume flight into a tunnel that was once below you. Situations in Gargoyle's Quest commonly require complex actions, and usually demand that you utilize your gray matter and timing skills to surmount them.

To cap each killer stage, Gargoyle's Quest stars a fairly menacing cast of bosses. For instance, one battle pits you against the skull-headed, many-winged Bellzemos. Between lobbing shots at you, this guy breaks apart into a swarm of impervious bees, only to reform when he's just about next to you. Other such contests pair you off against a flying fish composed of incongruous body parts and an undead arthropod with humanoid components called Zakkaudruzer. These were mostly challenging fights against gruesome beasts where one misstep usually led to a hefty amount of damage. Best of all, they were fiends worthy of being showcased in the Ghosts franchise.

I very much appreciate Gargoyle's Quest. Maybe it didn't goes balls out in defying conventions, but it did so in a very tasteful way. Most of all, I'm pleased that the developers didn't focus overmuch on the game's pseudo-RPG elements. They knew well enough to remain focused on action elements and keep the game challenging and exciting via intricate platforming. It's sad, though, that Capcom pulled the plug on this side series after only three entries. I would definitely be up for another Gargoyle/Demon game, but I honestly don't see that as happening any time soon.
4/5

If you enjoyed this Gargoyle's Quest review, you're encouraged to discuss it with the author and with other members of the site's community. If you don't already have an HonestGamers account, you can sign up for one in a snap. Thank you for reading!

© 1998-2020 HonestGamers
None of the material contained within this site may be reproduced in any conceivable fashion without permission from the author(s) of said material. This site is not sponsored or endorsed by Nintendo, Sega, Sony, Microsoft, or any other such party. Gargoyle's Quest is a registered trademark of its copyright holder. This site makes no claim to Gargoyle's Quest, its characters, screenshots, artwork, music, or any intellectual property contained within. Opinions expressed on this site do not necessarily represent the opinion of site staff or sponsors. Staff and freelance reviews are typically written based on time spent with a retail review copy or review key for the game that is provided by its publisher.