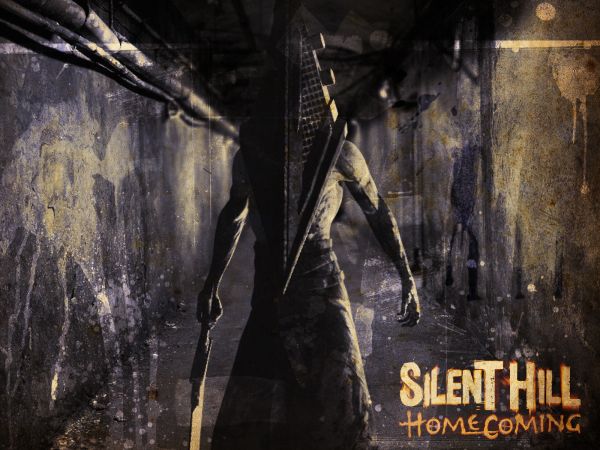 Konami at one point must've felt that Silent Hill was due for a reinvention of Resident Evil 4 proportions. So they tossed a project at developer Double Helix and said, "Conjure up a modern nightmare." Thus Silent Hill: Homecoming was born, swaddled in allegedly fresh concepts and contemporary visuals. This newborn babe promised to usher the franchise into a new era and fill my mind with enough nightmare fuel to impede sleep for a few months.

Unfortunately, Homecoming's hype turned to be a dream, as the game itself proved to be a action-horror title awkwardly stuck between two worlds.

Not everything Homecoming has to showcase is a flub, though. The visuals, for instance, are befitting of a Silent Hill title. Double Helix managed to create a world constructed of dingy details and pervasive darkness. Your flashlight emits only a faint beam in this installment, allowing you to illuminate only a tiny sliver of the environment before you. Homecoming is host to some incredibly tenebrous locations, including a disheveled mental institution and an abandoned church. Standing amidst a thick blanket of blackness with a dilapidated building as your backdrop doesn't exactly inspire comfort. In fact, it might set your mind on a paranoid tangent regarding what could be waiting for you inside the pitch black void. Not all of the game's stages are plunged in absolute darkness, though. Even without total blackness, some stages like the shadowy sewers and eerie cemetery are darkly splendid. I couldn't help but feel as I explored these hellish locales that something was going to crawl out from behind a desk or tombstone, nosh on my innards, and use my tibia for a toothpick. 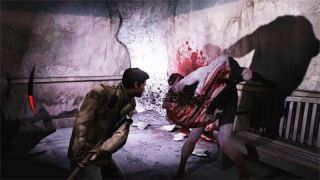 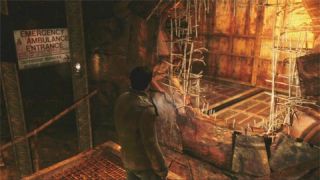 Even Homecoming's menagerie of demonic beasts are as horrific as ever. Many of the creatures aren't merely deformed animals--though you do have some hideous dogs and enormous roaches in this chapter. Rather, there are monstrosities like Needlers, which are blade-armed, crab-walking anthropomorphs with heads on their posteriors. Joining them are monstrous Siams, club-armed giants with feminine body parts sticking out of their backs. Worse yet are the annoying Schisms, guillotine-headed demons with long necks for superb striking range. Each monster is so simultaneously terrible and wondrous to look upon that one might consider hitting the web to find action figures of them. Unfortunately, that requires giving a crap about the rest of the game...

Previous Silent Hill games didn't feature too many finely detailed devils like these, but I think there was a reason for that. For the most part, you wouldn't take the time to gaze in awe at the horrifying visages in early titles. Rather, it was more to your advantage to run like hell and not analyze the hell-beasts that were obviously hungry for your flesh. That being the case, it didn't make sense to craft so many visually complex creatures previous to this game. Obviously, it would be a waste for Double Helix to include such richly detailed adversaries, only to have players evade them and seldom stop to admire the craftsmanship put into them. Thankfully for Homecoming's enemy designers, the game is so painfully overburdened with combat that players have no choice but to stop and fawn over the game's cast of abominations.

Enemy placement in Homecoming is quite different than in its predecessors. You don't usually enter a room or hallway to find foes loitering about, but mostly bump into preset encounters. For instance, you might run past a hole in the wall of an empty corridor, only to inadvertently prompt a Needler to crawl out of that hole. Unlike previous Silent Hill installments, you don't have the luxury of taking flight and leaving your opponent in the dust. Most of the time you're forced to fight and defeat your opponent, lest you leave yourself susceptible to a series of cheap shots. For example, if you stumble upon a dog (called a 'Feral') on the street and attempt to retreat, the beast will charge after you, effortlessly catch up to you, and then tackle you. In other words, you have no choice but to fight it. This, of course, tarnishes the game's survival aspect and leaves Homecoming feeling more like a straight up action title. 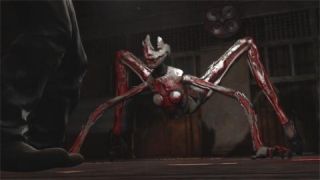 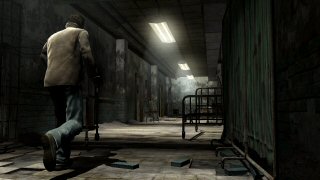 I'm okay with that, actually. I like straightforward action titles, especially horror-themed ones. Perhaps I should reiterate the major issue that I have with Homecoming: I like good action games, something that Homecoming is not.

Part of the problem with Homecoming's combat is that most of the stages feature closed in spaces that would be perfect for survival-horror games, but terrible for action titles. Mostly, this is because it's difficult to maneuver around your opponents when you're practically shoulder-to-shoulder with them in narrow hallways or dinky rooms. I recall one scene in which I had to fight three Schisms in a police station corridor, and didn't have nearly enough space to mess with them. After several deaths, the gods of gaming finally decided to allow enough of my dodge attempts register properly, allowing me to withstand the Schisms' onslaught long enough to fell all three of them.

As if you couldn't tell, dodging is paramount in Homecoming. Defeating most enemies is a matter of timing the dodge button properly and hoping that the game registered your dodge attempt. Following a successful dodge, you can then lay into your opponent with a melee combo. Unfortunately, successful dodges are not always as easy to come by as they seem. At times, I've pressed the dodge button only to see Alex, the protagonist, stand there and accept his adversary's blow. Worse than that were the occasions when Alex would lunge toward the enemy instead of dodging its attack, essentially negating my dodge attempt. Since I tend to be frugal with healing items in survival horror games, I died a lot.

It seems like Homecoming suffers from an identity crisis. It doesn't know if it wants to be a survival horror game or an action title, and instead attempts to be both. Yes, Resident Evil 4 and Dead Space attempted this, and both absolutely nailed it. Mainly, that was due to their ability to maintain solid action while creating tension. The combat mechanics in both games were slick, but they were just slow enough that foes could get the upper hand on you if you weren't careful. In contrast, Homecoming's combat isn't very slick. It's clunky and flawed like a survival horror game ought to be, but combat is often forced upon you like an ordinary action game. Because of that, the game is far too frustrating to be tense, plus the constant stopping to engage in clumsy combat mechanics kills the game's pacing.

I'm not at all against seeing my favorite brands experiment with new gameplay features or dabble in different genres. Hell, you could make a Silent Hill racing game for all I care. As long as it's a good racing title, I'll be pleased. What matters is that developers consider whether or not certain innovations will sit well with franchise standards and tropes that they desire to leave intact. In this case, deeper action mechanics and Silent Hill's clumsy combat system just don't mix.
2/5

If you enjoyed this Silent Hill: Homecoming review, you're encouraged to discuss it with the author and with other members of the site's community. If you don't already have an HonestGamers account, you can sign up for one in a snap. Thank you for reading!

© 1998-2020 HonestGamers
None of the material contained within this site may be reproduced in any conceivable fashion without permission from the author(s) of said material. This site is not sponsored or endorsed by Nintendo, Sega, Sony, Microsoft, or any other such party. Silent Hill: Homecoming is a registered trademark of its copyright holder. This site makes no claim to Silent Hill: Homecoming, its characters, screenshots, artwork, music, or any intellectual property contained within. Opinions expressed on this site do not necessarily represent the opinion of site staff or sponsors. Staff and freelance reviews are typically written based on time spent with a retail review copy or review key for the game that is provided by its publisher.