After playing the first four Silent Hill games, the franchise's prognosis seemed grim. Silent Hill 3, despite the love it initially garnered from most fans, proved to be a more tedious and linear venture than it should have been. Only in the latter half did it truly pick up and engage me. Its sequel, Silent Hill 4: The Room, nearly shattered my interest in the brand. Regardless of the shadow that the title had cast on the series, I decided to give Silent Hill the benefit of the doubt and play the next game in line, Silent Hill: Origins, anyway. So I fired up my PSP and braced for disappointment, fully expecting the franchise's downward spiral to continue in full force.

...only to find that Origins revived the hope I once held for the Silent Hill name.

I'm not saying it's a perfect game, but it is a fantastic return to form for the series. It starts off with a basic protagonist, Travis Grady, whose rig breaks down outside of the titular ghost town. There he discovers a burning building, occupied only by a singed girl named Alessa. Following a daring rescue, Travis finds himself plunged in a familiar mist, surrounded by unpopulated buildings that provide no sanctuary from the shambling shapes stalking the streets.

I was worried that the game's story would revolve overmuch around Alessa. I've grown tired of seeing her used as a narrative focal point, mostly because she's old hat. Thankfully, Origins only touches on Alessa intermittently, and is instead more intent on developing Travis and his backstory. In particular the story delves into Travis's relationship with his peculiar parents, his mother having been committed to an institution and his father unable to cope with the collapse of his immediate family. 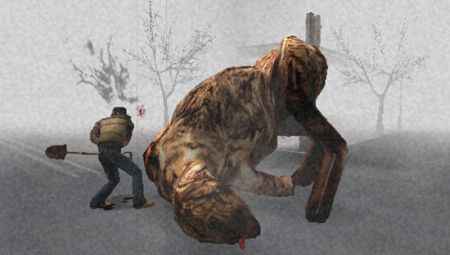 Travis's development is not without reward. Discovering what he went through as a child brings out his human qualities, allowing players like myself to actually give a damn about his survival. The typical expectation for someone who's experienced what Travis has might involve years of therapy and a tattered existence, peppered by copious amounts of hedonism, apathy, and self-destruction. Yet here's a man who so values life that he'll burst into a burning building to save a young girl. Regardless of the fact he found her scorched from head to toe, he still attempted to liberate her from the inferno. Unlike some of the series' previous protagonists, this man is a hero in the truest sense, and yet still very much an average citizen rather than a combat-ready commando.

Anyone who's played the first two Silent Hill games should know what to expect from Origins. As Travis, you traverse the misty streets in search of provisions (healing items, ammunition, melee weapons, etc.) whilst avoiding/fighting hideous creatures. Your main objective, though, is to seek out a locale of interest and uncover clues that will likely send you to another building to repeat the process.

Although Origins features a familiar premise, several of the details have changed. I know, that horrible 'c' word usually doesn't bode well for Silent Hill titles. Unlike the previous two games, though, the modifications made in Origins are actually sensible and add to the experience. For starters, there are melee weapons everywhere. At times, it seems like you can't walk down a hallway without tripping over a hammer, a two-by-four, a police baton, or even a spear. Heck, even IV drip poles, televisions, and toolboxes have become deadly weapons. Although melee weapons are abundant, they're all breakable. After a handful of blows, even katanas shatter. Thankfully, weaponry is so ever-present that you'll rarely have to fret about running low on bashing instruments. 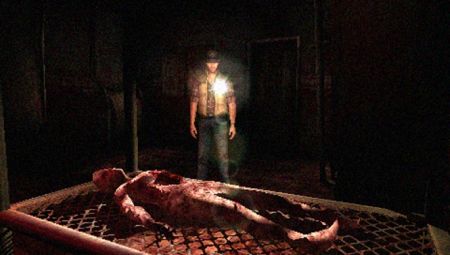 You'll need every weapon and bullet if you wish to survive, too. Origins is a pretty challenging game, rife with enemies that can diminish your health and munch away at your healing item supply if you're not careful. The trick to avoiding this in previous games was to run past the beasts as much as possible, but this time foes have a habit of latching onto you if you draw too close to them. This initiates a short quick-time event that allows you to avoid damage, but also gives surrounding monsters a chance to approach and crowd you. Dealing with one demon may not be much of a problem. After a few blows with a hammer and a hard stomp, most beasts perish. Battling several man-eaters at a time, on the other hand, is practically suicide.

There are moments when too many monstrosities approach, and you know that engaging them in hand-to-hand combat is idiotic. That's when you pull out a firearm and dispatch them without a second thought. However, it isn't wise to brandish a gun and initiate a shooting spree every time you hear a bump in the darkness. As it turns out, warring with bosses just about requires you to kill them from a distance, so dumping all of your bullets into lesser goons isn't always a smart option. Like the original game, Origins carefully straddles a line that any good survival horror game should. It provides you with just enough supplies to get the job done, then thrusts you into situations in which you wonder if spending your resources would be a wiser choice than taking flight.

Those choices don't only pop up occasionally, either. Origins features rather elaborate stages with complex series of corridors and rooms to travel through and investigate, all of which are crawling with flesh-hungry demons. And we're talking nightmarish entities, too. Classic zombie nurses make a return, along with Silent Hill 2's straightjacketed ghouls. You'll also encounter beasts like Caliban, a creature that appears to be a tremendous skinned mammal, twisted head over rear in a demonic curlicue. Facing each ghastly Hill inhabitant can be worrisome, especially since the spaces they populate are usually narrow. Much of the game consists of exploring lengthy territories while engaging in resource-sapping combat that begs you to juggle your supplies wisely. 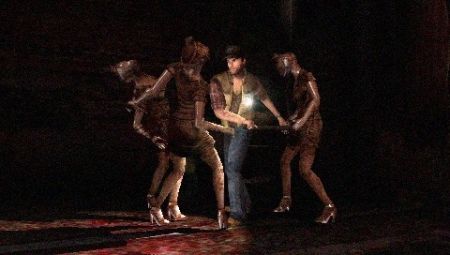 Although this sounds like an old school survival horror dream, there is one hangup that hinders the game's would-be excellence.

To wit, the camera... Oh yes, another dreaded 'c' word that's antagonized many a gamer... Although Origins is challenging, it does at times dabble in cheapness, mostly thanks to inadequate camera positioning. Whenever you enter a room, the camera positions itself in front of you rather than looking over your shoulder and into the room itself. Because of this, some creatures can easily catch you unawares and nail you from off-screen. It gets worse when you combine a foe called Carrion with the aforementioned camera issues. Carrions have a vicious (and just about unavoidable) ram attack that inflicts heavy amounts of damage. I've had more than a few occasions where I blindly entered a room with a Carrion close by. I tend to be frugal with healing items when playing survival horror games, so my health is almost always low. Needless to say that I've been bumped off more times than I can count, all because I couldn't see a few inches to the right.

Although it results in a noticeable flaw, the wonky camera isn't enough to break the game. Silent Hill: Origins is a great addition to a souring franchise, made enjoyable by its stiff difficulty, elaborate stages, and nightmarish scenery and inhabitants. Most of all, it's a true-blue survival horror experience with plenty of bite. Now, if only I could have said that about the previous two chapters...
4/5

If you enjoyed this Silent Hill Origins review, you're encouraged to discuss it with the author and with other members of the site's community. If you don't already have an HonestGamers account, you can sign up for one in a snap. Thank you for reading!

© 1998-2020 HonestGamers
None of the material contained within this site may be reproduced in any conceivable fashion without permission from the author(s) of said material. This site is not sponsored or endorsed by Nintendo, Sega, Sony, Microsoft, or any other such party. Silent Hill Origins is a registered trademark of its copyright holder. This site makes no claim to Silent Hill Origins, its characters, screenshots, artwork, music, or any intellectual property contained within. Opinions expressed on this site do not necessarily represent the opinion of site staff or sponsors. Staff and freelance reviews are typically written based on time spent with a retail review copy or review key for the game that is provided by its publisher.