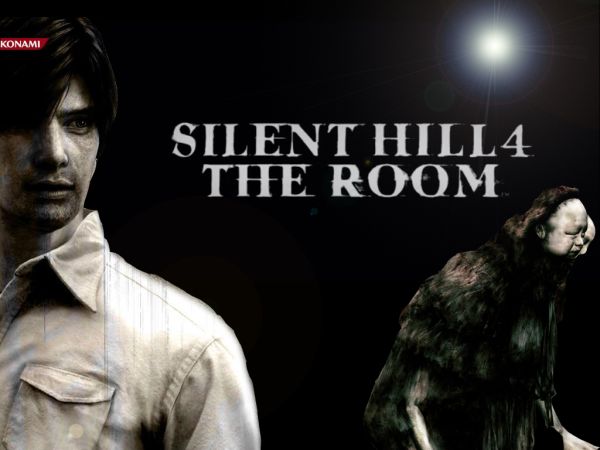 Something is amiss in Room 302. It isn't the ghostly activity pervading its interior, nor the inexplicably chained up front door (which prevents its occupant's egress), nor the slim tunnel in the bathroom leading to a surreal dimension. No, the true stigma within Room 302 is the man who calls it home, Henry Townshend.

The first major issue with Silent Hill 4: The Room is not that the premise itself is abhorrent or unworthy of the franchise. Rather, it's that the man selected to play out this predicament is a depthless dullard, whose favorite activities involve spouting off stock lines and questioning the obvious. Equally yawn-worthy is his next door neighbor and love interest, Eileen Galvin. Throughout the campaign, we learn little about this would-be couple. Worse yet, they're rarely thrust into situations in which their true character comes out, such as we've seen in previous Silent Hill chapters.

As you could tell, The Room's focus isn't on its main characters. As the subtitle implies, the developers instead shined the spotlight on Henry's home and prison, Room 302. In particular, the game's story centers on Henry's attempts to not only escape the room, but puzzle out the 'why' and 'how' of his paranormal incarceration. In Konami terms, this translates to wandering around (read: struggling with clunky first-person mechanics) the apartment and occasionally snatching up scrawled notes and journal entries that magically appear under the front door. Of course, Room 302 has a few other uses as well, such as saving your game, storing items and weaponry, and accessing the third-person portions of the campaign via aforementioned hole in the bathroom wall.

The home base concept may sound like a neat little quirk on paper, but it quickly grows tiresome. You'll find yourself coming back to Room 302 fairly often, usually to free up space in your severely limited inventory. Constantly returning may not seem like a nuisance at first, but when you realize that re-entering the apartment involves skipping two FMVs and sitting through a loading screen, it becomes downright nerve-racking.

As you advance, the apartment doesn't become less of an irritating locale. Eventually, ghostly manifestations take root throughout the room, which drain your health if you approach them. These apparitions would have been an excellent addition to the game were they not so tame. Admittedly, the crying child-like shadow in the bedroom closet is pretty effing creepy, but the moving windows, out of place shoes, television that refuses to turn off, and bloody love seat are all about as cliche as haunted house story devices can get. I expect such tiresome scares from modern Hollywood horror films, not from the company who brought us shiv-wielding demon-children and Pyramid Head. 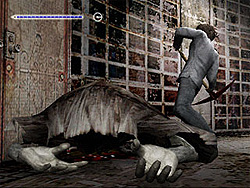 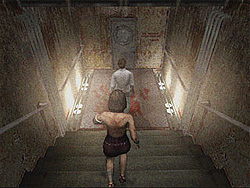 Escaping the confines of the apartment provides little solace. Although the environments that The Room boasts are fittingly dingy and darkly lit, they're less than tantalizing to explore, each one for unique reasons. For instance, the third level takes you through a cylindrical prison, which is unfortunately chore-like to explore thanks to its myriad empty cells. In contrast, there's an urban stage that's incredibly linear and boring to plod through, as well as an underwhelming hospital region composed of a whopping two hallways and a handful of pointless rooms. I don't necessarily require complex stage designs in a survival-horror game, but every stage shouldn't seem like it was quickly spat out and tacked on at the last minute.

The Room's stages fall prey to some consistent flaws as well. For starters, nearly every level requires you to track down event items ad nauseam. While many Silent Hill titles have utilized this device, The Room is quite liberal about it. Before long, the game begins to feel less like a horror title and more like a scavenger hunt. To boot, previous titles also made use of clever puzzles rather than always falling back on tedious item gathering. Of all the tension killers at work in The Room, this one takes the cake.


It's quite obvious the developers wanted to force you to explore these stages, mostly in the hopes that you would run afoul of a variety of demonic nasties. Ordinarily, the game's rogues gallery would have easily inspired fear in me, sporting deformed patients (as opposed to the classic demonic nurses), baboon-like abominations, and two-headed, baby-faced humanoids that walk on their hands. Unfortunately, The Room's cast of flesh-eating miscreants come off as annoyances rather than fear-inspiring entities, mostly thanks to the game's tedious level designs and objectives.

Even worse villains exist called 'victims,' which are hybrid zombie-ghosts. These creatures float through the air and slowly drain your health when nearby. They can also pass through solid objects and even invade other rooms, so they aren't confined to particular locations. Although these adversaries sound oppressive and potentially scary, they are (once again) more of an annoyance. Mainly, it's because they can't be permanently dealt with unless you possess a "Sword of Obedience." Unfortunately, you can't just amass a collection of these swords and pin every ghost to the floor, as there are only about three of them in the entire game. It's almost as though the developers thought the stages weren't irksome enough to tread through without the victims. 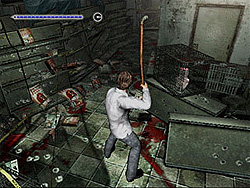 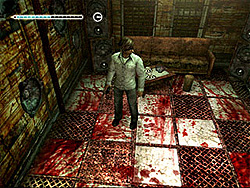 The victims are symbolic of what's wrong with The Room. They hound and annoy you to the point that dealing with them becomes less entertaining with each encounter. Likewise, the campaign finds a multitude of ways to drain the enthusiasm from horror lovers like myself. For instance, previously completed levels reappear halfway through the game, rehashed with fresh objectives and few surprises. That, however, take second place to the game's insistence that the mysterious phenomena revolving around the city Silent Hill can be rationalized. Throughout the game, you'll receive memos that explain away all of the ghastly manifestations and lay bare the once-powerful terror that relied on a sense of mystery and wonder to maintain its spookiness.

HP Lovecraft once said that the oldest and strongest emotion to man is fear, and that the oldest and strongest kind of fear is fear of the unknown. If you've ever watched a bizarre horror movie and wondered why certain phenomena were not explained by the film's conclusion, that would be why. Sometimes there's nothing more frightening than otherworldy concepts that are beyond human comprehension. Lend such concepts rationale, and you deprive them of their ferocity.

Silent Hill 4: The Room is not what it should have been. More than anything, I blame the powers that be at Konami for tossing this project at Team Silent while it was in mid-development (under the title Room 302), and having the brass to not reset the project's deadline. The end result is a rushed horror affair that's neither frightening nor fun, one that's as devoid of character as its own brainless protagonist.
2/5

If you enjoyed this Silent Hill 4: The Room review, you're encouraged to discuss it with the author and with other members of the site's community. If you don't already have an HonestGamers account, you can sign up for one in a snap. Thank you for reading!

© 1998-2020 HonestGamers
None of the material contained within this site may be reproduced in any conceivable fashion without permission from the author(s) of said material. This site is not sponsored or endorsed by Nintendo, Sega, Sony, Microsoft, or any other such party. Silent Hill 4: The Room is a registered trademark of its copyright holder. This site makes no claim to Silent Hill 4: The Room, its characters, screenshots, artwork, music, or any intellectual property contained within. Opinions expressed on this site do not necessarily represent the opinion of site staff or sponsors. Staff and freelance reviews are typically written based on time spent with a retail review copy or review key for the game that is provided by its publisher.