As a kid, I often referred to the opening twenty to forty minutes of a horror movie as "the slow part." I viewed this as the boring-but-necessary phase in which no one died and the monster had yet to show its grotesque mug. The material I was pining for took a backseat while characters went about their mundane lives and engaged in dialog that I mostly didn't pay attention to. It wasn't until I grew older and rewatched some of my favorite horror flicks that I began to realize that the "slow part" wasn't just necessary, but arguably the most important piece of the narrative. For it's at that moment that the audience decides whether or not they can bond with the protagonist and his entourage, and root for them while their situation becomes exponentially grimmer with each passing minute. Otherwise, viewers might find themselves sitting through ninety minutes of misery that's suppose to get their hearts pumping.

Failing to establish a bond between the audience and the characters early on can be damaging to a horror story. It isn't enough that the characters are human and we should care for them "just because"; we have to have a solid reason to invest in them. Sadly, I can think of no better example of such a misfire than Silent Hill 3.

Based on the opening cutscenes, I get the feeling that Konami thought players would bond with Heather, the game's protagonist, because she's a headstrong teenager. Unlike most teen girls, she isn't portrayed as a chatty caricature or a brooding angst victim, but comes off as a fairly level-headed female lead. Unfortunately, that's all we discover about Heather. The developers didn't provide us with any reason to invest in her or root for her, so when she runs afoul of ghastly demonic forces, there isn't much of a reason to hope for her survival.

At first that may not seem like a biggie, and it really isn't. After all, it's early in the game and Konami still has a chance to properly develop the character and set her on a quest that players can identify with. Sadly, she develops very little over the first half of the game. Rather than investing in cutscenes that flesh Heather out, Silent Hill 3 devotes its narrative time to establishing silly villains and engaging in shaky dialog. Outside of that, you'll spend most of your time plodding through monster-ridden locales while Heather makes the occasional snarky comment or acts aloof despite her "dire" situation. In other words, Konami dropped the narrative ball pretty hard with Silent Hill 3. It's a game where a weak script takes precedence over strong character development. As you can imagine, this makes for a fairly tiresome experience.

The first few stages are some of the most difficult to advance through. This isn't due to an inflated difficulty, but because the initial levels are just plain boring. I'll admit that the underpass segment is quite creepy, what with its narrow corridors and occasional monstrous grunts and howls. Outside of that, Silent Hill 3 hosts some vanilla stages in regards to design. The worst offender is the subway station. Not only is this segment needlessly convoluted, featuring a multitude of explorable platforms and hallways, but it's loaded with pointless dead ends. Worse, there are few enemies present in this stage, so you'll spend a lot of time charging through empty areas that offer nothing in the way of scare or reward. More than anything, the subway segment seems to have been hastily slapped together. 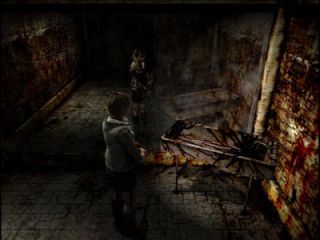 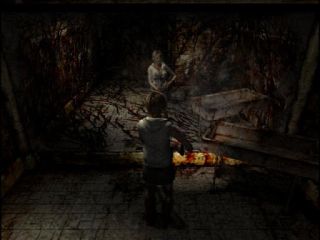 Another stage that bothered me involved an office building with scores of "jammed" doors. While it would be overwhelming to allow players to search every office (or even half of them), it's tedious padding through a hallway to test every door just to make sure that none of them contain items relevant to Heather's quest. More than anything, the abundance of doors should have sent red flags up to developers: maybe an office building is not the best fit for a Silent Hill game, especially since most such structures aren't exactly frightening.

Unlike in previous installments, you don't arrive at these locations after searching tirelessly through city streets for clues. Instead, Silent Hill 3 takes on a more linear structure that its older siblings avoided. This isn't damning, in and of itself, but it hampers the experience when paired with the game's ho-hum early stages. It isn't enough that the levels are already bereft of what made the originals such fantastic games, but depriving the franchise of one of its defining features is pretty disappointing.

It isn't until Heather returns home and finds her living room carpet soaked with blood that her sarcastic attitude dissipates. It isn't until she rounds the easy chair in the very middle of the room and views a scene that shatters her young heart that we feel we should give a crap. And when some of us old time Silent Hill fans establish a connection between this scene and our memories of the previous titles, we can't help but ache with Heather.

...and gladly guide her on her path to revenge.

Silent Hill 3 eventually picks up and nearly remembers what franchise it belongs to in the latter half. The game shifts from the level-by-level, stream of consciousness flow it took on in the early phases of the campaign and sends us back to the familiar fog-blanketed town brimming with hellish mutations and nightmarish traps. For a short while, Silent Hill 3 is actually better than average.

The latter half of the game really takes off, forcing you through a familiar hospital inhabited by zombie-like nurses. Demonic moles also crawl along the floor, their joints popping with each motion and their bodies writhing, as if existence itself causes them profound suffering. Further into the dungeon, you'll find walls that appear to be built of flesh and blood, and several caged off locations that accentuate the feelings of despair and isolation so common to games like Silent Hill. 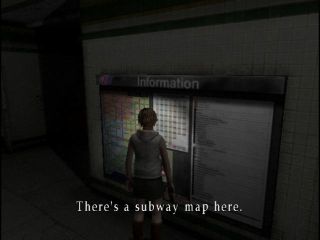 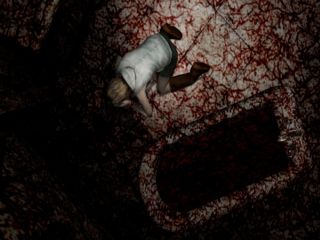 The last few stages take you on a veritable trip through hell. You'll find yourself rushing through an amusement park where adorable bunny mascots, their suits saturated with blood, lay hither and yon. Following that, you'll crawl through a church that appears to be conscientious of your actions. As you rush to complete the final events in the area, the walls begin to bleed and the monsters step up their game. Other creepy effects, including a crying invisible girl who leaves bloody footprints, dare to rattle your sanity further. You might find yourself thinking, after a few such surreal moments: "Why the hell wasn't the first half of the game this good?"

I suppose I could speculate over what caused the downfall of what was once an awesome, young brand destined for greatness. Perhaps the franchise was relegated to a mere cash cow, or maybe they were in a hurry to crank Silent Hill 3 out so they could capitalize on the series while it was still relevant. In any case, the game didn't turn out as great as it should have been. Instead of a hair-raising third installment, Silent Hill 3 is a mediocre horror game sadly attached to a fantastic one.

If you enjoyed this Silent Hill 3 review, you're encouraged to discuss it with the author and with other members of the site's community. If you don't already have an HonestGamers account, you can sign up for one in a snap. Thank you for reading!

© 1998-2021 HonestGamers
None of the material contained within this site may be reproduced in any conceivable fashion without permission from the author(s) of said material. This site is not sponsored or endorsed by Nintendo, Sega, Sony, Microsoft, or any other such party. Silent Hill 3 is a registered trademark of its copyright holder. This site makes no claim to Silent Hill 3, its characters, screenshots, artwork, music, or any intellectual property contained within. Opinions expressed on this site do not necessarily represent the opinion of site staff or sponsors. Staff and freelance reviews are typically written based on time spent with a retail review copy or review key for the game that is provided by its publisher.