Having not played Ninja Commando in nearly two decades, I had a hard time conjuring up any detailed memories from back when I played the game at a sit-down arcade cabinet stationed outside a convenience store in Japan. However, there were some things I still remembered, like it being an overhead action title starring commandos that happen to be ninja, that it's made with the Neo-Geo hardware, and how the convenience store closed down shortly before I moved to the USA. Though, except for that last one, those features can easily be seen by anyone with a quick glance of a video or image, so... For some reason, too, I was under the assumption that the game was badass, and it wasn't till a recent playthrough that I realized why; for its time, Ninja Commando was very impressionable with its detailed, vibrant graphics and its penchant for wanton destruction, due to almost everything on-screen being susceptible to blowing up.

Of course, the first thing that comes to most gamers' minds when they think of a destructive action game for the Neo-Geo is Metal Slug, and while Ninja Commando is quite explosive, it doesn't feel as satisfactory as Nazca's masterpiece. In Metal Slug, it really feels like you earned seeing the buildings crumbling and the soldiers dying with fluid animations because of the amount of resistance and chaos you have to overcome, but in Ninja Commando, a lot of it feels like background noise, since a lot of damageable objects are insignificant obstacles placed to the side. A pillar falling over? Hurray... I guess. A glass container breaking apart? Umm... Coming across the 20th rock sprite that explodes in a boring mess? Erm... You can just run pass most, but you'll annihilate them anyway for a chance to uncover items, making destruction more of a chore than a reward. 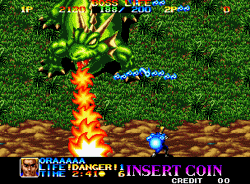 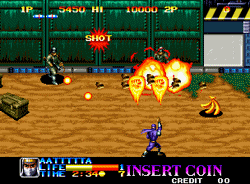 Also, the enemies you encounter, despite being hard to fend off at first, are actually somewhat of a letdown once you notice a ton of them stay in place at a distance, with some only moving around erratically when you get close. And considering this is a game where you can toss an infinite amount of projectiles across the screen, disposing a large sum of Ninja Commando's foes is a joke. The game is still tough at times, and it's mostly because of "unconventional" means. The collision detection with your projectiles, for example, is kinda loose when making contact with characters, despite the fact your ninja is usually flinging 5 to 10 of them, simultaneously, at any given time. Occasionally, some enemies like to rush through you, and this is a bigger pain than it should be, since your protagonists have tiny invincibility frames between attacks; get used to your lifebar being drained more than once as a soldier or caveman run through your character sprite.

It's a shame the action is mediocre at best, because there's some interesting mechanics that you don't normally see in these kind of overhead action games. Whenever you destroy an opponent, they'll drop coins to pick up, which is a means of replenishing your vitality at level's end. Another cool inclusion are special attacks, each character with differing sets, where you must perform a combination of motion and button presses to activate. Though, their main flaw is that they're really, really useful during boss fights, toning down Ninja Commando's few challenging moments. But the oddest mechanic goes to the charge attack: instead of holding down the button for a powerful attack, this game wants you to mash the button for an eventual stronger attack, and they want you to keep mashing to maintain its strength. It's a weird modification that gets tiring during combat. 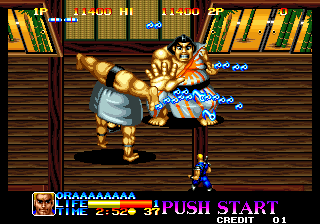 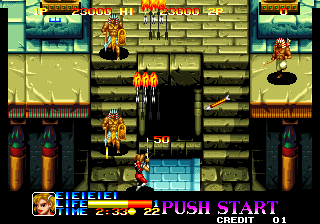 While my reunion with Ninja Commando didn't go as well as hoped, thanks to uninspired gameplay, I still came away with a grin on my face. See, there's a plot. About time travel. Specifically, the game is about time traveling ninja commandos that go in the past, in an attempt to repair a damaged timeline caused by a rampaging businessman with an amazing pompadour. That premise alone is insane, especially considering how their solution to "repairing" the timeline is by destroying everything in sight! As if that wasn't enough, Ninja Commando out-crazies itself with some of the most absurd and unbelievable dialogue I've seen in a video game plot involving time travel. After laying waste to three mummies midway through the Egyptian stage, a cutscene breaks out, and they ponder if said foes were just robotic creations. Here is where I thought the devs were attempting to justify the timeline "cleansing". Throwing me for a loop, they turn out to be real mummies, and after a moment of silent reflection from our, erm, heroes, they continue their questionable rampage unfazed.

Another winner is when the protagonists first hop into a time machine, the big bad businessman suddenly appears on an unknown monitor and, like someone being picked on at a schoolyard, says, "You guys, don't ruin my scheme! Get lost!" And after defeating two, towering sumo wrestlers that can break dance and unleash flames, one of your characters utter, "I can't beat the sumo power!" But the absolute crowning moment of absurdity goes to the opening cutscene for the Japanese Civil War Era level, in front of Nobunaga Oda's castle. Immediately, and completely out of nowhere, one of the ninja is enraged, wanting nothing but to kill this significant person in history. You'd think the other characters would object, but nope, they all invade the castle and kill Nobunaga Oda. And it's only afterwards that they say, "We went too far when we killed so many." Menacing Pompadour Man appropriately responds with: 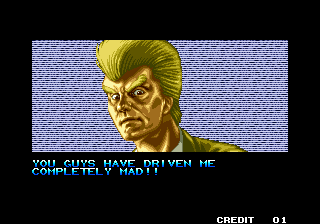 If you enjoyed this Ninja Commando review, you're encouraged to discuss it with the author and with other members of the site's community. If you don't already have an HonestGamers account, you can sign up for one in a snap. Thank you for reading!

© 1998-2020 HonestGamers
None of the material contained within this site may be reproduced in any conceivable fashion without permission from the author(s) of said material. This site is not sponsored or endorsed by Nintendo, Sega, Sony, Microsoft, or any other such party. Ninja Commando is a registered trademark of its copyright holder. This site makes no claim to Ninja Commando, its characters, screenshots, artwork, music, or any intellectual property contained within. Opinions expressed on this site do not necessarily represent the opinion of site staff or sponsors. Staff and freelance reviews are typically written based on time spent with a retail review copy or review key for the game that is provided by its publisher.