Growing up, I always had an affinity for Xexyz. In combining a fun jaunt with a double dose of weirdness, this Nintendo cartridge summed up my youth in gaming as well as anything else I owned. And we're not just talking about the name, which I honestly couldnt tell you how to pronounce.

In Xexyz, you control a guy named Apollo who apparently is no relation to either the Greek sun god or to Rocky Balboa's first big cinematic opponent. He is a guy determined to save a bunch of planets from the invading Garuza forces, which have taken over, kidnapped some princesses and erected giant fortresses everywhere. Each of the game's six worlds is divided into three parts and they all essentially play out the same way, with the main differences being cosmetic. In summary: 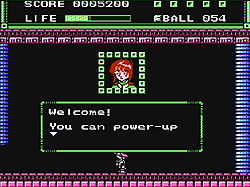 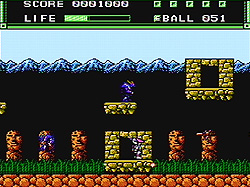 THE PLANET is an interesting place where your primary goal is to find a special item that is used to unlock the door to the fortress. To do this, you have to walk through some sort of setting, such as a forest or volcanic region, while shooting at every set of star-decorated blocks you find. When you find the right one, a hidden door will appear, leading to a fight against a giant statue. Beat that statue, get the star, and you're done with the planet. Of course, there are plenty of other things to do, as each planet is loaded with doors to enter. Robots sell you items and challenge you to gambling games, you can jump up and headbutt ghosts into treasure chests to get more cash, a frog will heal all your wounds, random people hand you cash, and you can fight disembodied heads to free women trapped in bathtubs. These are some pretty eclectic places you'll be visiting.

The main challenge comes from, well, the simple fact you're playing a NES game. Those titles tend to balance out their brevity with pockets of insane difficulty. Enemies swarm the screen at all times, often firing projectiles as they arrive. They also re-spawn as you walk back and forth. Whenever you leave a room, you have to be quick on your feet, lest something immediately careens into you. There's also a bit of a reverse difficulty spike with the force star guardians, as they're brutally difficult early in the game when you have weaker weaponry and a small life meter. However, by the time you've made it to the third or fourth planet, mopping the floor with them is childs play because they can only sustain a couple of hits from the better guns at your disposal and you have enough health to withstand their reprisal without too much trouble.

However, these places are only transitional zones, destined to lead you to THE FORTRESS. Initially, these places are about as linear as their planets. You'll go from left to right, entering rooms to buy information or items and only occasionally take a side path. Midway through the fortresses, youll find brief interludes where you jump on one contraption or another and embark on a brief shooting stage. While not overly difficult, these segments can get annoying, as each one is divided into two or three parts separated by a pair of doors. Pick the right door and you'll advance, but if you go through the wrong one, you'll have to redo that section, which can take a toll on the ol' life meter. You see, while there are life-boosting items scattered around the platforming sections (and also occasionally dropped by foes), none of those appear during the shooter stages. It's important to get in and out as quickly as possible. Thats especially true later in the game, as the fortresses become larger and more maze-like -- making it tricky just to find your way through without the added challenge that comes from your need to restore 80 percent of your health along the way.

At the end of each fortress, you'll be encouraged by the giant floating head of some guy to jump on a hovering platform to take out that planet's boss. Many of these guys are giant robotic animals with a definite aquatic flavor to them, much like what you might have seen in the Darius series of shooters. There's actually a good reason for this theme: in Japan, this game was originally based on some old legend about a guy who wound up living underwater for a long period of time. When it was ported to the West, that story and some of the game's more whimsical elements were ditched in favor of something more sci-fi. However, a lot of stuff remained the same, which is probably why we have a game where fairies and robots exist side-by-side.

Thats the sort of thing that is showcased most clearly during THE FLIGHT, where you go from one planet to the next. You'll start off by jumping on a spaceship designed to look like a turtle or some other animal, then head through another horizontally-scrolling shooter level. These moments can be among the toughest parts of Xexyz because, much like the shooting stages in fortresses, you can gain speed and power boosts but there's no way to regain lost life. Additionally, each one ends with a boss fight. And if you die at any time in one of these, it's back to the beginning of the level for you. So, you'll be trying to avoid a ton of enemies and projectiles while grabbing power-ups and then going through a fast-paced section where enemies will be backed up by a slew of obstacles that are quite damaging to the touch, while all the time hoping you'll have ANY room for error by the time you limp into the boss fight. Most of my frustration with this game comes from these moments. 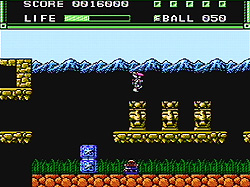 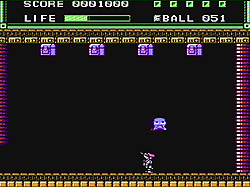 Other than them, Xexyz is a pretty manageable game with my main stalling point being one particular boss fought fairly late into the game. Horrza looks pretty awesome (the fact that hes a jet-pack-wearing dragon wielding a pair of guns -- one seemingly grafted into its tail -- might be the coolest thing imaginable), but he'll utterly slaughter all but the most skilled players with nonstop fire aided by his erratic movements up and down the screen. Sure, nowadays, thanks to a YouTube video, I know a very cheap way to beat this beast, but as a youth, it was one of those "die 50 times to win on the 51st" encounters.

Thats the sort of encounter that winds up giving me rose-colored memories years down the road -- those amazing moments where I rise above my usual skill level to overcome a fearsome challenge. Fortunately, while Xexyz might have its failings and frustrations (particularly with its shooting stages), it still brings the fun. It's worth a look because it's a strange little title loaded with all sorts of neat little things that really shouldn't fit together, but the action is fun enough to convince players to stay around to see the entire game.
3.5/5

If you enjoyed this Xexyz review, you're encouraged to discuss it with the author and with other members of the site's community. If you don't already have an HonestGamers account, you can sign up for one in a snap. Thank you for reading!

© 1998-2020 HonestGamers
None of the material contained within this site may be reproduced in any conceivable fashion without permission from the author(s) of said material. This site is not sponsored or endorsed by Nintendo, Sega, Sony, Microsoft, or any other such party. Xexyz is a registered trademark of its copyright holder. This site makes no claim to Xexyz, its characters, screenshots, artwork, music, or any intellectual property contained within. Opinions expressed on this site do not necessarily represent the opinion of site staff or sponsors. Staff and freelance reviews are typically written based on time spent with a retail review copy or review key for the game that is provided by its publisher.