In the foreground is a ravaging tank, with chain guns a-blazin' and its turret melting from extreme overuse, crushing a jeep with its treads, which already has soldiers stuck and flattened by them. The background? A nuclear explosion, of course. Now flip to the back and see three images displaying a building being blown to bits, a vehicle surrounded by multiple explosions, and an indistinguishable mesh of metal getting obliterated. Really, all you need is one brief inspection of Mass Destruction's case to get a very good idea of what you're getting for your money. Want something briefer? How about: a game called Mass Destruction. And it stars a tank, a rare thing to see in a video game, and also becoming more scarce with each passing decade. From the game's title and a protagonist that's destructive by nature, it's obvious the kind of experience the devs envisioned, and they definitely achieved their goal in this overhead "strategy" shooter.

I write strategy in quotes since, compared to the likes of Soviet Strike and Command & Conquer, both war-themed overhead titles also released for the Saturn, Mass Destruction does an intentionally lousy job in this department. Every level has mission objectives, but 99% boil down to "blow the crap out of this vehicle or structure", with only a scant few objectives revolving around not damaging certain things, like hostages that, ironically, can only be picked up by running over them. On the surface, the game adds these little things to seem relevant to other titles of its era, but once you actually play Mass Destruction, you immediately realize they're just coating. This product harkens back to a time, a decade prior, when games didn't need a deep plot, voice acting, or even mission structure to an extent, back when you inserted a coin into a machine or hit the start button on an NES controller, and all you had to do was attack the opposition without complex mechanics. 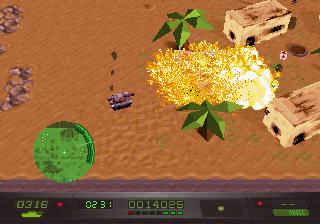 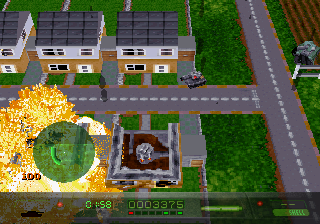 You really need to come into the game with a "mindless shooting" frame of mind, because if you approach it with a strategic, calm plan, which might include strafing tanks and conserving more powerful ammunition, then Mass Destruction is going to be a bore to play. With your tank being pretty maneuverable and projectiles speedily flying out without the need to reload, once you get the feel for the terrain and enemy AI, it's super easy and fun to just destroy everything in sight: blow away a desert palace with high-ex(change?) shells, casually squash countless soldiers and hear their squeals, wreck open bunkers with your flamethrower, and skillfully knock pesky helicopters out of the sky with mortar attacks. Shoot, the game even encourages you to destroy nearly everything on a map to uncover bonus stages! There's so much ammo and health items scattered around each map to make this doable, that all you need is not be a greedy bastard by picking up every health box on first sight to survive.

Considering Mass Destruction is a 3D title on the Saturn, a console that a lot of developers had trouble tapping power from for numerous reasons, the reliance on fast-paced gameplay, plus the intensity of some destructive effects, could have stilted the game's experience with a number of problems. However, it's surprisingly almost void of graphical flaws and technical sores that many Saturn titles openly display, such as pop-up and a dive in framerate when too much is on screen. Mass Destruction's team most likely sidestepped these issues by imposing a minimalist approach to design, like a fixed camera and simplistic visuals, an interesting counterpart to the action that keeps in tune to the "basic" theme of the game. The graphics have a charming and neat look to the title, too, like the cute polygon palm trees and rivers that actually give off reflections to buildings and explosions, the latter an impressive feat to see in a Saturn or PlayStation game in their day. 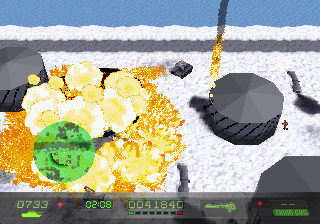 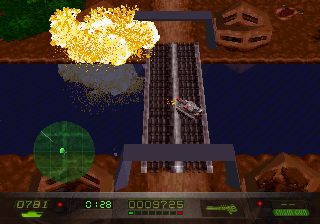 While I believe the development team succeeded in creating a basic action game that pays its respects to a previous generation, I also believe their unwillingness to make a more refined or unique take on the formula prevented Mass Destruction from reaching a greater potential as a fun shooter. Ironically, the ruse of making the game seem like a strategy title with its tame objective structure is probably the main reason Mass Destruction's action kinda feels more directionless than it should. The devs tried melding two worlds together, and because they didn't put much effort into one (strategy), the action half sometimes suffers, as if it's hopping on one leg. I mean, yeah, the game truly is more "mindless" shooting, but there are moments when you're in a stage, in a big map with only two main objectives in small areas, and you can't help but think, "That's it?" Doesn't help that you don't have many levels to work with, plus there's only four background palettes, so get used to seeing the same imagery a whole lot.

There's also the fact that Mass Destruction is available on the Saturn, a console that's known for its library of action titles, which extends even more if you consider imports. With a wide variety of games to choose from, a lot of which have neater concepts and gimmicks to mess with, Mass Destruction's very basic approach in nearly all fronts (except the catchy techno-esque soundtrack), guarantee it's going to be skipped for later by Saturn owners, likely newer ones, looking to build a legit collection. Unless they can find it cheap and in good condition, I guess. You'll have your fun with this game if you like playing with tanks and can shut off your brain for pure lunacy, but if you want just a tad more substance with your action, you're better off with an import or a good Sega-developed product.
3/5

If you enjoyed this Mass Destruction review, you're encouraged to discuss it with the author and with other members of the site's community. If you don't already have an HonestGamers account, you can sign up for one in a snap. Thank you for reading!

© 1998-2020 HonestGamers
None of the material contained within this site may be reproduced in any conceivable fashion without permission from the author(s) of said material. This site is not sponsored or endorsed by Nintendo, Sega, Sony, Microsoft, or any other such party. Mass Destruction is a registered trademark of its copyright holder. This site makes no claim to Mass Destruction, its characters, screenshots, artwork, music, or any intellectual property contained within. Opinions expressed on this site do not necessarily represent the opinion of site staff or sponsors. Staff and freelance reviews are typically written based on time spent with a retail review copy or review key for the game that is provided by its publisher.