After I spent about ten minutes playing Zeno Clash II, developer ACE Team's apparent goals with this franchise became clear to me. The members of the development team seem to view this budding IP as a potential flagship, one that requires them to market the series to a broader audience. That, of course, means expanding many of the original's concepts in an effort to produce a title that's more up to speed with modern action/adventure standards.

Although they seem to have done precisely what I imagine they set out to do, though, the developers have unfortunately produced a finished product that is more likely to polarize players than it is to earn the series any new fans. Some will surely see the game as horribly dated, and others will reluctantly accept it as the necessary progression of the franchise... and then you have folks like me, who see Zeno Clash II as just one more oddball first-person brawler with plenty of bite despite its shortcomings.

Most of those shortcomings aren't of the technical variety, though there are a few kinks in that department. For instance, the game sports a slimmed down field of view (FOV) that might be a deal-breaker for many gamers. In fact, so many players reported becoming nauseated as a result of the game's narrow field of view that ACE Team soon released a patch to allow you to select a wider view via in-game display options. Unfortunately, there are still only two different FOV settings. If neither of those options are to your liking, your only other choice is to retool the game's configuration files until you've found a setting that's comfortable for you. If you aren't very tech savvy, such an undertaking can be a pointless nuisance. Honestly, the default FOV didn't bother me one bit, but I'd be remiss to not at least mention the issues it has caused others. 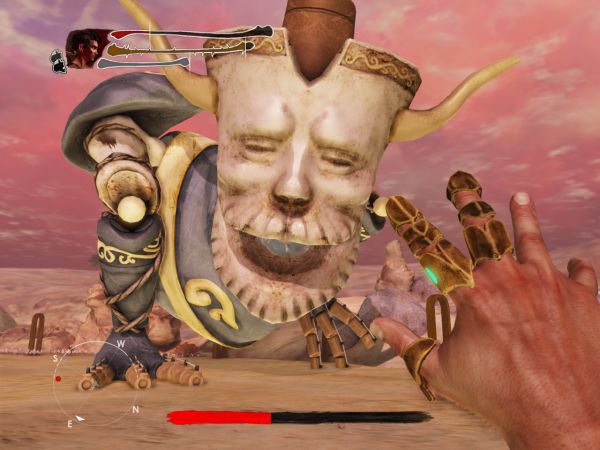 Honestly, though, any minute technical flaws pale in comparison Zeno Clash II's biggest misstep: world design. The original game gave you tiny glimpses of its odd realm through brief alleyways or tight forest paths, bereft of exploration or depth. Zeno Clash II, on the other hand, delivers grander hubs. Cities consist of whole buildings and traversable streets, and the Corwid Forest provides wider pathways, more spacious glades, and tucked away pockets loaded with goodies such as grenades and restorative items. Now and then you might even locate a skull totem, which awards you with a skill point that can be used to boost stats such as strength or stamina.

Although the world is more expansive this time around, though, stage designs still feel dated. Zeno Clash II attempts to provide an element of exploration that wasn't utilized by its predecessor, but the result still lacks in comparison to modern adventure titles. Even though the stages are more fleshed out, they remain little more than massive arenas with a few divergent avenues put in place to make them seem deeper than they actually are. This may have sufficed circa 2001, but standards for exploration have changed drastically since then. If you're going to craft a world that's ripe for exploration, you pretty much have to go the fully open world route these days. I understand that ACE Team doesn't have an exorbitant budget to create a game on such a grand scale, but Zeno Clash II's world leaves something to be desired in terms of exploration and theres no getting around that.

As a fan of the original installment, though, I can look past the lackluster exploration because I really only desire two things from a Zeno Clash sequel: tons of strangeness and oodles of pugilism. Thankfully, this follow-up features both of those elements in spades. 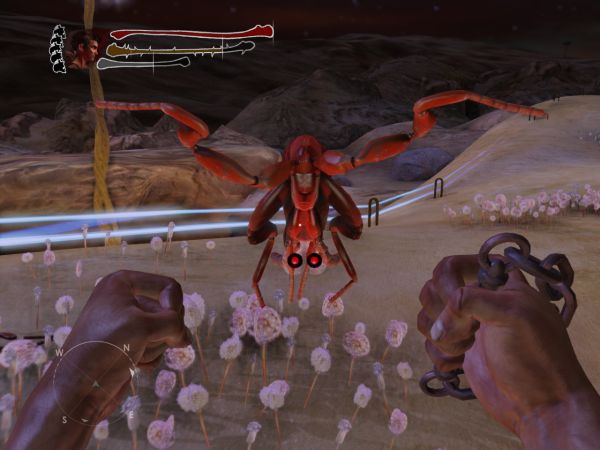 Dwelling within the game's peculiar world is a wild assortment of exotic creatures, cultures, and phenomena that form Zeno Clash II's main attraction. It's not uncommon to find yourself kicking land-roaming shrimps the size of Dobermans, or brawling with two-headed semi-anthropomorphic baboons. At one point, you can embark on a side quest to help an armless painter who looks like Mr. Saturn's inbred cousin as he works to gather colored moths. Later on, you'll find yourself liberating and defending the original game's gender-bending, baby-snatching antagonist FatherMother, a creature who looks like an old woman with a drooping face spliced with a chicken. As you can tell by the examples I've given, "weird" doesn't even begin to describe Zeno Clash II's world.

Also a citizen of this unusual dimension is a man with a bad haircut named Ghat, who serves as the game's protagonist. He isn't a deep, emotionally damaged character with a heartrending backstory. Rather, Ghat is a fairly simple man living in a primitive culture that's being forcefully developed by an "enlightened" golem named Kax-Teh. This, of course, doesn't sit well with Ghat, who eschews concepts like law and order in favor of more brutal solutions like "punching" and "breaking faces."

...And boy, does he ever break some faces in Zeno Clash II! This game once again dons a first-person perspective, which may sound awkward for a beat 'em up. You may come to love the setup, though, when you actually see your knuckles crunch the nose of your first opponent. That first attack might inspire you to master the game's combat system so you can further check out Ghat's combative repertoire. Should you undertake such an endeavor, you'll discover that brawling in Zeno Clash II is not a matter of wildly mashing buttons. Landing effective combos requires you to time your button presses and develop a certain rhythm. If you press too quickly, the game will fail to register your attacks, which can make for clunky fights. When you've gotten that rhythm down, though, you'll find yourself brawling with the best of them and pulling off sweet attacks. 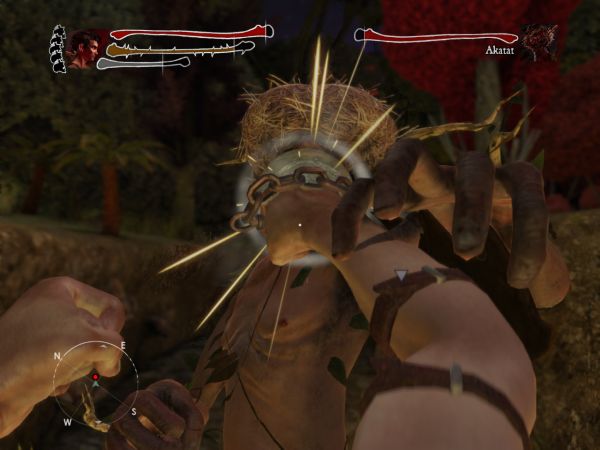 It took me a few sessions of playing to get the hang of Zeno Clash II's combat mechanics. For a while, I relied heavily on shifting between basic punches and haymakers. Suffice to say, that didn't make for terribly interesting scuffles. Eventually, I decided to challenge myself and experiment with Ghat's expanded move list, which is when I started to fall in love with the game. I found myself delivering punishing uppercuts that lifted opponents off their feet, then further acquainted them with the dreaded force of gravity as I launched them off cliffs with fatal kicks. I took suckers out with many double-fisted thrusts or blasts from the occasional rifle or handgun I sometimes found laying around. For moments when crowds grew too ornery, I controlled them with a horizontal lash from my equipped chain. That technique may not sound impressive, but it was a real life saver because it usually managed to nail a few opponents at a time for decent damage. If ever the opportunity to grapple an adversary arose, I didn't waste it. That was when I could execute my favorite combo, which began with an onslaught of knees to the face and concluded with a neck-breaking pile driver.

Although I'm making myself sound awesome, the truth is that I did get my clock cleaned a few times. Because of that, I learned to utilize the game's many recruitable allies. Villains from the original game like the straw-hatted Rimat and the bird-headed Gastornis return as computer-controlled sidekicks in this installment. Although cooperative AI is usually synonymous with "unreliable," I actually found Zeno Clash II's companions to be fairly helpful. Not only did they soften up the competition, but they also drew many of them away from me. That allowed me to knock out a smaller number of fools and preserve my vitality before jacking the jaws of the remainders.

Ultimately, Zeno Clash II is a step in the right direction, and an ambitious one for an indie company like ACE Team. Even though parts of the title still feel years behind the curve, the game is effective in the departments that matter most. The strangeness is still delightful and the combat is still engaging and exciting. My only wish for a possible Zeno Clash III is for ACE Team to expand the game's world even further. I'd like to see a truly open world with more worthwhile exploration and plenty more off-the-wall sights. Most of all, though, I'd like to see them maintain the same level of weirdness and action. Give me a fully explorable, offbeat world full of odd things to punch and I just might die of fanboyish ecstacy.
4/5

If you enjoyed this Zeno Clash II review, you're encouraged to discuss it with the author and with other members of the site's community. If you don't already have an HonestGamers account, you can sign up for one in a snap. Thank you for reading!

© 1998-2020 HonestGamers
None of the material contained within this site may be reproduced in any conceivable fashion without permission from the author(s) of said material. This site is not sponsored or endorsed by Nintendo, Sega, Sony, Microsoft, or any other such party. Zeno Clash II is a registered trademark of its copyright holder. This site makes no claim to Zeno Clash II, its characters, screenshots, artwork, music, or any intellectual property contained within. Opinions expressed on this site do not necessarily represent the opinion of site staff or sponsors. Staff and freelance reviews are typically written based on time spent with a retail review copy or review key for the game that is provided by its publisher.