Let's not waste time with obligatory introduction shenanigans. Let's just get right to the point today and say that Super Black Bass 3D is not a good game.

There are not many excuses to offer as to why this should be; it's a long running series stretching back to the NES era, yet its numerous updates through the years have always been met with indifference. In this case, they've released a game with so much inactivity, you'll need to find something to do during the long periods of time where nothing happens. Like enjoy a handheld video game. My PSP hadn't seen a lot of use this year -- this all changed during my playthrough of Super Black Bass 3D.

PRO: Finally got around to beating Ys: The Ark of Napishtim.

CON: Was reminded how good handheld console games could be while suffering through Super Black Bass 3D.

See, I'm not wholly ignorant. I'm aware that you're unlikely to land a fish every five minutes should you venture outside to go on a real fishing trip (don't do it - there's wolves!) but I was more or less finishing entire dungeons in between the landing of two of three fish. That's a crazy amount of down time in a video game. What's worse is you're given absolutely no idea on what it is you might be doing wrong. My record time for inactivity currently stands at forty two minutes. The reward for my patience? To be told the fish I had eventually caught was too small by tournament standards, and would have to be released.

Tournament fishing is the only way to advance the game. You start off proceedings with basic stock lures and rigging, and make your money by selling off the fish you catch. By building up large piles of loot, you can slowly upgrade your equipment and buy handy bits of extra kit, like a boat. Thing is, keeping up to date with gear is the only way to win tourneys, and, even fully tooled up, you're looking at a good few hours of fishing to record yourself a win.

Perhaps things would be more tolerable if Super Black Bass 3D wasn't such a point blank ugly game. The sad fact is, watching things unravel is an exercise in boredom. The water effects are non-existent, making large bodies of water look like a collection of the colour green. An unresponsive green that looks flat enough to resemble a table top more than a lake. Character models are weird freakish mutants, and the fish move stiffly enough to suggest they only have three frames of animation. Everything's just so dull to look at, compounded by the producer's choice on hype screens. Its common practise that, before release, a publisher will drop screenshots onto the Interwebs to drum up excitement for their upcoming title. Observe now what poor Rising Star had to settle upon to whet you appetites: 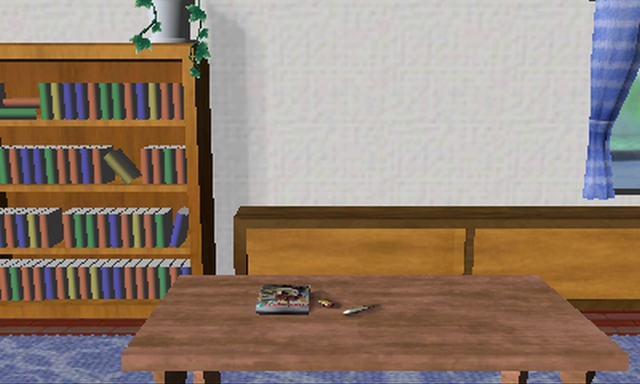 Tables and dying pot plants -- that'll get them preorders flying in. In the interest of fairness, here's the legitimately most exciting screen of the lot: 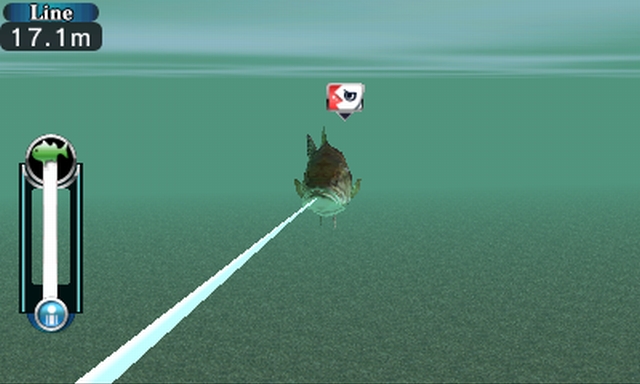 Though, to be fair, it is quite an accomplishment to hook a fish using what seems to be a solid steel cable.

In an attempt to finally give me something good to say, casting and reeling is all worked around the 3DS' internal motion detectors, meaning there's a lot of flicking and pulling which could have worked out as a cool (ahem) angle. The problem here is that pulling off a natural overhead cast feels like the top screen of the 3DS is going to come loose and literally fly across the room. To combat this, the game asks you to hold the top screen solid with your thumbs, therefore deleting the mention of the word "natural" from my previous statement. Moving the line from side to side via tilting seems to work much butter, but jerking the line back to try and hook a fish taking a nibble at your bait doesn't always register. You hit the A key to reel your line in, but that happens at the approximate speed of Half Life episode releases.

The controls, the awful, wonky controls that feel like they might break your console if you don't take measures again it, are probably the game's highlight. More of a pity because the bits that work quickly become borderline obsolete. Hook a bite, and the vast majority of battles see the fish trying to escape in an almost perfectly straight line, meaning that the tilt mechanics (that work - they really do!) hardly ever gets a proper excuse to be used. All fish use these same shoddy tactics to try and escape, ensuring that hooking one fish is rarely any different from hooking another.

Is anyone excited about playing Super Black Bass 3D yet?

Some games simply offer no redeeming features, and this, sadly, is a textbook example of one of them. There's so little to celebrate about Super Black Bass 3D I'm forced to wonder about the reason for it being released. Check the facts, and you'll see it's developed by a company called Star-Fish, a developer formed by former Hot.B employees who were directly responsible for the original game all the way back on the MSX in 1986. Though most of these releases never saw the outside of Japan, there's just under twenty titles in this long running series, spanning any number of consoles -- that's a long time to be making a specific genre of video games. One wonders why they're still not able to make a good one.
1/5

If you enjoyed this Super Black Bass 3D review, you're encouraged to discuss it with the author and with other members of the site's community. If you don't already have an HonestGamers account, you can sign up for one in a snap. Thank you for reading!

© 1998-2020 HonestGamers
None of the material contained within this site may be reproduced in any conceivable fashion without permission from the author(s) of said material. This site is not sponsored or endorsed by Nintendo, Sega, Sony, Microsoft, or any other such party. Super Black Bass 3D is a registered trademark of its copyright holder. This site makes no claim to Super Black Bass 3D, its characters, screenshots, artwork, music, or any intellectual property contained within. Opinions expressed on this site do not necessarily represent the opinion of site staff or sponsors. Staff and freelance reviews are typically written based on time spent with a retail review copy or review key for the game that is provided by its publisher.