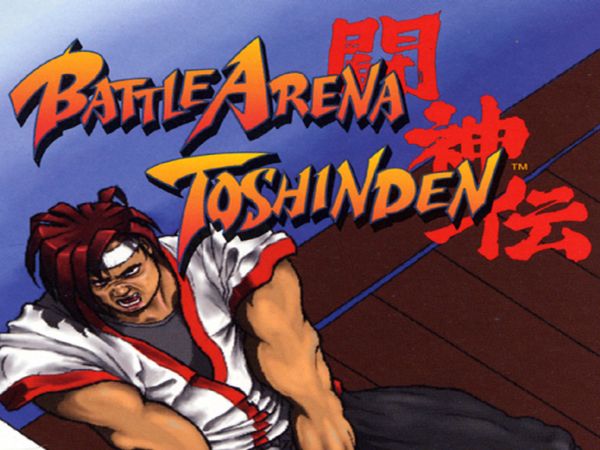 I'll never forget my first glimpse of the game Battle Arena Toshinden. While channel surfing one night, circa 1995, a display of commercialized sexuality happened to catch my teenage eye. Between stock footage snippets of scantily clad women were brief flashes of a leather-donning vixen, rendered in glorious 32-bit. A satanic voice growled from my TV's speakers: "Like to be humiliated by women?" My heart thudded in my chest in response, steadily building in rapidity as if it were intent on exploding. The build was immense, and the payoff...? "Here's your dream date," said the demonic narrator. My dream date... the fantastical, unreachable standard of a woman that no significant other could ever measure up to. Geez, this was serious. I had to own this game.

Just then, a horrible thought occurred to me: my most powerful console was a Super Nintendo, and this game was obviously geared for more advanced hardware. As if reading my thoughts, the narrator said, "You are not ready." The commercial ended and I glanced over at my SNES and experienced a feeling I would become familiar with as I grew into adulthood: inadequacy. My perspective on life changed in those two minutes, birthing a new lofty goal in the form of obtaining this game. Only then could I prove to my whip-brandishing mistress that size really doesn't matter! 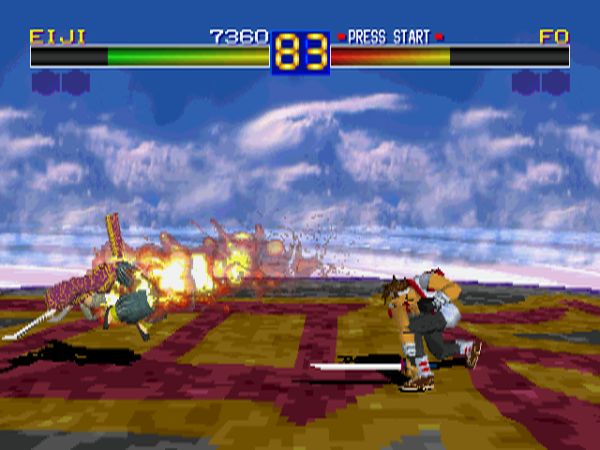 I found many forgivable transgressions in my first playthrough (and even forgave them again when I replayed the game recently). For instance, I wasn't irked by the blocky character models because the background environments provided enough visual beauty to distract me from them. Take Eiji's stage, for example. Its pure white mountains and the light touches of lush greenery always struck me as a dreamy vacation destination. I could also live with Ellis's overly childish cries and Fo's high-pitched banter, thanks to the game's amazing soundtrack. Certain cuts on the score, like Duke's high energy theme, helped me to ignore the constant barrage of atrocious voice overs. Although I'm no fan of the voice acting, I'll admit to indulging in the sick pleasure of causing a spear-wielder named Mondo to ring out, if only to hear him yell, "GOOOOOO-GAAAAAHHHH-LAAAAAAAH!!!". Because that's precisely what I would shout, were I to plummet to my death...

What I can't forgive, though, is inconsistent AI.

I've had my share of fast-paced wars where my opponent and I traded blows and blocked each other frequently. However, such matches provide average entertainment at best. This mostly has to do with Battle Arena's inability to stand out, as the game borrows too heavily from titles like Street Fighter II. That truth is especially noticeable in Battle Arena's button scheme, where you perform special attacks using many of Street Fighter II's button combinations. Worse, the game tends to move more slowly than most of its ilk, depriving players of the swift combat seen in many SNES, Genesis, and Neo-Geo fighting games. In that respect, I fail to see how this game is in any way an improvement on the genre over titles offered on older hardware. 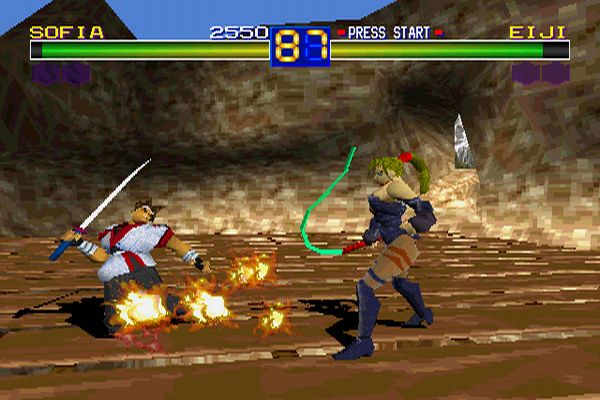 At its worst, Battle Arena is a spiteful demon with a penchant for cheap maneuvers. Certain warriors like Kayin, Eiji, Mondo, and Duke possess an array of devastating moves that segue into powerful combos capable of stripping away nearly a third of your health. On top of that, the computer loves to spam these attacks. Playing against Kayin can be an especially torturous affair, as the man loves to "shoryuken" his opponents to death. Just as they're getting to their feet, he'll cut loose with another flurry for good measure. Not only does this show that the game's move sets are limited, but it demonstrates that the computer can't think beyond spamming in order to win.

Then again, I prefer such instances of cheap difficulty to intermittent battles with brain-dead adversaries. Now and then the computer's AI routines will mysteriously devolve into mindless actions, making opponents easy prey. For instance, I've had matches where Eiji will crouch and repeatedly kick at the air in front of him while I remain twenty feet away, safe and cozy. I also remember one brawl in which Rungo charged at me, full speed ahead. I sidestepped the brute in response, expecting him to come screeching to a halt. Instead, he ran at top speed off the edge of the ring. Moments of stupidity like this do not make for satisfying victories, and they can actually be as embarrassing because they are so comical.

The real kick in the groin doesn't come until you've defeated the final boss, at which point you might expect a cinematic ending. Instead, what greets you is a lifeless paragraph stating that the tournament has ended, but the journey has just begun. No, really. For all your hard work, your reward is a roundabout way of saying, "Tune in next week!" 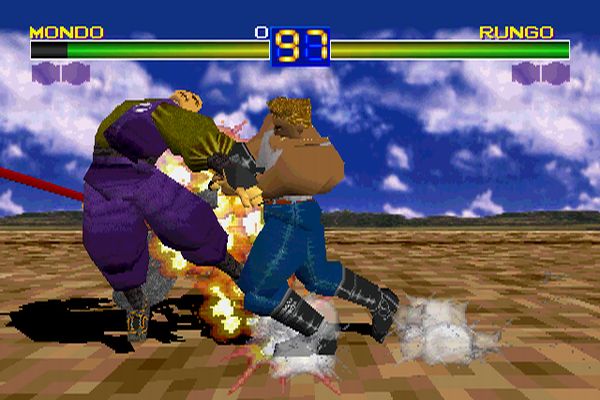 Ultimately, Battle Arena Toshinden is a forgettable fighting game overshadowed by its brothers. Genre titles released well before Battle Arena arrived on the scene manage to outperform it in terms of speed and all around entertainment. That alone set the game up for obscurity, and with the eventual release of games like Tekken and Soul Blade, Battle Arena became an even less desirable choice. From there, the game had nowhere to go but the cold limbo of obsolescence, where it joined myriad WWF/E video games and a handful of forgotten launch titles. There you can still find it, and possibly youll even enjoy it if you're willing to forget all of the advancements showcased in modern fighting games.
1.5/5

If you enjoyed this Battle Arena Toshinden review, you're encouraged to discuss it with the author and with other members of the site's community. If you don't already have an HonestGamers account, you can sign up for one in a snap. Thank you for reading!

© 1998-2020 HonestGamers
None of the material contained within this site may be reproduced in any conceivable fashion without permission from the author(s) of said material. This site is not sponsored or endorsed by Nintendo, Sega, Sony, Microsoft, or any other such party. Battle Arena Toshinden is a registered trademark of its copyright holder. This site makes no claim to Battle Arena Toshinden, its characters, screenshots, artwork, music, or any intellectual property contained within. Opinions expressed on this site do not necessarily represent the opinion of site staff or sponsors. Staff and freelance reviews are typically written based on time spent with a retail review copy or review key for the game that is provided by its publisher.