In a time of despair, the king of a powerful nation summons a buxom battler decked out in shining armor (that would be you) to his court. Upon arrival, the monarch bemoans the abduction of his daughter by a wicked sorcerer, who has imprisoned her in the innermost sanctum of a distant tower. The sorcerer apparently has a fetish for ancient RPG tropes, as he also has posted a fearsome dragon to guard the damsel. After hearing the king's disheartening tale, you vow not only to slay the dragon, but to rescue his daughter and restore peace to the kingdom.

At this point, I predict that a vast portion of gamers will toss the controller away and flee from Faria, terrified of what they should have expected all along: unoriginality. While normally I would wag my cane at these whippersnappers and curse them for their prejudice against older games, in this case I consider those that flee to be the lucky ones. There are worse sins a game can commit than unoriginality, after all, and Faria commits a number of them. 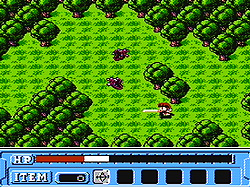 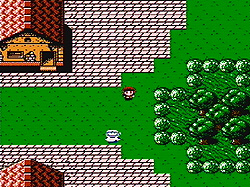 I was one of the few who said Rustic adventures in 8-bit land? Sign me up! I had the privilege of witnessing the games horrors firsthand as I eased into my standard early game ritual of grinding for gold and experience. As I engaged in my first random encounter, Faria unveiled a pleasant surprise in the form of its battle system. Where I had expected familiar turn-based combat, the game instead segued into a single-screen environment with monsters roaming the premises, a la The Legend of Zelda. With a few choice pokes, I stabbed a lounge full of blue Gila monsters to death and marched to victory. After a few easy battles, I was beginning to feel comfortable with the game and confident that I had stumbled upon a rare gem in the NES library. That feeling lasted until I bumped into a hulking red death-beast that nearly cleaned my clock. I escaped from the battle and thought, "What the hell was something that powerful doing in a field at the beginning of the game?"

Idiotically, I decided to venture into a forest to see if the foes there were any worse. There I met two ironclad giants with massive swords, joined by an invisible wizard who drained my HP with a couple projectile shots. I didn't even have time to react before the blasts landed. Even if the wizard hadn't been there, I wouldn't have stood a chance against the enormous knights, as they would later destroy me time and time again. With each death, the game left me wondering why the developers thought it was a great idea to position such powerful enemies within the vicinity of the game's very first village. My only guess was that they didn't know how to maintain a decent challenge factor without overloading players.

The unbalanced difficulty helped create quite the conundrum when it came to farming gold pieces. As it turned out, the game wasn't awarding me cash for winning battles. Instead, each defeated monster had a chance of dropping an arbitrary amount of gold, which was more problematic and irritating than the tried and true system employed in other games. I sometimes killed scores of monsters without receiving a single coin, and often defeated tough nemeses only to obtain two measly gold pieces. Other times I defeated single-hit bugs that dropped around twenty gold pieces each, although such instances weren't as common as those where I obtained little to nothing. What exacerbated the situation was that anytime I died, which happened frequently thanks to the intermittent appearance of high-powered monstrosities, my cash supply was halved. 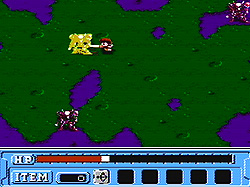 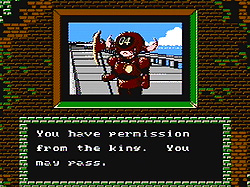 You might suppose I could alleviate this issue by escaping from grim encounters. Thankfully, Faria provides players with a 100% escape rate, so there was never an instance where I "failed to flee." Unfortunately, the cost of escaping is sometimes worse than dying, as the game randomly docks some gold or experience points after each retreat. In one case, I even lost a pricey piece of chainmail armor that I'd worked hours to obtain. The prospect of losing equipment turned me off not only to escaping from combat, but to the game itself. It was as if the developers didn't care about a balanced difficulty system and only wanted to piss off gamers.

The ridiculous setup Ive just described prompted me to spend hours saving up for a mere 400 gold just so that I could procure an iron sword in the campaigns early phases, a process that involved a lot of saving and reloading. Grinding, a basic facet of RPGs, should never be this complicated or frustrating. That's why it's called "grinding."

Despite such a rough start, though, I still wasn't ready to write the game off completely. It wasn't impossible to play, after all. After I boosted levels, I noticed a slow improvement in my character's battle prowess. I stayed the course as a result, only to find that the rest of the game was also disappointing except for the opposite reason. Instead of finding the game too difficult, I eventually found it far too simple and uninteresting. For instance, exploring the games world didnt entertain me because it consisted of only four or so basic continents. Each continent so lacked the mass and interesting twists that make a world worth exploring. Instead they seemed to form a thin, conspicuous rail that was a far cry from the impressive and sometimes confusing worlds featured in superior RPGs released around the same time. In a way, Faria's overworld existed not to promote exploration or immerse its players in a fantastical realm, but merely to carry them from one town or dungeon to another.

The game's dwindling difficulty extended beyond its overworld design. Right after completing the first dungeon, not even halfway through the game, I found a shop that contained the second most powerful sword. This blade was so overpowered that everything, including bosses and those pesky giant knights, easily fell victim to its might. While this blade dulled the frustration factor of grinding, it also stripped the game of any challenge. This weapon even reduced some of the game's convoluted and drawn out dungeons to veritable slaughterhouses, which added to the tedium of navigating them. That I found such a powerful weapon so early spoke volumes of the games careless design, more even than the previously discussed grinding complications and the game's world design. 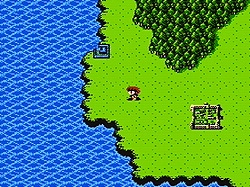 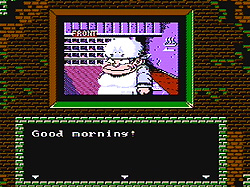 Faria should have charmed me with a cute fantasy world and antiquated (but loveable) RPG concepts. Instead, it bored me with unoriginality and frustrated me with its poor implementation of challenge, only to bore me in a different way once the challenge abruptly vanished. It may not be the worst RPG I've played, even on the NES, but fails to prove even mediocre in the end. The game's saving graces are its simple battle system and a few decent dungeons. Unfortunately for Faria, dozens of superior RPGs offer the same perks with fewer flaws. In other words, there's no reason anyone should be made to suffer through this sloppy title.
1.5/5

If you enjoyed this Faria review, you're encouraged to discuss it with the author and with other members of the site's community. If you don't already have an HonestGamers account, you can sign up for one in a snap. Thank you for reading!

© 1998-2020 HonestGamers
None of the material contained within this site may be reproduced in any conceivable fashion without permission from the author(s) of said material. This site is not sponsored or endorsed by Nintendo, Sega, Sony, Microsoft, or any other such party. Faria is a registered trademark of its copyright holder. This site makes no claim to Faria, its characters, screenshots, artwork, music, or any intellectual property contained within. Opinions expressed on this site do not necessarily represent the opinion of site staff or sponsors. Staff and freelance reviews are typically written based on time spent with a retail review copy or review key for the game that is provided by its publisher.