The other night, I had two friends visiting me at my apartment for the purpose of some competitive gaming. We played a lot of games that evening, and we chose to end the uncommon event with an hour or so of Game Party Champions on Wii U. The time we invested turned into more like two hours--miserable, grueling hours where no one had much fun--and yet somehow we remain friends. I guess trauma really does bring people together, like they say.

Game Party Champions is a bad game, but it didnt have to be. There are eight mini-games to experience: baseball, football, hoop shoot, mini golf, ping pong, skill ball and water gun. The Wii U offers hardware that should make it a simple matter to emulate the fun you can have at a local recreational center. The way I saw it, developers would have had to work diligently to make a mess of such a simple concept. Imagine my surprise when my friends and I discovered that the people at Phosphor Games Studio were quite capable of doing precisely that. Apparently, I cant be trusted with $50. 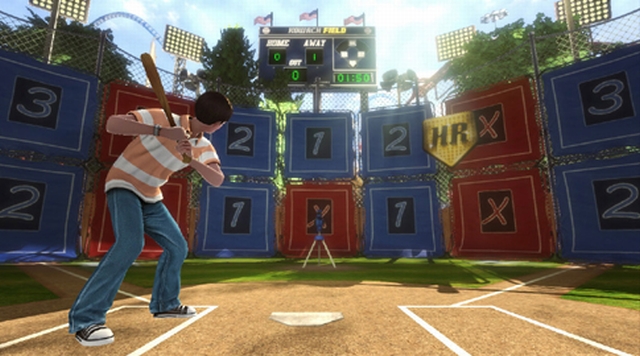 There are several modes available in Game Party Champions, including a Free Play option that grants convenient access to all of the offered attractions. For the most part, though, youll likely invest your time in either the Party Mode or the Story Mode (with the latter being the one youre supposed to play to unlock everything).

Story Mode is an absurd idea, of course. The story is that you are a lazybones ever since your father died, and your friend Jace hopes to turn your life around by forcing you to participate in a tournament at the local arcade and amusement park. If you can win all the games, he reckons, your life will finally get back on track. So he challenges you to air hockey, and when that is done--whether you win or lose--the two of you head to the arcade, where you can choose from four of the eight events. If you defeat the boss characters there, you can then advance to the amusement park, and then from there to a championship event.

It can be difficult to take the Story mode seriously, and not just for the obvious reasons. The concept might have succeeded in spite of its inherent goofiness, except the character models in the game dont quite come across as believable. Eyes and noses dont seem to go together, and your friend wears a sweater with a zipper that looks like it was awkwardly fashioned out of oversized LEGO blocks. Some of the other character models look decent--if they dont move much--but overall theres not a lot to like. Perhaps the nicest touch is the background imagery, which includes peeks at old Midway arcade cabinets. Alas, you cannot play those classic games. They exist only to taunt you. 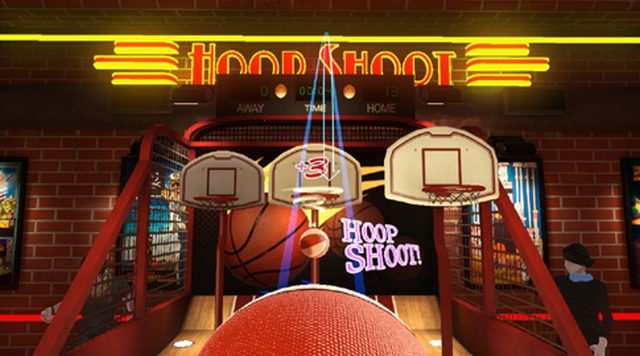 Advancing through Story Mode requires you to beat an event five times. Each time you are successful, the difficulty level is bumped up a bit. Sometimes thats welcome, but mostly its annoying because you just want things to finally be done so you can advance to another set of challenges. Eight mini-games actually doesnt offer a lot of variety, particularly since a number of them are quite similar. Failure also can be frustrating, both because you have to waste your time with another attempt, and because sometimes the load times between each attempt suck up as much time as the events themselves (plus if youre facing a special opponent, you have to listen to his or her trash talk before each attempt and that can last 10 or 15 seconds). Its ridiculous just how much time youll spend waiting for the simplistic games to load, really. Perhaps the culprit is the thoroughly unnecessary use of Unreal Technology, or maybe the programmers just arent particularly adept. Whatever the case, the technical deficiencies on all fronts are unfortunate.

If you decide to forget about the Story mode because you have some friends over, like I did when I first played, then the Party mode had potential. It presents you with a board that you must navigate, sort of like you might if you were playing a game of Pictionary. You roll the dice to determine how many moves you get to advance, and then you must play one of the events using the gamepad while any other players sit back and watch. They can pick up Wii Remotes and press the A button to grief you (as if the mini-games werent already providing enough of that on their own), but otherwise other players are never directly involved. If you manage to win the event, then you get to stay where you landed after your roll. Otherwise, look forward to a trip back to your previous location. As you move along the board, you also get to pick which path to follow at a few junctions, which really just determines what games you get to play the most though you have to guess what color represents which event, since no icons are offered to help.

The eight included games in this package are shallow no matter which mode you play in, but thats especially true of the Party Mode versions. That particular mode features variants that are generally designed to be finished in a half-minute or less. Instead of needing to score a set number of points to win a match, you might play until the first point is scored, or you may have to beat a target score within 25 seconds. Unfortunately, the difficulty setting seems to be decided at random, and a lot of the objectives can be unreasonably harsh (particularly if you havent already practiced the games by yourself). Thats why my friends and I wound up playing longer than intended on that first evening: it took that long just to reach the end of the board. 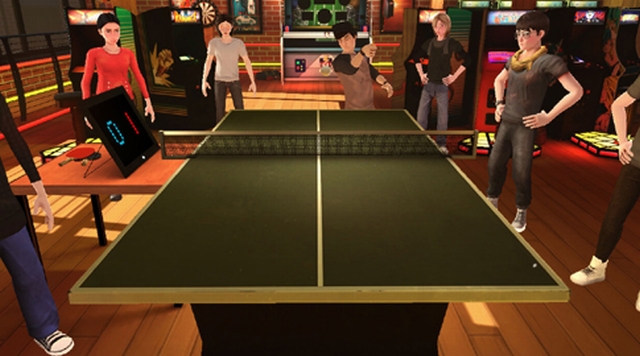 If the time that effort involved were the result of compelling gameplay, we would have been delighted. However, the game is more challenging for newcomers than the developers likely intended, mostly due to the control scheme. The game simply requires more precision from the touch pad than it allows. For instance, the Basketball attraction features three hoops that move toward the screen, then recede or spin. You have to move the gamepad to affect the direction your arrow points, and then you have to swipe the stylus just the right amount so that you throw the ball hard enough but not too hard. In mini golf, you hit the ball in much the same manner, but its too easy to hit it weakly or too hard. Theres not much middle ground. Then in air hockey, you hold the gamepad horizontally and it tends to be difficult to cover the whole area with your stylus. Each attraction has similarly awkward setups.

Even if you enjoy mini-games, as I do, Game Party Champions is a disaster. Only a couple of the eight games amounts to much more than a limited exercise in turning the gamepad a bit and swiping at it with your stylus. Controls are imprecise, the graphics range from functional to accidentally comical, and you can experience nearly everything the game has to offer in a couple of unsatisfying hours. The total package would struggle to satisfy gamers even if it were offered as a free smartphone download. As a proper retail release, its a $50 tragedy.
1/5

If you enjoyed this Game Party Champions review, you're encouraged to discuss it with the author and with other members of the site's community. If you don't already have an HonestGamers account, you can sign up for one in a snap. Thank you for reading!

© 1998-2020 HonestGamers
None of the material contained within this site may be reproduced in any conceivable fashion without permission from the author(s) of said material. This site is not sponsored or endorsed by Nintendo, Sega, Sony, Microsoft, or any other such party. Game Party Champions is a registered trademark of its copyright holder. This site makes no claim to Game Party Champions, its characters, screenshots, artwork, music, or any intellectual property contained within. Opinions expressed on this site do not necessarily represent the opinion of site staff or sponsors. Staff and freelance reviews are typically written based on time spent with a retail review copy or review key for the game that is provided by its publisher.