If there's one thing in gaming that's truly awesome, it's The Sequel That Gets It Right.

First, a company comes out with a game that has potential and is terrific in some aspects, but it lacks a bit overall. In the case of Rare's Donkey Kong Country, the Super Nintendo played host to an absolutely gorgeous platformer that just didn't live up to the (admittedly very high) standard set for that system by Super Mario World. It was solid and it tended to be enjoyable, but no new ground was broken and things could get repetitive. It seemed to be the ultimate in playing it safe -- a game that could have come with a disclaimer: "You've done all this before, but it's never looked this good has it?!"

With Donkey Kong Country 2: Diddy's Kong Quest, it's safe to say that Rares developers were through with the whole "testing the waters" phase, as they not only improved on the original, but managed to create one of the top platformers I've ever played. Some of the changes were subtle, while others were very noticeable, but they all come together to form a game that comes close to perfection. 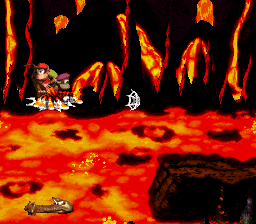 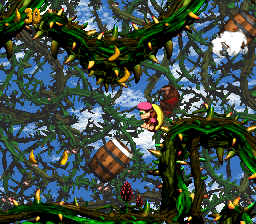 One of the games neatest aspects is the set of two ape characters you'll be controlling. In the first SNES game (and eventually the third), you'd have a big ape and a small one. There would be major differences in how the two controlled. The smaller one would be more nimble and better suited for levels in which nimble fingers and quick reflexes were necessary; however, it was weak and unable to take out the more powerful foes with the standard platformer attack of a head stomp. In those cases, the larger and more powerful ape reigned supreme.

Here, the large ape (Donkey Kong) has been kidnapped by series villain K. Rool and his loyal Kremlings, effectively taking him out of the equation. Spry sidekick Diddy returns, though, and is assisted by girlfriend Dixie Kong. Both are the same size and only possess subtle differences in how they control. Diddy can scale rope ladders more quickly, while Dixie can spin her hair like a helicopter to glide while jumping. Other than that, they're pretty much the same. They both need to find alternate ways to handle the most powerful enemies, but they're also both adept at wriggling through tight jams. This gives you two protagonists who are interchangeable most of the time, though you'll definitely prefer having one or the other for particular situations. An example is the battle with the fifth world's boss, where you'll be spending a lot of time scrambling up and across rope riggings while dodging gigantic eggs. With Dixie, parts of this fight are brutal; with Diddy, they're merely problematic and tricky -- much like how certain levels that require precise jumping are a bit easier with the female ape and her ability to glide and pinpoint landings.

The level design also took a big step up from the first game. After you get through the easy opening levels, you'll find that Rare put a lot of time into mixing and matching various ideas to create a ton of stages that share certain similarities, but wind up a lot different from their predecessors. In the fourth and fifth worlds, you'll go through three roller coaster levels. All of them are similar in that your apes will get onto a cart on a track and have to jump gaps and enemies as you progress, while occasionally performing trickier-than-average moves to get to bonus levels. However, the first such stage will have you hitting switches to open gates, lest you collide with them and lose lives. The second stage is built around a fun little challenge where you'll attempt to knock 10 of K. Rool's henchmen out of their carts in order to earn bragging rights. Move to the third one and you'll be trying to keep ahead of a lethal ghost. A timer ticks down as you attempt to run into barrels that increase that time and avoid those that subtract precious seconds. At a glance, the three stages are essentially repeats of the same sort of level, but there are enough differences that each one offers a unique challenge. 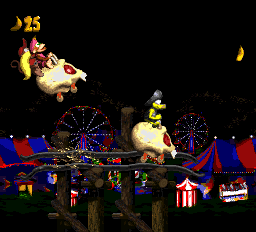 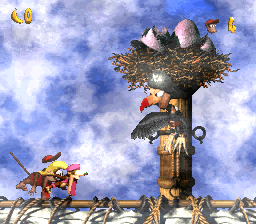 Rare doesn't seem to run out of ideas, either. You'll constantly be introduced to new mechanics as you advance through the game. It isn't until the sixth (and final full) world is reached that you'll see your first ice level -- a beloved (or despised) staple in this sort of game. The funny thing is that in this stage, you'll immediately go underwater and spend most of it riding on the back of a swordfish, one of the game's many animal helpers. The ice plays next to no factor other than making you think, "Ohit's time for one of these" before you're taken in a completely different direction. This means you'll be completely unprepared when, a couple levels later, the ice returns and you're not only forced to navigate it, but to do so at a fast pace before it melts and you plunge into the jaws of an unstoppable piranha.

Speaking of Enguarde the Swordfish, some of the first game's animal helpers return and a few new ones join the party. You'll find their boxes scattered throughout levels. Occasionally, they're only there to help you with a bonus area, but oftentimes entire levels will be built around their abilities. Youll need to navigate a maze of thorns with a parrot or build web platforms across gigantic pits with a spider. Or, in one of the very few missteps Rare makes, you'll ride a snake that bounces like a pogo stick during a frenetic ascent upwards while lethal slime floods the level. Rattly controls a bit awkwardly and the slime rises quickly, making Toxic Tower one of the very few cases where frustration outweighs the enjoyment presented by a tough, yet fun, challenge.

Or, I should say, "one of the very few MANDATORY cases". Getting to (and completing) all the bonus levels and finding the well-hidden DK Coins can be tough enough to induce a good controller-throwing rage at times. At least these extras aren't all about bragging rights and a higher completion percentage. The DK Coins might fall under that heading, but by completing bonus levels, you also get Kremcoins which are used to bribe an enterprising Kremling so that hell grant you access to five special bonus levels. Complete those and you'll unlock the final chapter to your duel with K. Rool, which serves as a fitting epilogue to the epic battle with him that otherwise ends the main game (and makes all the potential frustration involved in reaching that point feel worthwhile).

Donkey Kong Country 2 brings the goods so effectively that I can't punish it for the occasional "this isn't fun at all" moment that happens in places like Toxic Tower. Everything was improved on from the first game, sometimes by a substantial amount. Most of the boss fights in the first game were forgettable; the ones youll find here are challenging and memorable. Even better, there's not the same repetition to them. You might fight the ghost of the first world's boss in the fifth one, but the second confrontation is so much more complex and challenging that the two of them can't even be compared. There's a real purpose to collecting out-of-the-way items, as well. The levels are also more varied and the action is more challenging. To top it all off, the game is, if anything, more beautiful than the first -- which leaves me with a laundry list of reasons to recommend this game to anyone who even remotely likes this sort of thing.
5/5

If you enjoyed this Donkey Kong Country 2: Diddy's Kong Quest review, you're encouraged to discuss it with the author and with other members of the site's community. If you don't already have an HonestGamers account, you can sign up for one in a snap. Thank you for reading!

© 1998-2020 HonestGamers
None of the material contained within this site may be reproduced in any conceivable fashion without permission from the author(s) of said material. This site is not sponsored or endorsed by Nintendo, Sega, Sony, Microsoft, or any other such party. Donkey Kong Country 2: Diddy's Kong Quest is a registered trademark of its copyright holder. This site makes no claim to Donkey Kong Country 2: Diddy's Kong Quest, its characters, screenshots, artwork, music, or any intellectual property contained within. Opinions expressed on this site do not necessarily represent the opinion of site staff or sponsors. Staff and freelance reviews are typically written based on time spent with a retail review copy or review key for the game that is provided by its publisher.