Doomsday is nigh. As has been foretold, a fish-headed demon is heading towards Earth with an insatiable appetite for astronomical objects. Realizing that they are defenseless against the devil, the citizens of the world have resigned themselves to their fate. Little do the Earthlings understand, though, that they are not without a chance at salvation. For you possess a curious talent in creating golem-like entities that can incorporate various stimuli into themselves, from paperclips to household pets, by merely touching them. As your servant accumulates objects, it grows to mammoth proportions capable of snatching up people, vehicles, houses, and even whole skyscrapers. The more objects you amass, the more of the world you save from demonic digestion.

But wait, haven't we been here before?

The stone cold truth about The Wonderful End of the World is that it's a major knock off. Not only does the game pilfer Katamari's mechanics and rules (collect as much as you can within a time limit), but it also appropriates Katamari's adorable and vibrant presentation. You'll witness this robbing first hand as you plow through familiar locales like a shopping mall, a neighborhood, and a massive urban setting. Throughout the stages, you'll snatch up many of the same cute animals, frazzled citizens, household objects, and mythological monsters, while only noticing minor differences (such as Wonderful End's strange obsession with orangutans). Thanks to these similarities, the game plays more like an unauthorized expansion pack than a standalone title. Some would argue that the game was meant to be more of an homage. I'm fine with that, but I find it difficult to believe that the developers at Dejobaan Games couldn't have found a more subtle way to pay tribute. They could have easily utilized a variant art style, maybe even altered the mechanics slightly to incorporate concepts from other genres like shooting or platforming. Instead, the only modification they made was to the structure of the collector. Rather than a ball, it's a humanoid. The only advantage this imparts unto you is that you no longer have to fret over momentum. Big whoop.

You're probably not solely interested in the game's presentation. You've likely been thinking up to this point, "Right, but how does it play?"

If there's one thing I appreciate about Wonderful End, it's that you don't have to play an entire campaign to experience certain levels. Instead, the game allows you to select stages and modes of play as you unlock them. This bumps up the game's value, as there are a few entertaining levels. One of my favorites, for instance, is called "Aracadia," which is a stage devoted to various arcade game references. I got a kick out of snatching up the titular foe from Centipede, stealing a few Tetris pieces, and even swiping the bikes from Tron. There are a few other enticing stages, like one built of words and letters and another formed entirely of rice cakes of various sizes and shapes. 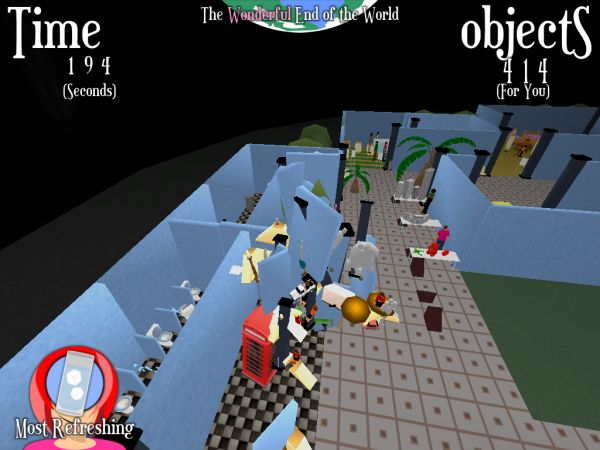 As you complete stages, you obtain grades based on your performance. By obtaining high marks in certain stages, you can unlock other levels and new modes of play. Ideally, a system like this would have you play levels until you master them, thereby adding some longevity to the game. Unfortunately, attaining impressive marks isn't at all difficult. In my playthrough, there were only two occasions where I didn't receive at least an 'A-' in my first attempt, and never obtained a failing grade. By the end of the game, which took about three hours between two sessions, I had 'A' grades and higher in all but one stage, where I received an 'A-.' Don't think for a second that I'm a brilliant Katamari player, either. I experience my share of "game overs" and failures when playing Katamari, yet I found it nearly effortless to achieve near perfection in Wonderful End.

Part of what kills the challenge factor is that the stages are humble in size. Because of this, most of the items are grouped together, with few large spaces in between groups. Collecting is incredibly efficient, allowing you to grow quickly and nab larger items with little to stymie your progress. This makes for quick, fast-paced levels, but sadly means that stellar grades are a cinch.

You may not truly realize how diminutive the levels are until you unlock 'no time limit' mode, though. From there, you can jump into the most massive stage, The Megalopolis, and complete it in no time. Even with all of the tremendous buildings, huge mansions and whole neighborhoods, it should only take you five minutes to gather everything. From there you can get a stellar view of the arena, where you'll realize just how small of stature and limited the level is, as it's confined to a basic square that serves as an island. 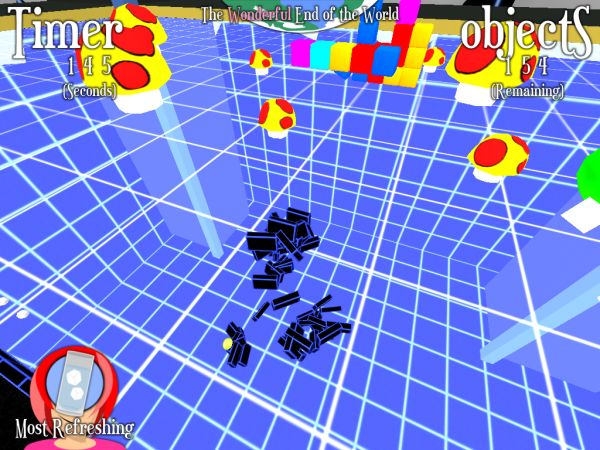 With lacking difficulty, puny stages, and low standards for unlockables, it shouldn't take you long to achieve everything and grow tired of the experience. Toss in the game's unoriginal presentation and you might feel as I did, wishing you had invested the three hours you spent playing this game on something more interesting and entertaining. This isn't to say that The Wonderful End of the World is awful. Rather, it's a relaxing casual title that sadly offers a scant amount of content that would have been palatable had it been more creative.
2/5

If you enjoyed this The Wonderful End of the World review, you're encouraged to discuss it with the author and with other members of the site's community. If you don't already have an HonestGamers account, you can sign up for one in a snap. Thank you for reading!

© 1998-2020 HonestGamers
None of the material contained within this site may be reproduced in any conceivable fashion without permission from the author(s) of said material. This site is not sponsored or endorsed by Nintendo, Sega, Sony, Microsoft, or any other such party. The Wonderful End of the World is a registered trademark of its copyright holder. This site makes no claim to The Wonderful End of the World, its characters, screenshots, artwork, music, or any intellectual property contained within. Opinions expressed on this site do not necessarily represent the opinion of site staff or sponsors. Staff and freelance reviews are typically written based on time spent with a retail review copy or review key for the game that is provided by its publisher.