In case you're wondering, yes, the Assassin's Creed series is still about a bartender in 2012 saving the world from imminent destruction by reliving the exploits of his ancestors at the behest of cybergods. We're now five entries deep into this purported trilogy, and it's difficult to imagine anyone having made it this far without being 100% on board with the whole thing. That's good for Ubisoft, who staked a lot on the idea that players want to see the Desmond story concluded, that we're all curious to find out what four games' worth of buildup has been leading to.

That Assassin's Creed III is so story-driven makes it leagues better than last year's Revelations almost by default. Now that we're no longer treadmilling on Ezio flashbacks, we can finally push the modern-day conflict forward and give Desmond's side of the plot some closure, for better or worse. (Mostly worse, but I'll get to that in a bit.) And in the Animus, we can, at long last, move on to a new setting, which is a big deal if you understand what a major role setting plays in this series. It's not just about climbing things; it's about admiring gorgeous historic locations and watching an audaciously goofy sci-fi conspiracy unravel in them. And for a series about bucking authority, Colonial America couldn't be a more fitting backdrop. The ominous drums of patrolling redcoats echo throughout Boston and New York, and it's amazing how something as seemingly minor as a period-specific sound cue can instantaneously make you think, "An Assassin's Creed game set during the Revolutionary War? How has this not happened yet?"

Whereas Ubisoft had previously been overplaying the Renaissance card to such a degree that even Istanbul felt like the same old thing, the move to the New World gives the franchise a sense of freshness that's been missing for years. If Revelations was the pointless, cynical product of a publisher that views Assassin's Creed as an annual money machine, this latest entry redeems the series from an artistic standpoint. 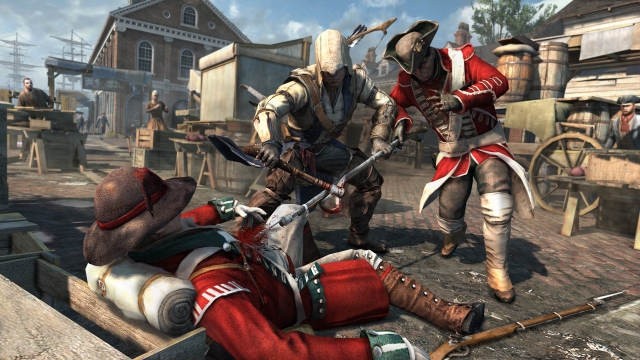 It's disappointing, then, that so many of the issues that have haunted the franchise for years continue to go unaddressed. How is it that a series with such a strong emphasis on stealth can keep playing host to such awful stealth mechanics? Espionage by way of gravity-defying master assassin is a great idea, but here, it's an unholy union of annoyingly imprecise controls and AI behavior that frequently makes no sense. And at this point, should we give up on the combat ever being improved? Ubisoft had previously been setting their sights on making the action "more painless" rather than better, peaking in Revelations, in which you were given the option to simply vault over enemies, bypassing encounters entirely. In Assassin's Creed III, the combat's as clunky as ever, and yet the guards are more persistent, their search radii have widened, and hiding spots are far tougher to find. I'm getting sick of having the things I love about this series near-constantly getting interrupted and bogged down with this stuff.

That love/hate relationship has always been prevalent with Assassin's Creed, even when the series' massive quality spike at the second entry made its shortcomings so much easier to endure for a while. Those occasional instances in which the controls betray you make it more difficult to enjoy the many long stretches of game time in which everything falls into place, when Assassin's Creed III's open-world parkour platforming is a marriage of intricate level design and seamless animation that would make similar products like Crackdown and Infamous blush. Yet every time you're aggravated by an irritating flaw that still hasn't been fixed, you're reminded seconds later that there's really nothing else in the industry quite like this. Assassin's Creed III is frustratingly engaging, and in that regard, nothing's changed.

What has changed is that, for once, all of this feels like it's beside the point.

A telling moment comes over halfway into the campaign when players are finally taken to New York, and an entire chapter goes by before they're allowed to break free of mission constraints and actually explore the damn thing. What's even more telling is that I wasn't upset by this. Every time I was dropped into a new location in the previous games, my first order of business was to climb buildings, find viewpoints and curse those big white Animus walls for limiting where I was allowed to go. Assassin's Creed III, on the other hand, is so intensely story-driven  and so successful at telling said story  that by this point, I was no less than fully absorbed. 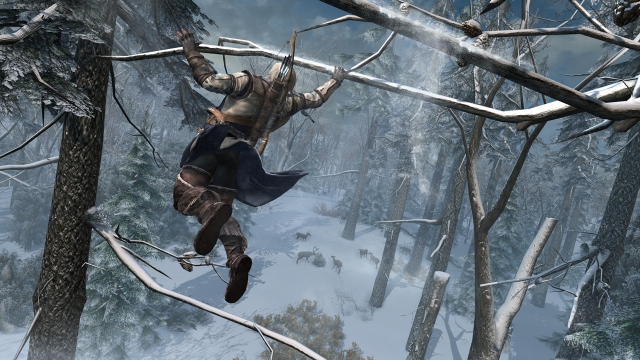 That's not to say that the exploration element isn't here. A few areas have been trimmed  viewpoints aren't as useful, and renovations have been more or less removed  but between two cities and a massive outdoor frontier area, Assassin's Creed III presents us with arguably the series' biggest and richest world to date, yet it plays so small a role in the actual campaign that if you were unfamiliar with the series, you'd think Ubisoft shoehorned an admittedly expansive sandbox component into a linear action game that didn't call for one. They're far more concerned about the scripted stuff. The game's pretty set piece-heavy, with a number of novelty sequences in which you're commanding soldiers, taking cover from cannon bombardment, and so forth. There's also a newfound emphasis on naval warfare, which mostly works, if only for how authentic the ship handling feels.

You may have heard that the game's prologue is outrageously long. That is correct. Our protagonist is a Native American named Connor Kenway, but the first couple of hours are spent in the shoes of a completely different character for the express purpose of easing us into the narrative. The payoff is there (and it will knock you on your ass), but your tolerance for the game's incredibly slow pace will be determined by just how taken you are by the plot itself.

I'm happy to report that Assassin's Creed III tells my favorite Animus story of the series so far. I'm surprised to hear myself saying that, because it took an awful lot of time for Connor to grow on me. He's less immediately likable than Ezio, and he initially follows many of the same story beats, with his character-morphing tragedy holding far less emotional impact (due partly to the voice actors, who audibly struggle with the Mohawk language). He's also far more complex, however, and his arc is less predictable. Whereas Ezio was an idealist's protagonist, Connor is more or less the guy you or I would be in this situation. His thirst for revenge drives him to make reckless mistakes on numerous occasions, and his personal agenda and commitment to the Creed are noticeably at odds until he's able to find middle ground between them.

Admittedly, a big part of the story's appeal for me was my familiarity with the setting  no longer having to constantly consult Wikipedia is a plus  but for as many historical figures and events as Ubisoft pulls from, they're merely a backdrop, playing second fiddle to character drama. It's noteworthy how un-showy this approach is. Connor doesn't single-handed win the revolution or anything of that nature; his struggle, in fact, is only tangentially related to the war. He does, however, undergo the biggest change of any Assassin's Creed hero to date, and watching that evolution was, to me, the story's biggest draw. Catching all of the clever ways in which Connor's one-man war against the Templars plays into the historical context is just the icing on the colonial cake. 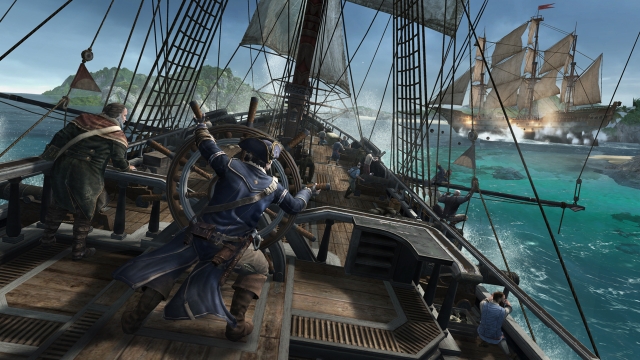 This wouldn't be possible were it not for Ubisoft's significantly refined storytelling skills, a feat of both the writing and their realization that something as small as a slightly raised eyebrow can tell us more than a script ever could. When you reach Connor's final confrontation with the game's central antagonist, pay close attention to just how human the scene is. I don't even think there's any dialog in it  just two characters telling several novels' worth of words with their eyes and body language alone. It's powerful, and made all the more effective by the fact that you'd never expect to find it here. Remember that one of the previous games in this series concluded with Ezio infiltrating the Vatican and having a fistfight with the Pope in what was essentially an alien stronghold. Assassin's Creed has been called many things; "subtle" isn't usually one of them. Here, it's warranted.

Unfortunately, Desmond's side of the equation doesn't live up to the standard set by Connor's, due largely to the ending. I don't mind the direction that the finale takes in and of itself, but Ubisoft's nonchalant depiction of what should be a momentous event gives it shockingly little weight, and then they cut to the credits as if the credits themselves just couldn't wait to crash the party. Five games' worth of setup and this is all we get? I'll grant you that the ending's implications open some potentially interesting doors for future installments, so perhaps I'll be looking at it in a different light a year from now, but taken as what's supposed to be the conclusion to the contained Desmond story, "underwhelming" doesn't even begin to do it justice.

But perhaps the most important thing is that I will be back for the next chapter, that despite all of the things Assassin's Creed has continually gotten wrong, it has not lost me. If anything, the fact that Ubisoft can now apparently pull off intimate character study makes me all the more intrigued with where they may decide to take the series from here. I can already defend Assassin's Creed III as everything you'd expect: wonky but ambitious, tiresome but utterly bonkers, formulaic yet unlike anything else on the market today. The coolest thing about it, though, is that while it aggravated me in ways I'd anticipated, it captivated me in ways I hadn't. Ubisoft should be embarrassed that they haven't sorted out some of the series' biggest issues yet, but as long as they continue finding reasons for me to keep coming back, I will.
3.5/5

If you enjoyed this Assassin's Creed III review, you're encouraged to discuss it with the author and with other members of the site's community. If you don't already have an HonestGamers account, you can sign up for one in a snap. Thank you for reading!