Before tearing into Frankenstein: The Monster Returns, I'll issue a warning: turn around, don't touch the cartridge, and instead insert Castlevania into your NES. If indeed you crave Gothic horror spliced with 8-bit action, then Konami's masterpiece and its second sequel are all you'll ever need. If you're unconvinced by my warning or insistent upon delving into this tragic piece, then I hereby counter your insistence with insistence of my own: hit the bottle until the room spins. I say this in the hopes that inebriation will add a much needed level of complication to this unfortunately simplistic adventure, much in the same way that drinking can toggle the difficulty setting on walking a straight line. The other reason for my recommendation is that an intoxicated mind might not notice the many missed opportunities that could sink it into a morose state. So please, grab your favorite brew and take many long, strong pulls, because you're in for a rough ride.

Drink deeply so that the straightforward level design will seem more complex. After a few bottles, you might not notice that this odyssey's whopping four stages consist of little more than walking to the right and occasionally punching basic foes. You might also fail to notice the seemingly random enemy placement that does nothing to remedy the chore-like stage setup. Try playing sober and you'll find each stage sadly lacking in design, painfully vanilla and uninteresting. You'll sigh with every enemy encounter as you utilize the same strategies to a mind-numbing degree. For every pink minotaur you run afoul of, for instance, you'll execute the same flying kick that dropped the first such beast. A slightly more intricate design would allow for trickier scenarios, thereby conjuring greater side-scroller skills that beg you to be more mindful of your surroundings. In other words, you'd find the experience more engaging. Drink up, though, and you won't mind the lack of engagement.

I'm sure I'll get an email explaining that the levels were intended to be plain so as to emphasize Frankenstein's boss rush structure. I might as well admit that the boss rush approach is one of the game's strongest features, with each stage sporting multiple boss encounters. Take stage one as an example. There you'll slay a menacing water dragon in the sewers, tangle with a teleporting reaper, match aerial skills with an enormous bat, and go head-to-head with a demonic centaur named Demon Horse. The horrific beasts don't stop there. Chop your way through the woods and you'll meet the seductive Medusa, and push past a throng of possessed armor suits and you'll cross paths with an aberrant severed head called Gatekeeper. Many of the bosses are fittingly grotesque and awesome to behold, so much that you'll wish you could battle them in a superior game. 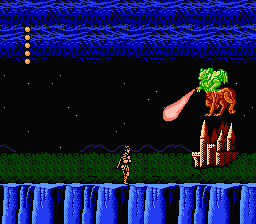 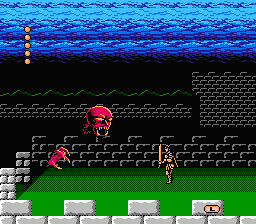 Sadly, this is where you take another pull of lager and realize the cold, harsh truth about the game's boss rush nature. While bosses are great in number and fearsome in visual design, they're lacking in terms of challenge and pattern. No matter how fiends move about the screen, you can dispatch most of them through constitution, tossing out planning, timing and skill in favor of all out aggression. In many cases, like a scrap against a werewolf in the final stage, that's the preferable method for victory. Those you can't power through, which are mostly flying bosses, can be easily taken out with rudimentary timing or projectile attacks. What we're left with is a slew of boss battles are so dull that they demean smaller features that would otherwise be neat additions. Never mind the many clubs and maces you can acquire, because with all around stale combat and boring bosses, they add nothing to the game. This also means that sacrificing complex level designs was for naught.

This isn't to say that the bosses are entirely easy, though. As it turns out, some members of our rogues gallery have one last secret weapon in the form of faulty collision detection. With it, they aim to not only evade injury but frustrate opponents into making mistakes. You'll realize this as you send a flying kick to Demon Horse's face, only to soar past him and into a tongue of fire protruding from his mouth. An even worse case involves fighting Medusa's second form, which is a giant disembodied head that floats back and forth. Despite this form's gigantic sprite, it has a minuscule hit box in the middle of its forehead. Nailing it squarely can take a few tries, and constantly missing leads to elevated rage and consistent slip ups. Fret not, though, because boosting your blood alcohol content is the perfect counterattack, especially if you're a mellow drunk. Perhaps then you'll be too distracted by your clunky thoughts to register that the game is robbing you. 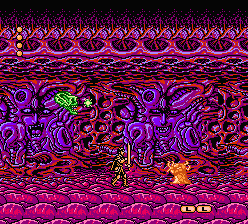 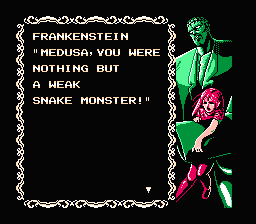 The madness culminates in a final stage, set in a hellish alternate dimension, where you'll discover the only worthwhile battle against Frankstein's monster (idiotically named "Frankenstein"). It's at the stage's climax that you'll encounter an overgrown nude Frankenstein complete with detachable head and hand. As if those nuisances weren't enough, he also tosses countless fireballs in your direction, threatening to send you to a painful incinerating death. If you've gotten this far, then it's best you put the drink down. This fight is tough enough when you're sober.

That one epic battle, though, is hardly worth pushing through four stages of tedious content, the likes of which raises questions about Bandai's motivation in developing this title. My guess would be that they cranked out a simple action game for a quick buck and tacked Frankenstein on as a means to associate their product with something familiar. Since it's a public domain IP it wouldn't cost the developers a dime, so there was little risk involved with using the license. That's only speculation, though. Whatever their reason, the finished product is a ho-hum action title unworthy of your valuable time and brain cells. Skip it and read the original novel instead.
2/5

If you enjoyed this Frankenstein: The Monster Returns review, you're encouraged to discuss it with the author and with other members of the site's community. If you don't already have an HonestGamers account, you can sign up for one in a snap. Thank you for reading!

© 1998-2020 HonestGamers
None of the material contained within this site may be reproduced in any conceivable fashion without permission from the author(s) of said material. This site is not sponsored or endorsed by Nintendo, Sega, Sony, Microsoft, or any other such party. Frankenstein: The Monster Returns is a registered trademark of its copyright holder. This site makes no claim to Frankenstein: The Monster Returns, its characters, screenshots, artwork, music, or any intellectual property contained within. Opinions expressed on this site do not necessarily represent the opinion of site staff or sponsors. Staff and freelance reviews are typically written based on time spent with a retail review copy or review key for the game that is provided by its publisher.