This one time, I tried playing through Borderlands 2 alone. It didnt go particularly well. I wandered around a lot, ran from one quest marker to another like a headless chicken. I shot some enemies, ducked behind cover when things got a little too crazy, then emerged to shoot some more. The experience as a whole felt mostly stale, slow-paced right up until the moment everything blew up in my face and my character was down for the count.

Borderlands 2 is not really a game that you should play alone, but thats perfectly fine because you probably wont have to. You can team up with a friend, either locally or online. If you like, you can bring along as many as three friends and all four of you can work toward your shared goals.

Its amazing how fantastic Borderlands 2 becomes when you play it the way it was so obviously meant to be played.

If you play Borderlands 2 by yourself, youll still explore a dusty wasteland, traverse canyons blanketed in snow, cross swampy basins, infiltrate futuristic settlements, and climb around on dilapidated shanties. The sights and sounds dont change. Youll battle the same bosses and hear the same lines of dialog. Chests will still render loot, and youll head back to a hub area known as Sanctuary when it comes time to upgrade your character and seek out new quests, whether a friend is journeying by your side or not. 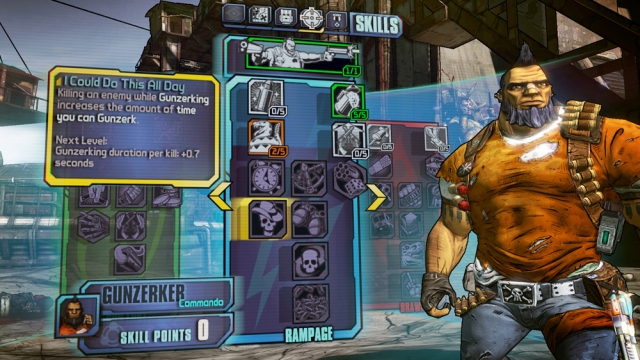 The multiplayer mode adds subtle complications, though. Enemies put up more resistance, of course, and youll find more guns, shields, grenades and class modification items. Most importantly, the battles play out like a proper team exercise instead of a dull grind. Two guys can rush an armored enemy head-on and the other two can flank that same adversary. You can revive a fallen friend, as well, and you can take more chances yourself because theres a safety net. Or two. Or three.

When four people are playing, the battles in Borderland 2 are a thing of chaotic beauty. Thats doubly true if party members diversify and use characters from unique classes. Early on, it seems like most people are going with the Siren class. I almost made that choice myself. But my friend was planning to play as one, so I went with a Gunzerker instead. Meanwhile, another close acquaintance was leveling a Commando as his primary character. I would charge into battle as a mobile meat shield, soaking up bullets and firing a constant stream of live ammo at whatever mutant or bandit came across my path. My Siren friend would catch a foe and toss him into the air, then let him hang there while everyone else emptied clips and ensured that the victim never got to walk again. Meanwhile, the Commando was usually running up ahead and deploying gun turrets that cut various creepy crawlies to shreds.

In a multiplayer game, kills grant experience points to everyone in the vicinity and every cash pickup benefits the whole team. Theres no bickering over the stupid stuff as a result of that common sense approach. Instead, you can argue with your friends over who gets what guns. There are an insane number of guns in the game, and they grant some nice boosts to the damage you inflict. Your character cant equip weapons that are too powerful, though, so theres always motivation to level grind together with friends, and to set up impromptu weapon swaps when youre meeting up after playing in separate parties with other chums. Almost as if by accident, Borderlands 2 becomes a very social game.

Character progression is a more personal gameplay element, yet somehow still social because youll want to take your friends into account as you decide what skill tree to follow. Do you go for skills that let you revive fallen comrades, for instance, or is a more offensive approach the solution that works best for you? Its also important to consider changes that might make you self-sufficient down the road, in case you get separated from your friends. You also might not have your most powerful friends around if--as so often happens--one or more of them are busy leveling up separate characters. 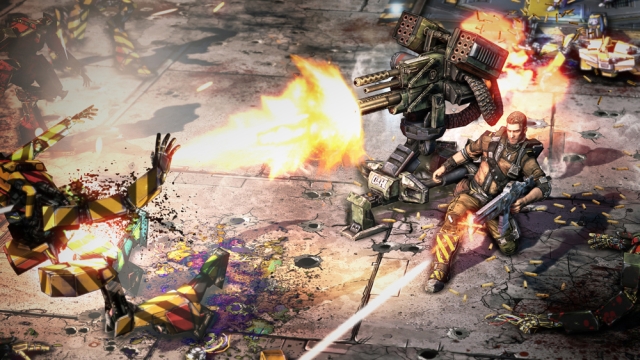 While most of the interesting things that Borderlands 2 does relate to its multiplayer dynamics, though, the core game isnt broken or even particularly weak. Youll likely want to keep playing just to see what funny thing happens next. Sometimes the humor can be subtle, like when youre fighting enemies and their names are nods to character names from popular films and games. Insider jokes are also common. Its dangerous to go alone, jerkwad, notes one vendor who gives you a weapon early in the game. He might not phrase his warning as nicely as the old man in The Legend of Zelda, but the sentiment is mostly the same and you get a weapon out of the deal, either way. Plus there are a bunch of silly conversations elsewhere in the game, like when an explosions expert wants you to go on a quest to find her badonkadonk, or a breed of monsters that temporarily is christened bonerfarts after more civilized names are recommended and rejected. Theres also the robotic robot companion that you meet up early in the game. His attempts at dubstep are spectacularly bad and his voice is annoying, two points that probably explain why I like him so much.

Perhaps my favorite of the games feature, though, is the ability that it grants you to fight for your life. Once an enemy drains your life meter and shields, its possible to gain a second wind if you manage to kill off a nearby foe before you lose consciousness. Instead of surrendering to not-so-sweet release, you have every motivation to go crazy with your weapons. If youre playing with friends, they also have more time to arrive by the side of your corpse in training and thus prevent disaster, though the feature definitely adds something even if youre on your own.

One final point I should really mention is that Borderlands 2 is massive. Ive been playing it a few hours a day for several weeks and only just recently reached the closing credits with my Gunzerker. There were still some unfinished side quests remaining, though (along with the option to run through again on a higher difficulty setting), and there are three additional classes for me to master in the core game. The developers at Gearbox are also keeping the add-on content flowing. A new character class (the mechromancer) is already available, and a first proper expansion is set to arrive later this week. There are an easy 40 or 50 hours of play here even if you dont buy anything extra, and probably a lot more if you really get hooked.

As you will have gathered, then, I like Borderlands 2 quite a bit. I just dont recommend playing it alone when the alternative is so awesome.
4.5/5