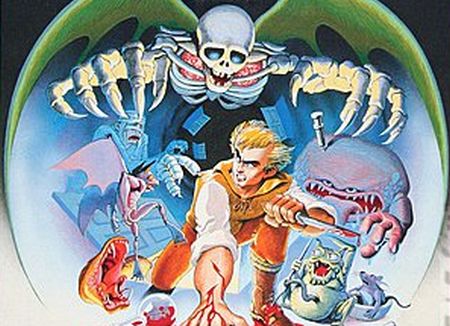 "Man lives in the sunlit world of what he believes to be reality.
But there is, unseen by most, an underworld;
a place that is just as real, but not as brightly lit.
A dark side. . . ."
-Tales from the Dark Side opening passage

Part I: The Agony!

Michael's brother, the brilliant yet eccentric Dr. Chaos, made a remarkable discovery. Through years of experimentation with quantum physics and concepts relating to alternate universes, he finally penetrated the visible realm we call reality. Beneath the world we know lies a devious expanse populated by savage beasts and ruled by a malicious entity known as Canabrian. The doctor, whose intentions were noble, could not seal the portal quickly enough. Canabrian spirited him away and set its minions loose in our world, first instructing them to conquer the doctor's mansion. From there, they would destroy the borderline between realities and create a unified dark universe.

It would have been a perfect scheme were it not for Michael, who had just arrived at his brother's abode. Blade clutched firmly in hand, he charged into the mansion and sought out the entrance to the Stygian dimension in the hopes of recovering his sibling and smashing Canabrian's plans.

As I read Dr. Chaos's premise, I grinned fiendishly. The prospect of entering what sounded like a playable Stewart Gordon film caused my horror-loving heart to flutter and sent images of my hypothetical playthrough racing through my mind. I saw myself running through the long corridors of Chaos's mansion, chopping down impish ghouls and exploring the house's numerous rooms. Therein I rifled through various closets and cabinets, snatching hidden weapons like pistols and grenades before moving on to the sinister warps and their intricate stage designs. 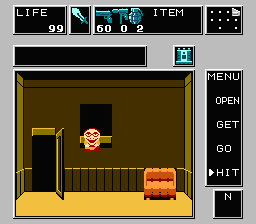 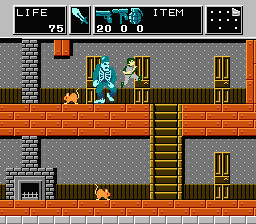 When I arrived home and started up Dr. Chaos, I learned that for every title there are actually two games: one built of my expectations that exists solely in my mind and the actual game. Initiating the latter punched through the weak fabric of the former. Beneath the atmospheric Lovecraftian experience the game presented itself to be stood a title rife with an ill-fitting color palette and idiotic enemies. Where I had imagined hallways crawling with demons, I instead saw a brightly colored mansion overrun by poorly designed rats and bats. Now and then I'd run afoul of Frankenstein's monster donning a dorky bowl cut or the lovechild of Humpty Dumpty and the Lemonheads mascot with an overly happy smile upon his mug. Instead of a video game adaptation of From Beyond, I was now knee-deep in Fischer-Price's My First Horror Game.

Although its presentation did not measure up to my expectations, the game wasn't completely unlike what I had dreamed. Mechanically speaking, it was very similar to what I had imagined. Because of this, I wasn't frightened away by the awful visuals. I also knew that there was more to Dr. Chaos than the poorly colored mansion, and all I would have to do to experience the true game was locate a device that warned me when I was near a closet, window or cabinet that held a warp zone entrance.

So I scoured the manor for hours, opening every door and wardrobe, locating as many hidden rooms and secret passages to the attic and basement as I could. Nothing doing. At one point I thought I would never find the device, and that was when an awful notion occurred to me. What if it was inside the warp that I would have to chance upon via process of elimination? Remembering that the house contained hundreds of possible access points took the wind out of my sails. I shelved Dr. Chaos after that and put it out of my mind.

Months later, I popped Dr. Chaos into my NES, having forgotten about my previous woes. I didn't consider turning this session into a project, as all I wanted to do was mess around. I ran about the house, engaging the first-person mode that initiates as you enter a room and opening various windows and closets. From my command list, I selected "ENTER" and attempted to walk through the portals I had opened. A pissed off HOOOOONNNKKK! would sound and the words NO WAY! would appear at the top of the screen. I did this for about fifteen minutes, delighting in the obnoxious admonition the game gave me every time.

At one point, I "ENTERed" a random window and expected the horrible honk. Instead I met a disturbing silence and read a new message at the top of the screen: HERE WE GO! I realized then that I wouldn't be confined to enduring fruitless searching, battling childish enemies, and amassing a superfluous stockpile of ammo. I had entered the true Dr. Chaos, the game beneath the game. Shit just got real.

I found what I thought I had been pining for within the alternate dimensions. There I saw a sunless world where skulls rained from the sky, amorphous blobs roamed the land, and enormous disfigured skeletons were apex predators. I skipped into this nightmarish wonderland, navigated basic platforming scenarios, and fought off various skeletal monstrosities. I ended my time in this malevolent playground with a simple monstrous boss battle, securing part of a gun, which I would later use to defeat Canabrian, and obtaining the aforementioned warp locator. Finally, things were looking up. 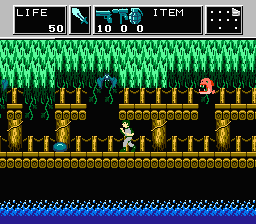 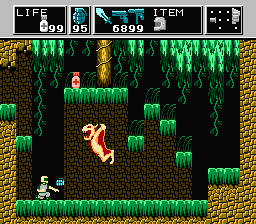 I discovered that half the excitement of Dr. Chaos was exploring the intricate mansion to uncover all of the warp entrances and rationalizing what order to play them in. No longer was I slogging through a tedious adventure title, but was now fully engaged in a quasi-Metroid experience complete with special items that allowed me to overcome various impediments. I procured special boots that heightened my jump, put on a helmet that prevented me from drowning, and even found a few vials that increased my maximum health. The more equipment I obtained, the further I advanced, and the more wretched bosses I put to rest, ranging from an undead wyvern to a vicious hybrid trilobite/lich. Unfortunately, progress also led to realizing that the game beneath the game still wasn't all that great.

I had never noticed how awkward the title's play control was until I put them to the test against the alternate universe. There I witnessed sluggish leaping speeds and the irksome knock-back that resulted from touching enemies. Worse, they could continually rain cheap blows on me while I was being knocked back. However, I took this as a much needed element of difficulty, as one of Dr. Chaos's vilest sins was its lacking challenge factor. Although finding the levels was difficult, completing them was not. Each one was a collection of simple set-pieces with mostly haphazard enemy placement, culminating in easy boss battles. At no point was I required to execute tough leaps or weave through a complex arrangement of platforms while worrying about a nearby winged skeleton. Everything was straightforward and obvious, and actually quite dull. Such vapidity brought down the experience as a whole and left me with a new unfortunate outlook on the game.

Like every new game I play, I entered Dr. Chaos with a sense of wonder and concluded it with regret. While not a horrible game, and actually enjoyable in some ways, Dr. Chaos is a title that never fully realizes what it should be. Just once I want to tear into a title that fully matches my expectations, but I'm sure that's an unreasonable wish. Sometimes what lies beneath the surface isn't so pretty.
3/5

If you enjoyed this Dr. Chaos review, you're encouraged to discuss it with the author and with other members of the site's community. If you don't already have an HonestGamers account, you can sign up for one in a snap. Thank you for reading!

© 1998-2020 HonestGamers
None of the material contained within this site may be reproduced in any conceivable fashion without permission from the author(s) of said material. This site is not sponsored or endorsed by Nintendo, Sega, Sony, Microsoft, or any other such party. Dr. Chaos is a registered trademark of its copyright holder. This site makes no claim to Dr. Chaos, its characters, screenshots, artwork, music, or any intellectual property contained within. Opinions expressed on this site do not necessarily represent the opinion of site staff or sponsors. Staff and freelance reviews are typically written based on time spent with a retail review copy or review key for the game that is provided by its publisher.