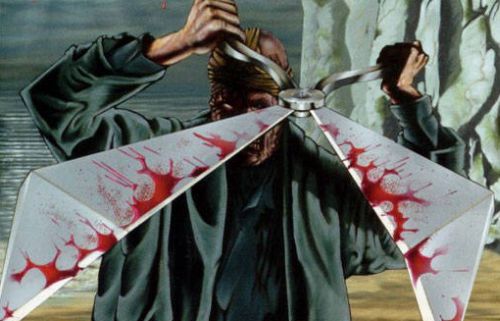 Few experiences can transform a mundane event like walking down a hallway into a terrifying, heart-pounding ordeal. After all, there's little tension to be found in sterile walls or doors leading to empty conference rooms, nor anything particularly frightening about linoleum floors or the tranquil stillness of a vacant building. All it takes is the addition of a single sound effect to complicate an otherwise ordinary situation. Imagine yourself walking down a quiet hallway, perhaps daydreaming, wrapped up in the concerns of everyday life. A simple sound breaks the stillness, ripping you from your reverie--shing...shing...shing...--and you think, "What the hell is that?" It draws closer and suddenly you feel betrayed by the silence, that it were only in place to instill a false sense of security so you could be caught unawares by a horrifying assailant, resulting in such terror and panic that your thoughts become a convoluted mess of what-should-I-do?s.

The door nearest you opens, issuing a kyphotic man with a disfigured face who lurches towards you with a massive pair of scissors. He holds them aloft, poised to snip your head clean from your shoulders. It's then that you shift into Oh Shit mode, turn back the way you came and pound down the once-dull hallway that will likely be splattered crimson with your blood in a minute or two.

Those of you who lack the hunger for tension and scares in your games have likely written off Clock Tower (Clock Tower 2 in Japan) at this point. However, I'm willing to bet that some of you are probably salivating at the prospect of a terror-ridden experience wherein you are the helpless prey of a depraved maniac. 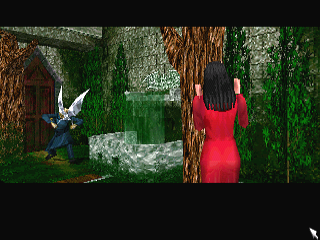 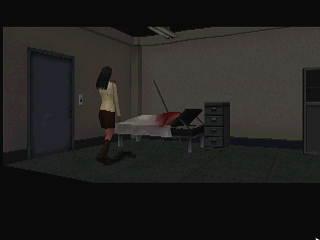 Clock Tower has some bite to it, mostly because you are not as enabled as Leon Kennedy or even Alan Wake. Your choice of heroes includes a school girl, her not-combat-trained friend, an investigator, and a reporter. In other words, you're screwed. You guide each character through three different point-and-click environments, searching for escape from the aforementioned lunatic, Scissorman.

While scouting for each level's goal, Scissorman will appear. No, there aren't any loose conditions that cause the psychopath to manifest. He simply appears, no matter what you do. You open a locker and Scissorman is inside of it. You investigate a room and Scissorman is waiting for you within. You walk down a dull hallway, Scissorman is right behind you. Encountering him in any case and you'll default to your main line of defenses, which consist of running like hell while trying not to wet yourself and hoping that that the somewhat clunky point-and-click mechanics don't cause you to falter in so doing. You could mash the "Panic Button" to expedite your escape, but at the cost of stamina, reducing your chances of survival. Should Scissorman catch you with your stamina weakened, then both blades of his deadly weapon will find their way through your sternum. Game Over.

There are no sledgehammers to defend yourself with, nor any guns with conveniently placed boxes of bullets in places where they wouldn't logically be found (why is there a box of shotgun shells in this office desk?), nor even a climber's pick or a flashlight. Instead, your alternate means of defense are far weaker and not so reassuring. For instance, some rooms contain single-use event items like harsh chemicals or bludgeoning items that can throw the hunchback off for a moment, allowing you to escape.

Regardless of the beating Scissorman receives, he always shambles back onto the screen, bloodlust as unquenchable as before. This is where hiding becomes a viable option. Some areas allow you to lock yourself in a closet or disappear behind a curtain. Most of the time your foe will approach the safe place, stare at it for a few seconds, then limp away. Crisis averted! However, he's not a complete moron and catches on to your habits quickly. I remember using a certain closet in the final act too many times, thinking it would always work. On one occasion, Scissorman stared at the closet for a few seconds and, instead of limping away, raised his scissors and thrust them through the wooden door. My character cried out with a labored, "Aggguhggh!" while I sat there with my jaw slack. I thought that I had stumbled upon the perfect interactive horror experience at that point, but then I considered the flaws... 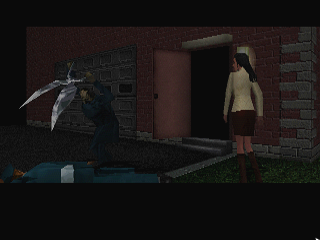 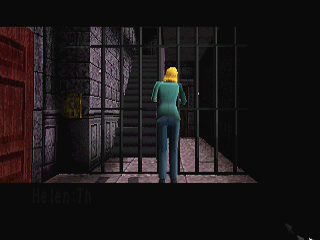 Clock Tower is not without fault. For starters, you have the double-edged sword that is the utterly abysmal voice acting. On one end, you'll cringe at everyone's overly expressive or lackadaisical voice work. I particularly remember a certain cameraman who READS. LINES. WORD. FOR. WORD. WITHOUT. ANY. EXPRESSION. There are a select few people, though, who will fall in love with some of the awful line reading. Some of them happen to populate the website badmovies.org, myself included, and will leap readily at what sounds like an interactive b-movie. I mean, think about it: semi-exploitative concept (antagonist is a person with deformities), helpless female victims, a silly '80s-horror-film-like plot, and terrible acting. All it needs is "Special Effects by Tom Savini, Directed by Tobe Hooper" to complete the setup.

Voice acting, though, isn't the game's only issue. There are a few uninteresting interludes where you speak to various characters in throughout Oslo, Norway to gather information on Scissorman. For the most part, these sequences hamper what should be a tightly-paced horror adventure, but not enough to sink the game entirely.

There are also some frustrating points, especially in the final stage, where you'll exhaust every option and click on anything, however ambiguous, to advance. With ten different endings, there's a wide variety of bits of information, items, and elements to interact with in order to secure the best ending possible. A few of them are fairly obtuse, which can make obtaining the "true" ending daunting without a walkthrough.

Otherwise, though, Clock Tower is a solid horror title. It may be dated, but it's still a creepy experience that fully utilizes every day environments and characters. This is a title that understands and appreciates fear-inducing gameplay by thrusting you into relatable situations with a (poorly acted) human cast. Pop it in this Halloween, or seek out its SNES predecessor, turn out the lights, and prepare to die.
3.5/5

© 1998-2020 HonestGamers
None of the material contained within this site may be reproduced in any conceivable fashion without permission from the author(s) of said material. This site is not sponsored or endorsed by Nintendo, Sega, Sony, Microsoft, or any other such party. Clock Tower is a registered trademark of its copyright holder. This site makes no claim to Clock Tower, its characters, screenshots, artwork, music, or any intellectual property contained within. Opinions expressed on this site do not necessarily represent the opinion of site staff or sponsors. Staff and freelance reviews are typically written based on time spent with a retail review copy or review key for the game that is provided by its publisher.